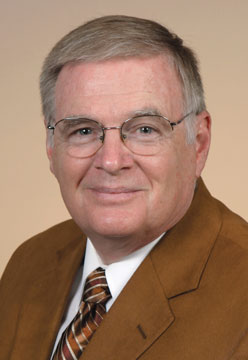 J. Denny Weaver is a member of Madison (Wisconsin) Mennonite Church and an emeritus professor of religion at Bluffton (Ohio) University.

The clerk who rang up my wife’s purchase was visibly disturbed and apologized profusely when the sale registered $6.66 but was greatly relieved when she discovered an error that changed the final bill. Meanwhile, we are currently in the midst of a seemingly neverending presidential election campaign.

The question for this article is, What do these two things have in common? And my immediate answer is, They both involve religion in public life.

That answer may seem like a reach, but let me explain. An election year raises questions of identity. Democrat or Republican or something else? And most of us, including me, care a lot about the outcome of the election. After all, we live here, and one way or another, the outcome of the election will have an impact on our lives and the lives of other people in our community.

But apart from these political loyalties, we need to remember that our calling as Christians supersedes our national citizenship. And as much as we may believe that one policy or another is closer to the way of Jesus, the advancement of the reign of God on earth does not depend on actions by the government of the United States.

Religion enters the presidential campaign because some candidates make a prominent statement about their “Christian,” that is, Evangelical credentials. Other candidates claim faith but without making as much public display. But no one is running as an avowed atheist. Some version of Christian faith seems to be an unofficial requirement for the highest office in the United States.

I am dragging the second presence of religion in by its horns, so to speak. I am thinking of the so-called Anti-Christ, the figure whose “mark” was feared by the upset clerk. The figure of the Anti-Christ comes from the images in Revelation 13. First appears the dragon in verse 1. This is the big red dragon from the previous chapter, which was defeated and thrown down to earth after attempting to grab the baby that was taken up to heaven. This defeated dragon had seven heads with seven crowns and 10 horns. The seven heads with their crowns refer to the seven crowned emperors between the time Jesus was crucified and the writing of Revelation. There was also a short time when three more men claimed the imperial throne without actually being crowned. Those three plus the seven would be the 10 horns on the dragon. The dragon is a parody of the Roman empire and is also called Satan and the Devil.

The dragon that represents the Roman empire is also presented as a symbol that signifies universal evil. In 13:2, a beast appears out of the sea. Like the dragon, it also has seven heads and 10 horns and 10 crowns. Their similarity is emphasized when the dragon confers its power and authority on the beast. One of the beast’s heads appears to have recovered from a mortal wound, which amazes the people of the earth. They worship the dragon and the beast that seem invincible.

Like the anxious clerk, many Christians see this beast as the prediction of a coming, evil ruler called the Anti-Christ. Actually, representatives of this beast have appeared many times, but not in the way described in popular imagination or on Internet prophesy websites.

These images in Revelation are not predictions. It is ludicrous to think that a writer 2,000 years ago could envision a prediction comprehensible to readers in late first-century Asia Minor concerning items still two millennia from being invented—a world linked by computers powered by electricity running software analyzing data stored in the cloud. It is obvious that to understand these symbols, we should look to the first century.

Earlier, I wrote that the seven heads represented seven crowned emperors between the time of Jesus’ crucifixion and the writing of Revelation. The head with the mortal wound recalls the legend about Nero. He was so evil that a rumor circulated that he would return from the underworld to do more damage. Think about the second beast—two horns like a lamb but speaking like the dragon. This second beast is a satirical representation of an imitation Christ, an anti-Christ, a figure that is the opposite of Christ. Demystify the figure and call it a not-Christ.

The story of Jesus reveals a nonviolent Jesus. This not-Christ figure makes people worship the death-dealing, sword-wielding beast that exercises all the authority of the death-dealing, sword-wielding dragon. These images are not predictions. The not-Christ is a comparison of Jesus the nonviolent lamb with the sword-wielding emperors who exercised power in the world of that time. Further comparisons are possible. In the New Testament, Jesus reveals God, and the Spirit testifies to Jesus and to God. Notice the parody parallel as Beast II witnesses about Beast I, who reflects the Dragon/Empire.

There is a reason for making this parody of dragon and beasts over against God, Jesus Christ and the Spirit. In the late first century, when Revelation was written, there was little harassment of Christians in the Roman empire. Christians were starting to be comfortable with empire and emperor and perhaps to participate in the yearly ceremonies that pledged ultimate loyalty to the emperor as divine. With this parody of dragon and beasts, Revelation was warning readers to remember the true character of the emperor and empire.

Revelation delivers its message in apocalyptic language, but once we recognize its real-world application, we find that message other places in the Bible as well. The well-known story in 1 Samuel 8 describes the harmful impact of a king. When the people clamored for a king “like all the other nations,” Samuel gave them a warning. The king will conscript their children into his army and he will take their best fields and tax their grain and wine for his officers. Micah 3:9-12 has a description of corrupt government. Here rulers are chastised who take bribes but claim the Lord is with them.

In light of this warning from Samuel and the description of corrupt rulers in Micah, the warning about the not-Christ in Revelation 13 is not surprising. It is another genre of literature that makes the same general point, namely, not to put too much trust in the world’s rulers.

It seems not much has changed from the biblical era until now. Rulers still conscript young people into their armies and take a lot of tax money to pay for military pursuits. Political leaders still do things for bribes, although the Supreme Court and recent campaign laws now allow big bribes to be redefined as campaign donations. The United States claims to stand “under God.” The presidential candidates publicly identify as Christian or Judeo-Christian. Notice that these candidates ”under God” are willing to wage war. Even the candidates-—and the president— most identified as peace candidates are willing to wage war and send American young people to foreign countries to kill and be killed.

To me, these actions reflect the warning from Samuel and the condemnation from Micah. And in the language of Revelation 13, proclaiming Christian faith and waging war resonates with “had two horns like a lamb and it spoke like a dragon.” In the image of Revelation 13, all these candidates are running for “not-Christ.”

Wars have been fought in the name of Jesus ever since the fourth century, when Emperor Constantine declared himself a Christian and put Christian symbols on the shields of his army. In that sense, there have been so-called anti-Christs ever since. But these not-Christs are not the fulfillment of a prediction. It is merely picturesque language that distinguishes the way of the nonviolent Jesus from the way political rulers act.

In the midst of claims on our identity in an election year, the images of the dragon and two beasts become a colorful reminder of where our ultimate loyalties lie—with the resurrected Jesus, even if our nation claims to be “under God.”

Having our loyalty with Jesus does not eliminate caring about the coming presidential election. But even as we care about the direction our “dragon” takes, we should remember that the ultimate outcome of history has already been decided in the resurrection of Jesus.

When I am most worried about where our nation is headed, I read Revelation 13 again and remind myself that even though the presidential candidates are running for “not-Christ,” the ultimate outcome of history is with the reign of God. The reign of God endures, even as presidents and nations and empires pass away.

Read the rest of our original features and Bible studies on “Engaging Politics” in the October issue of The Mennonite.