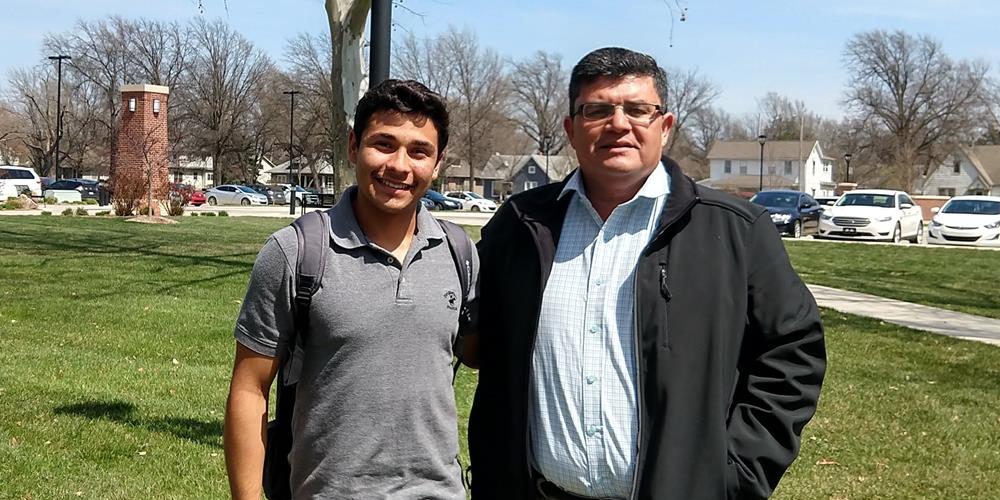 When SEMILLA (Latin American Anabaptist Seminary) director Willi Hugo Pérez spoke at Hesston (Kansas) College this spring, his encouragement to be biblically grounded in good Anabaptist peace theology was well-received, yet there was something even more inspiring.

He shared how he struggled with hate after his late father, Marco Tulio Pérez, was assassinated, says Michele Hershberger, Bible professor at Hesston College, who introduced Pérez. After his mother, Rebeca Lemus, told him he was becoming what he hated, he said he did much soul-searching, which led to a transformation that brought him to his current role.

In his role at SEMILLA, a partner of Mennonite Mission Network, he now has an impact on the lives of many students who use what they learn to work for holistic justice and peace in their churches and communities.

“He made great connections about the importance of good biblical study, which transcends all cultures,” Hershberger says. “What I appreciated most was his personal storytelling, which was when the importance of the theology of nonviolence and peacemaking became so very real for the students and me. His personal story incarnated the great significance of Jesus’ work for peace and justice as well as our work today.”

Mennonite Mission Network partners with SEMILLA, based in Guatemala City. It is an initiative of 12 Anabaptist conferences from Mexico to Panama that provides opportunities to study at Bible institute and higher levels. In 2018, about 560 students participated in the basic formation programs or Bible institutes associated with SEMILLA, and 227 studied in the higher-level programs.

With online courses now, SEMILLA has the potential to reach many more Spanish-speaking students around the world, Shelly says. For the churches of the region, SEMILLA plays a critical role in developing leaders who understand Scripture from an Anabaptist perspective.

Ministry that grows out of the theology SEMILLA teaches is exemplified at Casa Horeb, a Mennonite congregation in Guatemala City. It hosted a commencement event last year for people who completed school equivalency courses offered through its ministry, Educación para la Vida (Education for Life, or EduVida).

Casa Horeb‘s director, Elena Bercián, recalls one woman who had been mired in alcoholism and missed many classes. “But last year, she was president of her class and took responsibility with good grades,” she says. “She wasn’t the best student, but I told her she was a star because she was able to achieve a lot.”

SEMILLA also hosts a Spanish-language learning program, CASAS, that is available to anyone who wants to learn Spanish in Guatemala. After Pérez’s chapel presentation in the Newton offices, Ken Regier, director of Program Human Resources for Mission Network, says: “I love that we get to partner with SEMILLA and the CASAS program. I love that it is a way for people to gain some cross-cultural experience in a manner that is mutually beneficial to everyone involved.”

CASAS supports SEMILLA’s work while providing income to host families and helping hands for local agencies, says Regier. “Participants expand their worldview and develop direct relationships with host families. It is also a great chance to put language skills to the test and work intensely on improving those skills.”

Both SEMILLA and CASAS strive to model that love is the heart of service in a world of need, Pérez said during a Tabor chapel.

“God calls us to imitate Christ to serve and be agents of life, justice, blessing and transformation in this world,” he said. “This is in response to God’s love. ‘We love, because he first loved us’ (1 John 4:19). The love of God that acts in us impels us to worship him and follow him and serve him in his transforming mission. Service must be the nucleus and expression of our faith. The fullness of being people of faith is reached when out of love we become a balm for the wounds and sufferings of the world.”

Shelly says: “Pérez’s trip was an opportunity for Mennonite Mission Network to bring to Kansas churches and schools both the inspiration of Latin American Anabaptists and ways to be personally involved. For SEMILLA, it’s important to generate donations and promote the CASAS program. It was mutually beneficial to be able to share together in this way.”