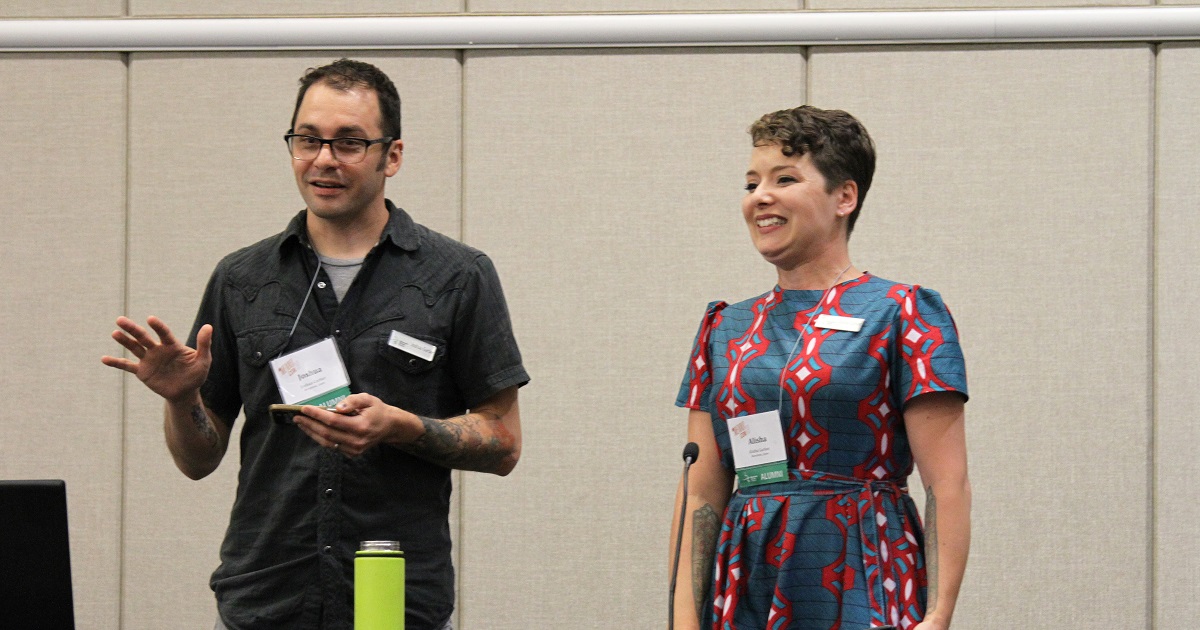 Editor’s note: MennoCon19 includes hundreds of seminars, and we can only report on a few.

The seminars at MennoCon19 serve various purposes and address various audiences. Some are more practical, some are more idea oriented. Here are brief summaries of four seminars from today.

This morning I attended “Listening for God’s Voice at Every Age and Stage” by Karla Minter. She organized her presentation into three sections: your story, prayer and the biblical story.

In reflecting on your experiences, Minter said, you should first practice ordinary awareness, i.e, observing what is going on around you. Then you should consider a more spiritual awareness, i.e., what is the meaning of what’s happening around you. Finally, she said, pay attention to those times when you experience a kind of union with God.

Minter suggested a practice of a prayer of awareness in which you ask, What was the high or low point of the day? Then ask, Why?

She used the biblical story of Samuel’s call and his interaction with Eli to illustrate the awareness of the ordinary and the spiritual.

Practicing this awareness regularly can draw us into a closer relationship with God, she said.

After worship and lunch, I headed to “Postmodern Worship That Crosses Barriers” by Joshua and Alisha Garber, Mennonite Mission Network workers in Spain.

They related their experience of introducing new worship styles, particularly with music, into different situations, including Mennonite congregations and the chapel services at a university in Lithuania.

Alisha Garber noted that postmodernism emphasizes that people perceive things from their own contexts, and reaching them requires paying attention to those contexts. That may mean doing worship in new and different ways in order to reach people turned off by church or religion.

Joshua Garber said that creativity and risk are important in making worship that connects with people from different perspectives. He called postmodern worship “guerilla warfare” that requires being able to adapt and evolve.

But when you make changes and try to break down barriers in order to make space for others, this can make people uncomfortable, he said.

The Garbers offered suggestions, such as to know your audience, rebaptize songs with Anabaptist theology, set goals with yourself and your team, evaluate risks afterward and, while quality is important, earnestness and authenticity are more important.

She asked attendees to name stories in the Bible that are troublesome, then she looked at several of these.

She suggested looking at stories in the Bible with hospitality, listening before making a judgment about it. Ask what concerns the story reflects and what questions it is trying to answer.

Next, Good suggested reading backward from Jesus. The early church, she said, saw Jesus as providing the key to many of the stories in the Old Testament, and she provided examples from Exodus 12 and Joshua 6.

However, she warned, we should not read Jesus selectively. While Jesus did not judge sinners, he confronted religious people and said their actions would have consequences.

Her final point: God works with imperfect people, and that includes all of us.

Putting Jesus on the Ballot

The final seminar of the day for me was “Putting Jesus on the Ballot” by Scott Peterson, who is also a pastor at Trinity Mennonite Church in Glendale.

Peterson addressed the political tensions in our country and called people to follow Jesus rather than partisan politics. At the same time, he did not call for abandoning political engagement.

He noted that everyone has political opinions they think are right, but when we apply Christ to politics, we are wildly inconsistent. “We have dueling Jesuses in churches,” he said. “Social media is filled with Jesus bombs” as people try to use Jesus as a weapon.

While governments often have good ends in mind, their means are always violent, coercive. The means of Christ, therefore, are incompatible with the means of government. Anabaptist Christianity, he said, is means-based, not ends-based. It is nonviolent, noncoercive and Jesus-centered.

Our involvement is to hold government to its God-ordained role, which is to minimize evil.

No matter how much we work at creating a good government, he said, it will never be the kingdom of God.