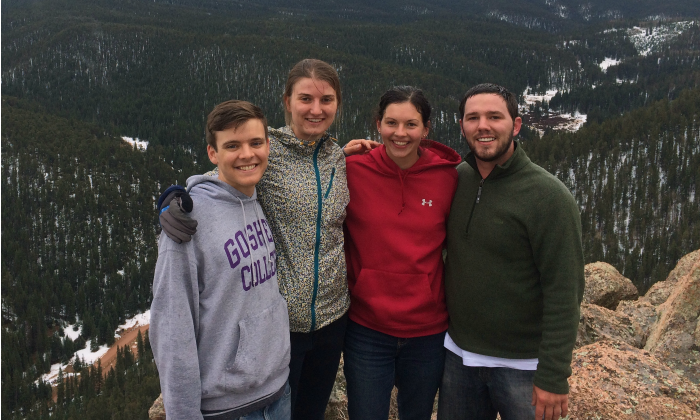 Before volunteering at St. Elizabeth’s Health Center in Tucson, Arizona, Stephen Graber was certain that he had limited knowledge about what’s involved in serving people at a clinic. He just didn’t know how limited.

After the first busy days, the word he kept hearing in his thoughts was “overwhelmed.” By the end of Graber’s one-year assignment with Mennonite Voluntary Service, the words were many: words like “committed,” “dedicated,” and “inspired.”

Originally from Goshen, Indiana, Graber, 24, is now a medical student at the Indiana University School of Medicine-South Bend. He began in August 2016, shortly after completing his MVS assignment. During his junior year at Goshen College, he became interested in being a doctor. Shadowing physicians at a family practice and cancer clinic exposed him to the profession. But his time at St. Elizabeth’s, seeing the passion with which the health providers serve, has strengthened his sense of mission.

St. Elizabeth’s is a faith-based community health clinic that is dedicated to serving the uninsured and underinsured in Tucson. Another vital part of its mission is to provide care to many refugees who come to the area by way of Catholic Community Services. The deft grace with which the doctors, nurses and staff manage language and cultural barriers left a profound impression on Graber.

“They seemed to do it with such ease,” he said. “And the leadership team was very thoughtful and driven in finding solutions when cultural barriers to care did arise. It was an excellent example of their commitment to care for some of the most vulnerable people in our community.”

Graber worked as a medical quality improvement program associate. He assisted the clinic’s leadership team. He didn’t interact directly with patients, but monitored and collected data entered into the computer system by medical providers. He also helped out wherever needed, such as making event posters, moving boxes, and enjoying the lunch potlucks, he said. But from his vantage point, he was able to see the dedication and patient-centered care provided by doctors and nurses, many of whom were volunteers.

“It was evident that much more than medical care was being given,” Graber said. “Many patients encountered many barriers to care such as finances, transportation, and more. The providers, nursing staff, and administrative staff at St. Elizabeth’s work very hard to help patients manage these barriers and receive everything that they can. It was inspiring to me to see how hard they worked for some of the most vulnerable members of the Tucson community.”

In medical school, Graber hasn’t yet delved into the complexities of being a healthcare provider in America. However, his time at St. Elizabeth’s shed some light on the nation’s debates over healthcare, such as the likely repeal of the Affordable Care Act. Known also as “Obamacare,” the ACA has increased the number of Americans who have health insurance and it has slowed the rise of healthcare costs. However, in many cases, costs are still skyrocketing.

“It has already become evident that time, and thus, money, seems to be the biggest barrier to providing compassionate care for patients,” Graber said.  “It is a challenge to help patients feel heard and understood while simultaneously accomplishing everything that must be done and providing quality healthcare.”

The healthcare difficulties have frustrated patients and providers. Patients fear living sicker and dying younger. Many doctors, nurses and other providers who entered the field inspired by a sense of calling have become disillusioned. Many young people who would seek careers in medicine have been turned off. Not Graber, though.

“I know that a lofty call to ‘spreading goodness’ won’t always cut it, but I think we should always be looking for some way to find meaning in what we do,” he said.  “My time in MVS volunteering with so many driven individuals, has helped me keep this in mind as the ultimate reason for the long hours and many tests.”

Since 1944, MVS units have enabled young Mennonites ages 20 and older to integrate their Christian faith through practical service. MVS participants live in a house together sharing meals and mutually supporting each other. The units are hosted by local Mennonite churches that encourage the volunteers. Placements at local nonprofit organizations provide chances to develop skills and gain new experiences that can lead to future employment.