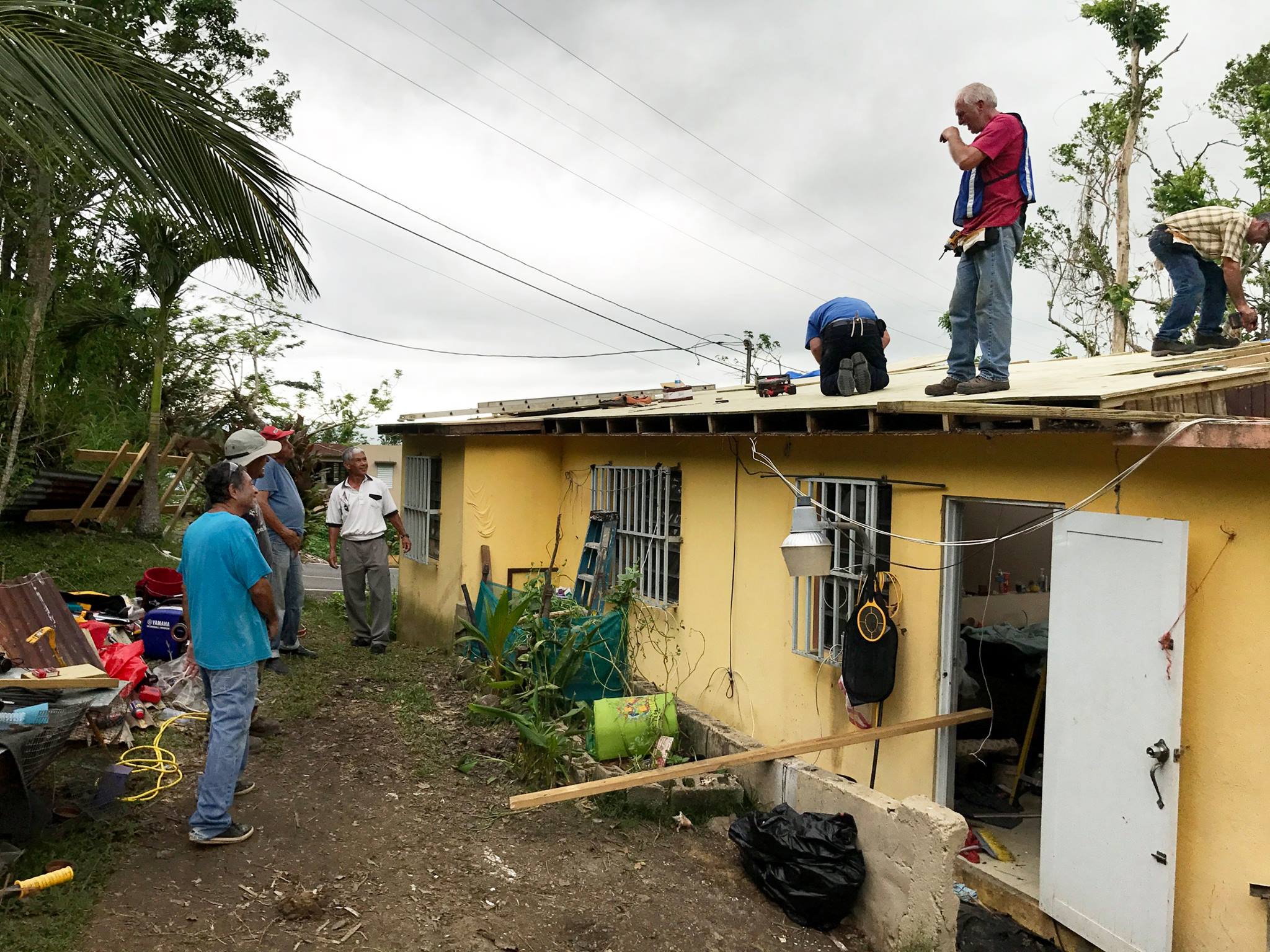 A variety of Mennonite agencies—both in the continental United States and in Puerto Rico—are finding ways to reach out and offer support during this recovery period.

Academia Menonita Betania, a Mennonite Education Agency (MEA) school serving 160 children in grades pre-K through 10th grade, reported major damage, including water and wind damage to the school that made some classrooms structurally unsound. The school will need a roof replacement and will also need to replace technology and other equipment. The school is also a service location for Mennonite Mission Network’s Mennonite Voluntary Service and SOOP programs.

However, despite still being in a recovery mode, the school reopened its doors on Oct. 23 and is actively working to enroll other students who haven’t been able to return to damaged schools.

“We are going to be here — we are not going to close — we are going to do great things for our students,” said school administrator Luis Yavier Velez Soto in a Facebook video. “Thank God for the opportunity that AMB has for the future.”

MEA leaders have challenged other Mennonite Schools Council member schools to raise at least $1,000 to support Betania and several schools have already responded and exceeded this goal.

“Almost all the schools are stepping up to provide financial support for Betania,” said Elaine Moyer, senior director for MEA and the Mennonite Schools Council, on Oct. 24. “MSC schools support each other in many ways and this is just one of them. There’s an invitation to be part of an organization that will provide networking and support for each other as we work to provide faith formative education, in good times and crises.”

At Iowa Mennonite School, Kalona, Iowa, both students and community members got involved to raise over $1,600. Before a home varsity volleyball game in October, a parent of one of the players shared with fans about damage sustained to Betania and invited them to participate in a freewill offering. The offering raised over $1,300, including donations from fans of Louisa-Muscatine High School, the opposing team. Later that week, the student-led Compassion Club sponsored a comfy clothing day, where students could donate money and in turn be allowed to “ditch the dress code.” IMS has a total of 83 students and the event raised $398, well above the suggested $2 per student donation.

IMS Enrollment Director Candi Schmieder said raising support for a sister school was a good way to put the school’s mission and commitment to service into action. “Our mission statement says we prepare students for lives of Christian discipleship, peacemaking and service and this kind of work just fits in with that. It’s amazing how Betania is pulling together and able to re-open on Oct. 23 and I hope we can help in these and other ways.”

and took a freewill offering at a volleyball game as well. Mt. Pleasant Christian School, Chesapeake, Virginia, a school that was previously connected to MSC, raised funds for Betania in honor of former teacher Rose Moyer Bergey who passed away in October and who had visited and supported schools in Puerto Rico. At Dock Mennonite Academy, Lansdale, Pennsylvania, the school’s student senate spearheaded efforts to raise over $2,000 through offerings collected in chapel, by the boy’s soccer team and in the cafeteria.

Organic fundraising efforts are springing up across the country, too. A Nov. 3 ice cream social co-sponsored by MEA and College Mennonite Church in Goshen, Indiana, drew 70 attendees and raised $10,300. In addition, College Mennonite’s Women’s Group donated an additional $1,500 to the efforts. Mennonite Mission Network has also joined in the fundraising efforts and helped to spread the word about Betania’s needs.

Mennonite congregations and schools were not spared by the storm. In an Oct. 8 report on Facebook, Kevin King, executive director of Mennonite Disaster Service, shared that three out of the 18 Mennonite churches they were able to be in contact with were destroyed, including damage sustained to pastors’ homes. Eileen Rolon, the MDS unit leader in Puerto Rico, had the roof torn off her house, not an uncommon occurrence for many locals during the storm.

In a Nov. 3 update, MDS leaders noted the progress that has been made thus far in Puerto Rico, in coordination with Juan Carlos Colón, moderator of the Mennonite Church in Puerto Rico. Efforts have include shipping 800 cartons of Mennonite Central Committee (MCC) canned meat to the island, helping to ship containers of water, cleaning supplies and personal hygiene materials, repairing Rolon’s roof and offering cash grants to Mennonite pastors and homes. In addition, MDS has distributed generators to many churches and homes. A four-person volunteer team returned from Puerto Rico on Nov. 4.

MDS hopes to send another small crew in the next two weeks to start working alongside a local contractor to do repair and clean-up at Betania. King says that MDS and other faith-based organizations are all sending small teams because finding housing for volunteers and not overburdening local hosts is a key consideration.

“Even now we are still in a life-sustaining mode,” said King in a Nov. 6 interview. “We’re focusing on providing food, water and shelter.”

From Nov. 17-18, Mennonite pastors and spouses in Puerto Rico are also invited to a two-day MDS-sponsored retreat to process their experiences with Hurricane Maria and to talk about their needs moving forward. King says MDS first learned about the importance of hosting such a gathering after Hurricane Katrina in 2005.

“This is just a time of bearing one another’s burdens,” said King. “It’s a time of praying, singing, worship, crying together and more. And MDS will ask, Where were you when the storm hit? How have you been harmed? What would give you hope? What do you need?”

MDS is also working with other Mennonite organizations to find additional means of support. MCC has seconded local worker Rolando Flores to MDS to help with relief efforts. MDS has purchased a truck for Flores, and he’s working to coordinate distribution of supplies when they arrive in Puerto Rico.

Atlantic Coast Conference (ACC) is working with MDS and hopes to raise enough funds to provide 2,000 food parcels and transport them to Puerto Rico. The initiative grew out of requests from Mennonite pastors in Puerto Rico who are struggling to care for vulnerable people without access to food and clean drinking water in their congregations and neighborhoods. Puerto Rican Mennonite Convention congregations were affiliated with ACC as associate members before stepping back this spring.

ACC conference administrator Brook Musselman said that since spring, ACC members have been looking for ways to continue to collaborate with congregations in Puerto Rico.

“After Hurricane Maria, there was a large amount of energy behind making some meaningful contribution to our brothers and sisters on the island,” wrote Musselman in a Nov. 6 e-mail.

The conference will also host three nightly events from Nov. 13-15 to assemble the parcels at MCC Ephrata’s Material Resource Center in Pennsylvania.

In addition, MDS partnered with Mennonite Health Services (MHS) to provide funding to help send Jim Alvarez, Everence Financial CFO, and Rose Gillin, M.D., on a trip to make an assessment of health and human services needs in Puerto Rico. Alvarez and Gillin grew up in Puerto Rico.

“Everything looked different–devastated–especially the trees,” said Gillin in an Oct. 17 news release. “As we talked with people, we could hear their pain, even as they were working together.”

Many hospitals are still running on generators that are now struggling after weeks of continuous use, and pharmacies are often unable to fill prescriptions because they are unable to make contact with insurance companies. The report noted that some diabetic patients are unable to refrigerate insulin, and individuals on dialysis are facing widespread challenges in access to treatment.

The MHS report stated, “Those who are not physically ailing are still subject to damaging amounts of mental and emotional stress, causing many to lose sleep and fear for their safety. The inability to communicate and the lingering possibility of yet another hurricane have produced anxiety in great measure. Widespread trauma has revealed a need for specialists and counselors in this area.”

The Mennonite hospital system in Puerto Rico, Sistema de Salud Menonita, has reported that more than 100 employees will need to rebuild or replace their homes. The organization has donated $500,000 to support these rebuilding efforts and hopes to raise $500,000 more.

You can continue to support fundraising efforts for Puerto Rico by donating to Mennonite Disaster Service or Mennonite Education Agency and Mennonite Mission Network.