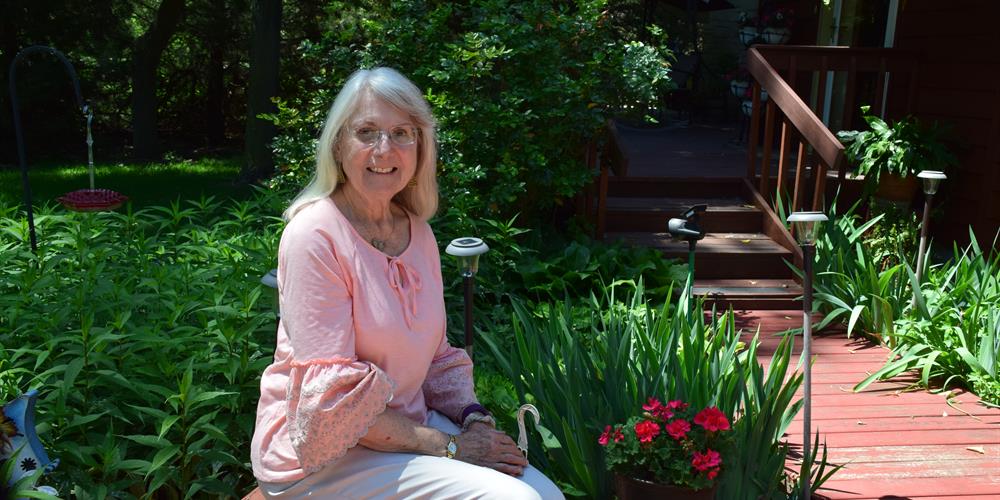 Photo: ​Elizabeth Raid, pictured at her home in Newton, Kansas. She participated in a SOOP (Service Opportunities with Our Partners) assignment at Koinonia Farms in Americus, Georgia, in January 2019. Photo by Laurie Oswald Robinson

Ever since Elizabeth Raid was a student at Bluffton (Ohio) College [now Bluffton University] in the mid-1960s, she had wanted to visit Koinonia Farm in Americus, Georgia.

It took her nearly 50 years to do it.

Her desire was born after her father, Howard Raid, an economics and business professor at Bluffton, invited Clarence Jordan to speak in chapel. In 1942, Jordan founded Koinonia, an intentional community that sought to embody the kingdom of God. During heightening racial tensions during the 1960s, Jordan spoke on campuses and in churches to elicit support for Koinonia’s ministry. His prolific writing includes the Cotton Patch Gospel, which was made into an off-Broadway musical.

Koinonia’s members bridged differences across race and class, promoted peace and tended a farm in the spirit of the early church. Raid said she and many students sat in chapel, paying close attention as Jordan mesmerized their young hearts while reading directly from the Greek New Testament. He spun stories of life in southern Georgia that spoke of living out Jesus’ gospel of peace and justice in humble, earthy ways.

Raid, inspired by how Jordan modeled living out Jesus’ gospel of peace in a turbulent era, sought to live a similar vision as an Anabaptist writer and a church leader. Yet her dream of visiting the community was deferred until this January. That’s when she accepted an invitation to join longtime friends Rachel and Ivan Friesen as SOOP (Service Opportunities with our Partners) volunteers at Koinonia. SOOP is a service program of Mennonite Mission Network.

One aspect of Raid’s dream, however, did not unfold as she had planned. Three months earlier, in October 2018, her husband, Lou Gomez, Jr., died unexpectedly. It was eight months after their SOOP assignment in Tucson, Arizona, but prior to their plans of visiting Koinonia.

“In our Tucson assignment, we got our feet wet, but after Lou was going to retire this fall, we were planning to do some longer-term assignments, including Koinonia,” she said during a recent interview at her home in Newton. When he died just shy of 69 years old, Gomez was serving as pastor at a Mennonite retirement community where both had served as the pastoral team.

Raid said she felt deep disappointment not having Lou at her side. Yet she also felt comfort. As she packed pecans, worked in the vineyards, helped with common meals and prepared packs of clothes for detainees, God’s care softened the soil of her grief. The long-dormant seed took root, and hope began to blossom.

She had been thinking how hard and long the winter would be without Lou and wondered how she would endure it, Raid said. Then the serendipitous invitation from her friends sprang up as they sought to help comfort her. With some quick paperwork, she was on her way to fulfilling her dream.

“It was so nourishing to be in nature and to have meaningful interactions with people who are living out their faith,” she said. “Perhaps, as Clarence Jordan planted seeds that sprouted into other ministries such as Habitat for Humanity [founded by the late Millard Fuller, a former Koinonia member], something new could come to life in me through this assignment.”

Arloa Bontrager, director of SOOP, says Raid is one of many volunteers who experience a new blossoming of purpose and hope when they engage with Mission Network’s partners across the United States. “Though one can support these partners from afar with prayers and financial gifts, there is nothing like sharing their on-the-ground realities by becoming the hands and feet of Christ,” Bontrager says.

In addition to being renewed at Koinonia, Raid also was inspired by former U.S. President Jimmy Carter, who taught a Sunday school class she attended at Maranatha Baptist Church in Plains, Georgia. It was the Sunday preceding Martin Luther King Day and the text was Mark 2:13-22. In the text, Jesus was calling Levi and eating with sinners.

“President Carter said that even though we can’t change the whole world, we can make a difference in one person’s life,” Raid said. “That may be offering words of encouragement, listening or simply being present. That is planting a seed. Acts of kindness may lie dormant, but when nourished, they will grow.”

Raid said the experience taught her that even amid the uncertainties of life, one can volunteer in programs like SOOP and experience healing and hope.

“What I had envisioned our retirement would be together as a couple did not turn out,” she said. “I encourage others not to wait until everything falls into place. Now is the time to listen to the Spirit’s prompting and let the seeds of your dreams sprout and bloom as God gives you opportunities.”