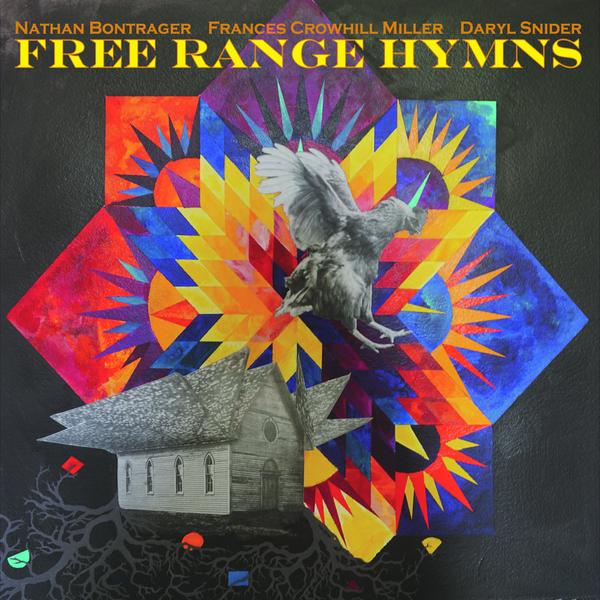 “I had noticed there were a couple of people who came from the same singing tradition as [I did],” she says. “And when we jam on those tunes from our church traditions, something magical happens.”

Snider (the other half of Crowhill Miller’s Lancaster, Pennsylvania, band Sopa Sol) and Nathan Bontrager, a professional musician based in Germany, who immediately saw resonances in the project.

The idea for the album was born in August 2015, but it wasn’t until August 2017 that the album, Free Range Hymns, was completed and launched. The recording was delayed by some traumatic

events—illnesses and losses—but the trio says the process of creating music together in difficult times was healing.

“This project has been incredibly buoyant for me,” says Crowhill Miller. “It’s really lifted me up at very low points. None of that was planned, but this ended up being the best thing possible I could do during some of the most stressful times of the past few years.”

The trio selected hymns and used traditional tunes as a basis for improvisation.

“The album is an outgrowth of our different musical personalities,” says Bontrager. “We’re using hymns to put certain borders around it in a positive sense, but to try to qualify any of that in an easy definition isn’t possible. Really it’s just that this is what it sounds like when the three of us play together.”

The trio hosted a release concert in Lancaster on Aug. 24 and invited the audience to participate in singing along with the hymns, despite the updated tunes.

“We tried to enter into the singing in an abstract way with people, but it worked reasonably well,” says Bontrager. “That was a very concrete example of taking the oldest piece of music we have as

Anabaptists and working with that in a way that’s hyper modern.”

The group hopes to have opportunities to provide workshops and future concerts that continue to engage congregational singing.

Crowhill Miller and Snider first met as students at Eastern Mennonite University’s Center for Justice and Peacebuilding in Harrisonburg, Virginia. They found themselves working to use music as a tool for trauma healing, and a band was born. Bontrager started to collaborate with the duo several years ago, when he found himself looking for musical outlets during extended visits to the United States. Amanda Gross, another graduate of the CJP, provided the album’s cover art.

Bradley Kauffman is the Director and General Editor of Resonate, the new Mennonite worship and song collection project. He attends Cincinnati Mennonite Fellowship.

Covering a range of mostly borrowed Mennonite hymnal favorites, the selections are each extracted from Hymnal: A Worship Book (1992) and its forebears. J. Randall Zercher’s I Bind My Heart and the Amish stalwart O Gott Vater represent original Anabaptist work. Sopa Sol rewards the listener with renditions that journey among chamber music (Gott ist die Liebe), African-inspired reimagining (When All Thy Mercies), folk transformations of composed work (O Sacred Head and I Bind My Heart) and a straight-ahead, traditional American treatment (In Lonely Mountain Ways).

Delivering far more than strophic repetition, Sopa Sol’s arrangements open cinematic soundscapes, paying tribute to the past while inviting the ancestors to a once-forbidden dance. With sturdy vocals, the production work features an instrument-forward mix that pays off as the strong instrumental work opens space alternately contemplative and mischievous yet somehow of a whole.

North American Mennonite worship expanded to include songs of the global church in the last quarter century. These influences emerge in Sopa Sol’s improvisatory handling of traditional Western tunes. They extend a hand to Hans Leo Hassler’s O Sacred Head, as if to say, “There’s someone I’d like you to meet.” A (textless) rhapsodic Klezmer fantasy choreographs the meeting of East and West.

Among the rewards of this collection is the impressive synergy of this consort as they move among diverse families of instruments. Especially charming is Snider’s soprano saxophone, unselfconsciously stepping into the bluegrass texture of In Lonely Mountain Ways. Effective use of ostinati (repeated patterns that support the tune) and simple harmonizations elevate the stature of the tuneful selections chosen for this recording. Concise and illuminating liner notes (provided with both CD and downloadable versions) curate a thoughtful and engaging set.

Free Range Hymns is available for purchase and download at https://sopasol.com/free-range-hymns.