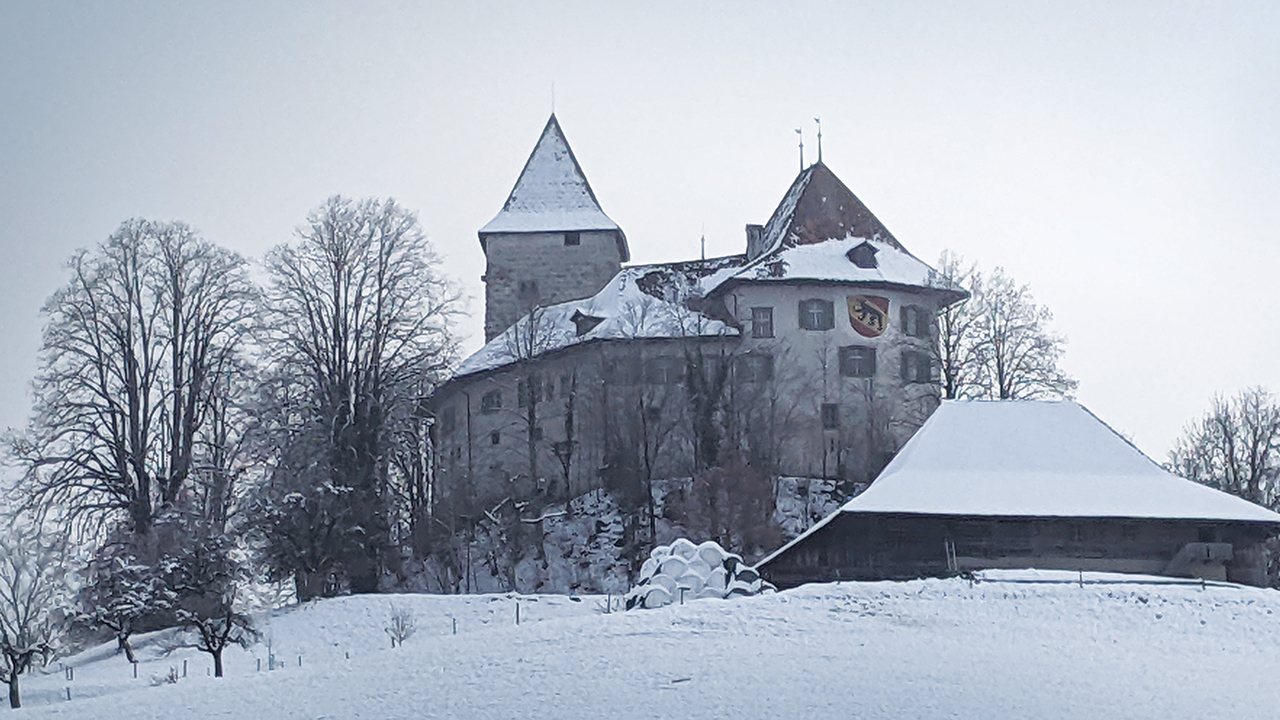 Trachselwald Castle in Switzerland on a cloudy day in December. — Heidi Huber

My family visited the Swiss fortress in late December. Blanketed in snow atop its hill, the nearly 1,000-year-old castle served as a prison for Anabaptists for hundreds of years, holding renegades in lofty jail cells as they awaited execution.

The sky was overcast. A cold snap pulled temperatures well below freezing. The mood was appropriately somber. Our goal was to convey to our children the suffering people once endured just to be able to attend church — which, without authorities threatening beheading or burning at the stake, can become mundane, routine or a chore.

We mounted the worn steps and heard voices from above. Still unseen, they were speaking English.

North American Mennonites have long felt a magnetic pull to this monument of spiritual and/or genetic ancestors’ martyrdom, so I let myself assume we were mere meters away from theological brethren.

We met two men in the narrow passage who greeted us warmly. I introduced us as Mennonites from Kansas, leaving off our country as a superfluous detail for fellow Americans or Canadians.

In response, we learned one man was from Switzerland, the other from Cameroon — both members of the Reformed Church. As I tried to keep one eye on children repelled in three directions by adult conversation, I swallowed my surprise at finding anyone other than an Anabaptist making a random winter visit to an obscure castle jail. Doubly so to find a Reformed member, since that church was primarily responsible for tormenting early radical Anabaptists following an illegal faith. There were 40 executions here at the hands of Swiss authorities from the 16th to 18th centuries, many recorded in Martyrs Mirror.

Our new Swiss friend was delighted to encounter Mennonites. He wanted us to know he had learned much about his church’s history as a result of reconciliation steps that have taken place between the two groups. In 2017, a government official in Bern requested forgiveness for persecution by the church and state. The World Communion of Reformed Churches and Mennonite World Conference are continuing a series of formal conversations, scheduled to culminate in 2025.

After making our goodbyes, my family continued our ascent to the tiny wooden rooms. It was easy to imagine how cold it must have been, but difficult to grasp what it must have been like to be taken from family and face nearly certain death.

My fatherly history lecture concluded, we returned to the courtyard where I rang the doorbell of former Langnau Mennonite Church pastor Martin Hunziker, who lives in the castle with his wife, Eveline. I apologized for showing up unannounced and offered him a copy of the Oct. 8 issue of Anabaptist World, which included an article about a new exhibit about Mennonites yesterday and today at the castle. Though the exhibit is unheated and closed in winter, Hunziker offered to open it for us and commented that the space was still in use as updated jail cells until 2009.

Aside from the traditional prison bars swung open to allow entrance, the space itself felt more like my old high school than any jail I have visited. Each of the exhibit’s spacious rooms is roughly 15 by 25 feet with a window, wood baseboard trim and a telltale mark on the floor of where the toilet used to be, tucked into a private space out of sight from the door.

When I commented about this to the Swiss friend we were staying with, she was amazed that the space felt so hospitable. Apparently it had been shut down more than a decade ago on account of its inhumane conditions for inmates on work release who only used the space for sleeping quarters.

Produced almost entirely in German with audio supplements in English, the exhibit is clearly created with Swiss, German and French visitors in mind. I was relieved. North American Mennonites will come no matter what for the history. (Many have left deeply regrettable graffiti.) But local conversations matter, perhaps even more.

There is also a story to be told about who we are today. Judging by the sentiment of the men we met on that sober stairway, people near and far are ready to listen and learn.