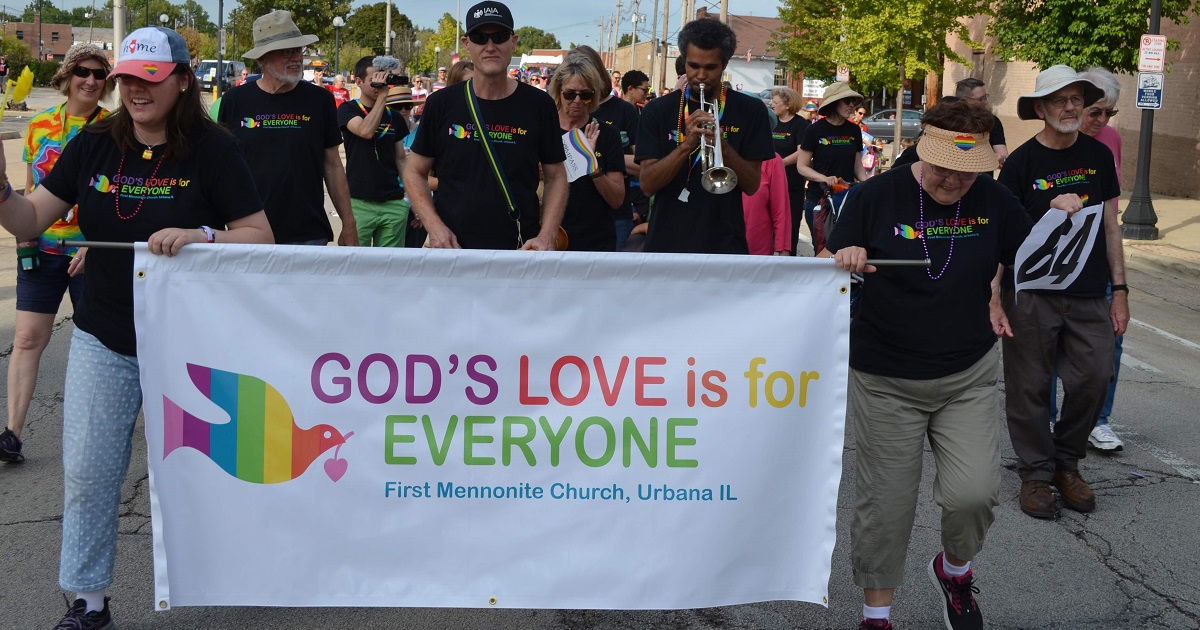 A flock. A family. Branches sprouting from the vine. The bride of Christ. One body. A city on the hill. Scripture is full of metaphors for congregations and the people who compose them.

Laura Brenneman, a chaplain and a member of First Mennonite Church of Champaign-Urbana, Illinois, would add one more metaphor to the list. The image of the church as a shield has been meaningful for Brenneman over the past six months.

The metaphor grows out of a promise spoken by a church elder, Janet Liechty, during a meeting processing Brenneman’s upcoming marriage to Jo (last name withheld on request) and First Mennonite Pastor Michael Crosby’s role as an officiant at the March 2019 ceremony.

“We’ll be your shield,” Liechty said.

First Mennonite is part of two Mennonite Church USA conferences — Central District Conference and Illinois Mennonite Conference. Central District is supportive of pastors who officiate same-sex wedding ceremonies and has a policy that affirms the participation of LGBTQ people at all levels of church leadership, but Illinois’ policies were less clear cut.

Brenneman, who is licensed through both Central District and Illinois Conference for her work as a chaplaincy educator at Advocate BroMenn Medical Center in Normal, knew the congregation might face some pushback for supporting her marriage. She wanted to make sure congregational leaders and members were willing to face what might lie ahead. Instead of worry or hesitation, Brenneman was greeted with a promise of protection.

“What felt most comforting to me is that I knew the church was in a place where they were able to fully offer this support,” Brenneman said. “I have often wondered about church: Is this a place where, when I bring myself and what’s precious to me, I can experience sanctuary? I never thought that church would be that place for me if I were fully transparent.”

The congregation affirmed its support for Brenneman and her fiancée (now spouse), as well as Crosby’s role as officiant. A wedding shower included a prayer circle to bless the marriage.

At the wedding, which took place in North Carolina, a First Mennonite rainbow T-shirt bearing the words “God’s love is for everyone” was on display.

Brenneman and Crosby cite the congregation’s long process of education and discernment on becoming more welcoming to LGBTQ people as instrumental in preparing the church to support Brenneman and Jo.

“We’ve been thinking about steps toward more inclusion for 25 years now,” said Randy Nelson, congregational chair. “It has been a long-term growth process for our congregation, so supporting Laura was a very natural step that was never really in doubt.”

According to Crosby, five years ago there were questions about the need for formal congregational affirmation of clergy participating in blessing same-sex marriages and supporting LGBTQ people in pastoral ministry.

“One of the questions was about timing: Why would we do this now when we don’t have to yet?” said Crosby. “But the answer is that five years later it was so important that we had already done this work…. We didn’t want this to be a discussion about a particular person, and we didn’t want anyone to be treated as an issue.”

Brenneman and Jo both now face review of their credentials from conference and denominational bodies. Jo is an ordained minister in a nondenominational congregation in the evangelical tradition.

In December 2018, three months prior to the wedding, First Mennonite informed both Central District and Illinois Conference of Brenneman’s upcoming wedding and Crosby’s role as officiant. One week later, Central District responded that the conference’s Ministerial Committee had reviewed the letter and that both ministers’ credentials would remain in good standing.

Brenneman and Crosby first heard from Illinois Conference via April 2019 emails from conference moderator Darrel Miller, who said the Church Life Team, which is responsible for conferring and reviewing ministerial credentials, would be in touch about the status of their credentials.

The next contact, in July 2019, indicated the conference would review Crosby’s credentials to ensure that a good congregational discernment process was in place prior to his officiating a same-sex wedding ceremony, and that Brenneman’s credentials would be suspended but could be reinstated if conference policy were to change.

Miller and the Church Life Team cited a letter from Illinois leadership in 2017 that stated the conference will not hold ministerial credentials for a person in a same-sex relationship.

In its July communication, the Church Life Team recommended a conference-wide discussion of the 2017 document in hopes of clarifying conference policy.

First Mennonite leaders, including all members of the congregation’s Spiritual Life Team, responded to the letter, contesting the decisions by the Church Life Team. Congregational leaders cited a 2015 MC USA resolution calling for forbearance related to varying congregational practices for LGBTQ people and objecting to the team’s proposal to treat Brenneman’s and Crosby’s credentials differently.

“It would be theologically incongruous for the church to offer God’s blessings on a marriage and then deny credentials based on that same marriage,” the letter states. “The distinctions between marriage/ministry and review/suspension convey a lack of understanding and respect for the theological convictions of First Mennonite. With respect to Laura’s and Michael’s credentials: affirm them both, review them both, or suspend them both, but do not ask us to violate what we believe God declares about LGBTQ+ persons in our midst.”

Since this July 2019 exchange, the conference has not moved forward with either review or suspension of Brenneman’s or Crosby’s credentials. It is unclear how future conference-level discussions will continue. But for Brenneman, the willingness of First Mennonite members not only to speak about welcome but to live it out, even when difficult, speaks volumes.

“The most important part of the story for me is not just that the church has allowed for my call to be honored and for me, Jo and our relationship to be celebrated but that people see that this is a church that’s willing to engage in some conflict if necessary,” Brenneman said.

“It would be an easy thing to simply withdraw membership in Illinois Conference and move solely to Central District, but we’re here and we’re actually trying to engage in healthy conflict, realizing that other people are watching and perhaps wondering: Can church be a place for me?”

Obviously, these practices do not express some coherent theological view. They are less than either viewpoint would prefer. These practices seek to demonstrate mutual accommodation through concrete gestures of forbearance between conflicting convictions among IMC churches in relation to same-sex marriage.

Neither Central District Conference nor Laura Brenneman’s partner’s congregation seeks to accommodate conflicting convictions in their credentialing. First Mennonite Church of Campaign-Urbana is free to credential Laura themselves. However, if the joint credentialing of IMC churches is sought, there would be an expectation that those churches come to some accommodation among themselves.

Denial of credentials because of a same-sex relationship is not a judgment on a person’s gifts or ministry. Laura is as gifted a sister in the church after her wedding as before.

Following our stated practices regarding Michael Crosby’s and Laura Brenneman’s credentials is IMC’s first experience in these circumstances. We have proceeded with starts and stops. Our congregations will be reviewing our efforts at accommodation and forbearance at our next IMC meetings on Feb. 15 at Camp Menno Haven in Tiskilwa, Illinois.

The article accurately reflects the response from the Central District Conference ministerial committee. We have appreciated the ways First Mennonite Church has conducted faithful discernment and communicated with CDC leadership over the years. Laura is a gifted counselor, chaplain, educator and a committed follower of Christ. We also value our relationship with Illinois Mennonite Conference and appreciate the ongoing ways we collaborate in ministry.