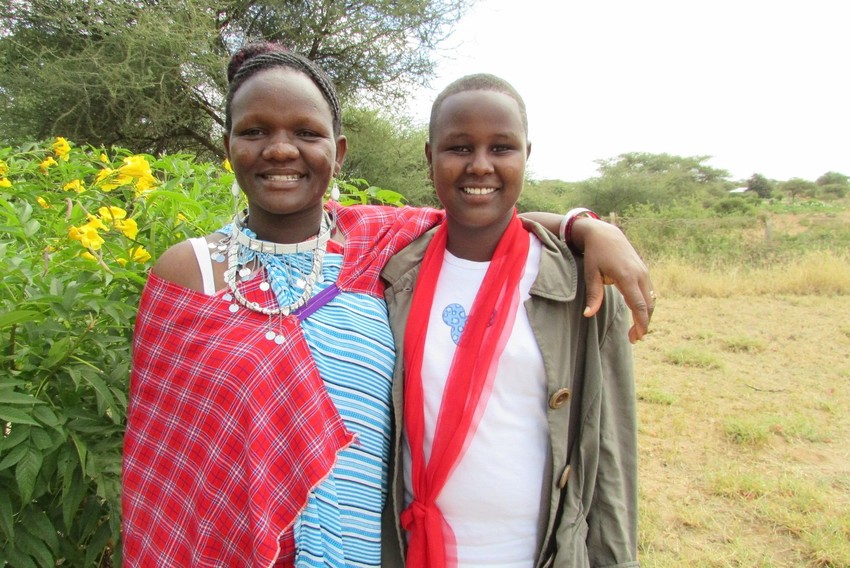 Caption for news release:Ana Laizer, right, who is standing with Paulina Sumayani, director of Tanzania Education and Micro Business Opportunity (TEMBO), participated in TEMBO’s Sara and Juma program at her school. Because of the program, Lazier decided she didnt want to undergo female genital mutilation or to be married at a young age. MCC photo/Tiffanee Wright

Photo: Ana Laizer, right, who is standing with Paulina Sumayani, director of Tanzania Education and Micro Business Opportunity (TEMBO)Trust, participated in TEMBO’s Sara and Juma program at her school. Because of the program, Lazier decided she didn’t want to undergo female genital mutilation or to be married at a young age. MCC photo/Tiffanee Wright

Ana Laizer is a grade nine student in Longido, Tanzania, and dreams of going to university to become a successful businesswoman.

For many girls Laizer’s age, this dream might never become reality.

Access to education isn’t just limited by school fees and uniforms, but also by cultural expectations that girls stop attending school after grade six and instead take part in cultural rituals to prepare them for marriage.

Female genital mutilation (FGM) is a common cultural practice in Tanzania and other countries around the world. Young girls sometimes undergo FGM, a process to remove part or all of a girl’s external genitals. The dangerous procedure can cause serious damage, physically and emotionally, or even death. For those girls who survive, marriage is the next step, and finishing school is out of the question.

MCC partner Tanzania Education and Micro Business Opportunity (TEMBO) Trust teaches grade five students about reproductive health and the harmful effects of FGM through a program called “Sara and Juma.” It also encourages families to keep their daughters in school by providing tutoring camps during the break between grades six and seven.

Paulina Sumayani, the executive director of TEMBO, says it’s a challenging message for some ethnic Maasai communities because they don’t acknowledge that a girl has reached womanhood or adulthood unless she has been circumcised.

“People have been doing it (FGM) for so many years, so it is not easy to tell a person to change that habit and start something else instead. [Change] is a very slow process, but it is happening,” she explains.

TEMBO encourages alternative rites of passage to signify adulthood, including community gatherings, educating the girl about her body and giving gifts to her, just like they would if she would be circumcised.

Sumayani says TEMBO is doing lifesaving and empowering work in Tanzania, but without MCC’s financial support, the staff wouldn’t be able to reach communities in rural Tanzania, where FGM is most common.

“MCC is supporting us to reach places we cannot visit ourselves because our budget doesn’t allow us to do so,” she says.

When Laizer shared what she learned about FGM’s harmful effects with her parents, they supported her choice not to undergo the procedure. Her parents are proud of her academic success, and Laizer’s father has declared that all his daughters will continue their studies.

Sumayani says it’s rare for parents to be so supportive, but she finds hope in the increasing number of instances of young girls saying no to FGM and child marriage.

Laizer says she would like to see change in her community. “I’d like to see everyone get education as I get, and then when I reach my goals, if God helps me, I need to see other people be proud of their goals as I will be.”