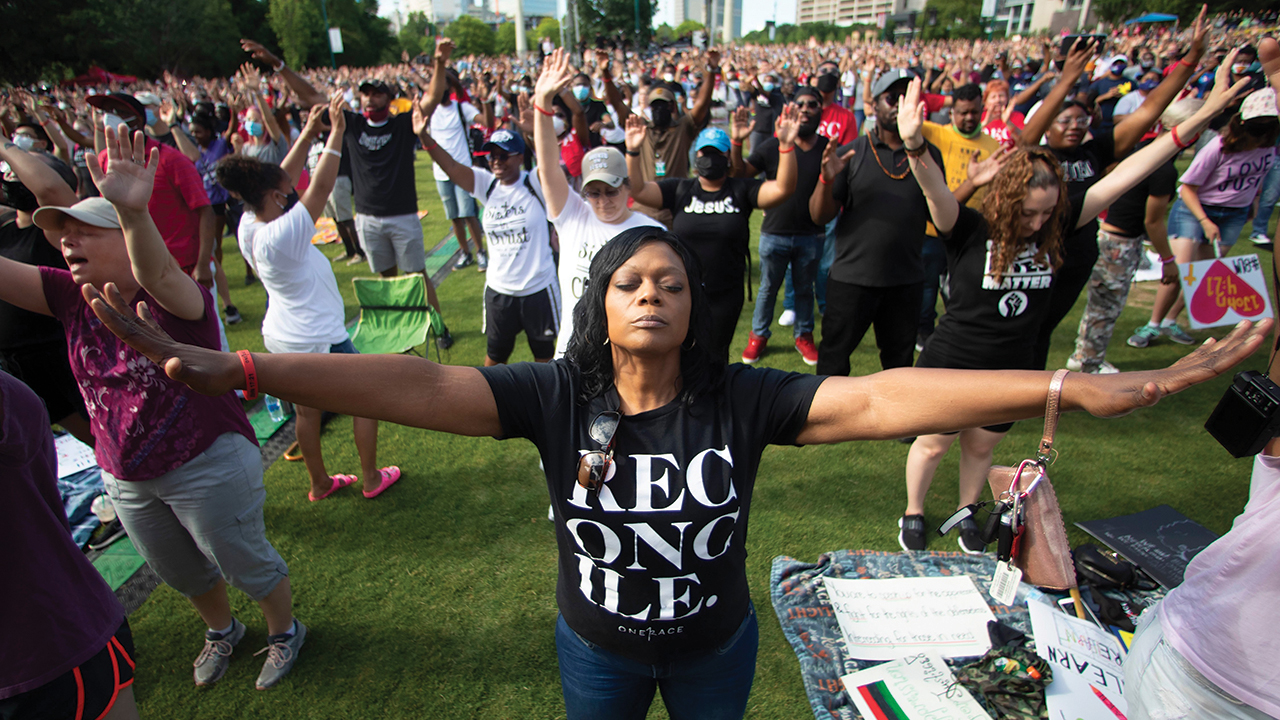 A woman prays during a Juneteenth event hosted by OneRace Movement, a religious organization, at Atlanta’s Centennial Olympic Park on June 19, 2020. — John Bazemore/AP

Union Gen. Gordon Granger arrived in Galveston, Texas, on June 19, 1865, and delivered General Order No. 3: “The people of Texas are informed that, in accordance with a proclamation from the Executive of the United States, all slaves are free.”

This news came two months after Gen. Robert E. Lee’s surrender at Appomattox and more than two and a half years after President Lincoln’s Emancipation Proclamation.

Beyond celebrating, what would recently freed African Americans use their freedom to accomplish? Many started new churches.

The founding of Black churches began as early as 1777 when Andrew Bryan founded the First African Bap­tist Church in Savannah, Ga.

The effort to start new churches took a giant step forward in 1816 with the founding of the first African American Christian denomination, the African Methodist Episcopal Church.

The post-Civil War era opened even wider horizons for Black churches. By 1880 the AME Church had grown to 400,000 members.

The planting of Black churches coincided with a decline of Black membership in predominantly white churches. By 1880, the exodus of African-Americans from white churches was largely complete.

Today, we’re witnessing another wave of African American withdrawal from predominantly white Christian spaces. It began as a quiet exodus leading into the 2016 presidential campaign year. But following the murders of Breonna Taylor, Ahmaud Arbery and George Floyd, the quiet exodus became a #LeaveLoud movement.

Some are using their newly discovered freedom from evangelical strictures to revive church planting in Black and brown neighborhoods.

Too many Christians think of multiethnic churches as an ideal. They don’t see the necessity for independence and erase any sense of unique needs. Genuine solidarity allows the energies and ideas of marginalized communities to take center stage.

According to recent research by Barna and the Racial Justice and Unity Center, 27% of Black Christians report feeling pressure to give up some aspect of their identity to “fit in,” and 33% say it’s difficult to move into leadership in multiethnic churches. Worshiping in multiethnic congregations does not automatically produce solidarity.

Black and brown communities need the freedom to plant gospel-preaching, neighbor-loving, justice-seeking churches responsive to their own contexts, free from the white gaze.

Such an effort need not be a separatist movement. Black Christian history teaches us that it is possible to work on separate fronts while supporting one another in the same cause. As historian Greg Wills observed: “Blacks did not seek to alienate themselves from white Baptists. On the contrary, they considered themselves members of the same denominational family as the white Baptists, despite their separate organizations.”

It takes the entire church to reach the entire world. The Christian church can do more together than we can apart — if by “together” we mean the kind of solidarity that avoids paternalism and trusts people of color to take the lead in their communities.

Thabiti Anyabwile and John Onwuchekwa are two of the founders of Crete Collective, a new church-planting network focused on planting and revitalizing churches in Black and brown communities across the U.S.