Katie Hurst, for The Mennonite 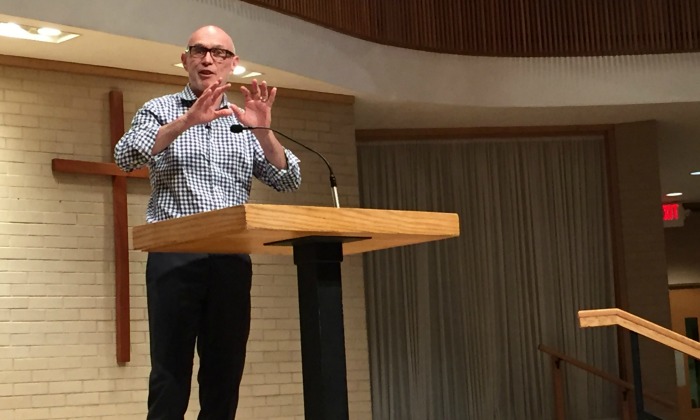 Offering a presentation titled, “Humility and Joy: What We Can Still Learn From Martin Luther,” Miroslav Volf was spoke at the Believers’ Church Conference on Sept. 15. The talk also doubled as part of the Yoder Public Affairs Lecture Series at Goshen (Indiana) College.

Both the conference (the 18th of its kind) and Volf’s talk aimed to “explore the gifts and tensions of the Believers’ Church’s legacy in light of the 500th anniversary of Martin Luther’s launching of the Protestant Reformation.” Volf is the Henry B. Wright Professor of Theology at Yale University Divinity School and Founder and Director of Yale Center for Faith & Culture and has written or edited over 20 books and 90 articles.

Anabaptist Mennonite Biblical Seminary (Elkhart, Indiana) President, Sara Wenger Shenk, introduced Volf as one of the most “celebrated and influential public theologians of our day,” and reminisced briefly about meeting and interacting with him in the former Yugoslavia during the 1970-80s.

“For Miroslav,” she said, “Christian faith is a way of life, and theology is the articulation of that way of life, with huge implications for culture, politics and economics.”

Volf began his lecture by saying it would be a talk, “fundamentally about the nature of self, because I think the ideas of humility are intimately tied to the character of self.”

He described a typical image of Mary Magdalene as representing humility and an image of Miriam as an icon for joy. He explored the ways the dichotomy expressed between the two images has encouraged the separation of these traits in people’s lives.

Volf followed up with an examination of the role that achievement plays in the development of self and explored how an individual’s conceptions of self-ownership and identity can become conflated with achievement.

“Self-achievement of us as owners of ourselves and our actions has to happen in a competitive environment,” said Volf. He discussed how often, due to competition and a culturally-honed need to succeed, individuals tend to feel a sense of inadequacy in comparison with others.

“What troubles us most is not something that troubled [Martin] Luther,” he said. “Our problem is the self-undoing sense of inadequacy in the face of an impossible task.”

Volf drew connections between lack of achievement and lack of joy, saying that “a bounding inadequacy or inability to achieve permeates our consciousness.” He noted that no matter the level of achievement, individuals tend to feel inadequate.

True humility, he offered, began when Luther and others recognized that everything about themselves was a gift. The very act of existence is a gift from God and thus the idea of self-ownership becomes irrelevant. He quoted the apostle Paul saying, “What do you have that you have not received?”

Volf referenced Philippians 2, saying that Christ humbled himself because he was Lord and tied this to Luther’s doctrine of the “humility of being.”

“Humility in action,” he continued, looks like fearlessness and association with the lowly for the purpose of helping them, not for a reward. “They have already achieved themselves,” he began, but corrected himself by saying: “They have already been achieved by God, and therefore they are able to move not in condescension, but rather simply because that’s where help is needed.”

He added that this humility in action is what leads to the reclamation of joy, as the images of humble Mary and joyful Miriam are combined into one.

“The telltale sign of humility is the ability to…rejoice with those who rejoice,” said Volf in conclusion.

The conference ran from Sept. 14-17 on the Goshen College campus. A full conference report will be published later this week.