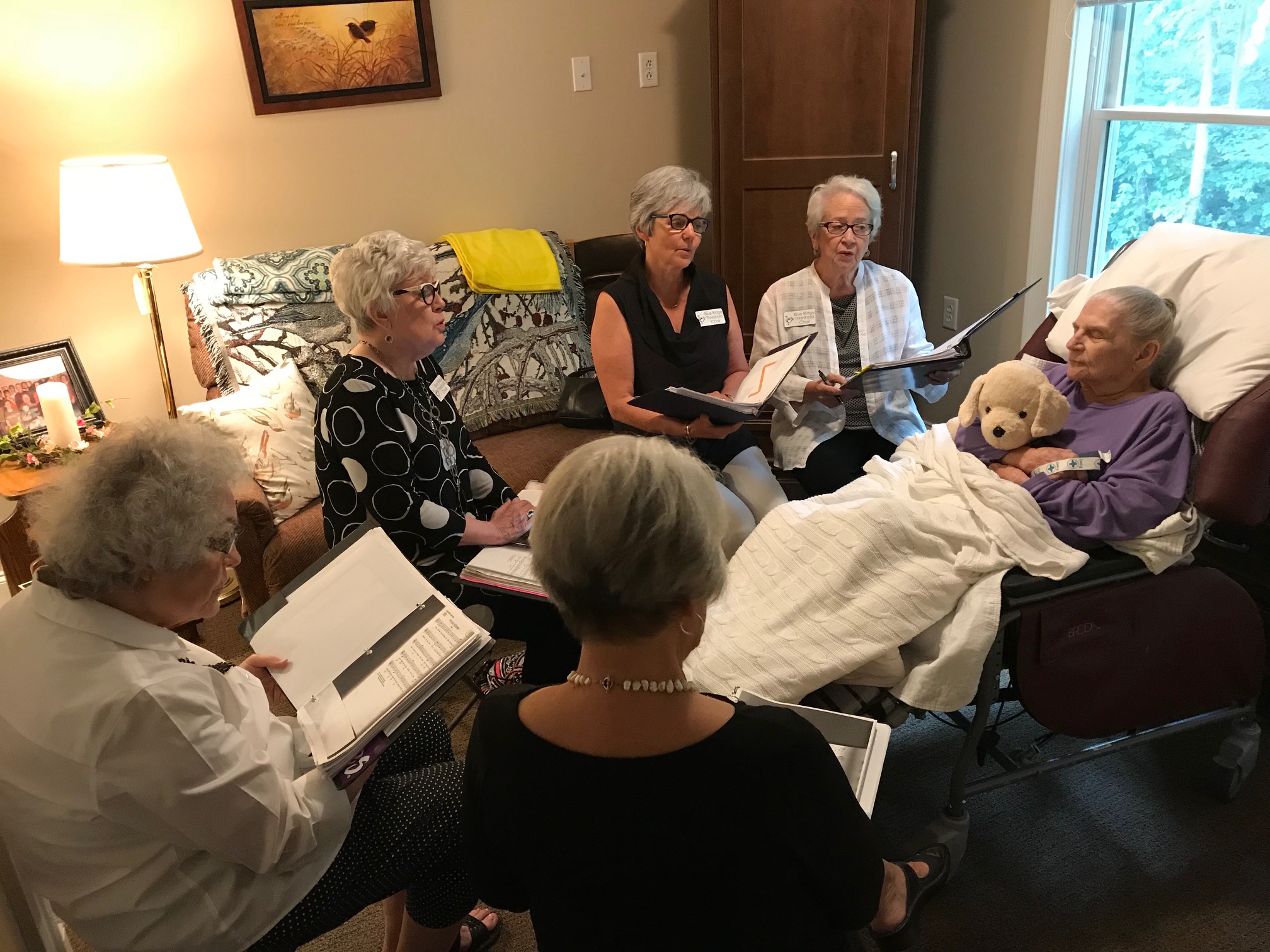 Members of the Blue Ridge Threshold Choir sing for Thelma Good, a resident at the Virginia Mennonite Retirement Center in Harrisonburg, Virginia. (photo by Eric Martin)

When she was 48, Donna Heatwole was going through a tough time and felt anxious. A music lover and musician throughout her life, she decided to plan her funeral, including what songs should be sung, and that calmed her down, she said in a July 19 interview.

About 25 years later, she came across a Facebook feed that mentioned the Threshold Choir, and it felt like a call, she said. She contacted the national organization and was connected with a coach. Heatwole contacted friends in her local singing group in Harrisonburg, Virginia, and the word spread. By January 2017, the Blue Ridge Threshold Choir (BRTC) had formed.

Threshold choirs generally sing to people in hospice or palliative care to calm them and assure them they are loved. “We try to assure people that there is comfort, love and hope,” said Heatwole.

Threshold Choir is an international organization, with more than 150 chapters in Europe and North America, with most of them in the United States. “Kindness made audible” is its motto.

BRTC has 16 members, but when the choir visits someone to sing to them, only a small group goes, so they fit in the space and so it can be intimate, said Heatwole.

They gather around the bed and sit at eye level, she said. Before they visit, they find out what they can about the person. They have a repertoire of songs but also take requests.

Heatwole listed some of the songs they sing: “Walking Each Other Home,” “Quietly,” “In the Quiet,” “Metta Sutta,” “Eternal Light,” “Rest Easy,” “So Many Angels,” “Sweet Sweet Dreams,” plus more familiar hymns, such as “Amazing Grace,” “Precious Lord,” “In the Rested Rock,” “Jesus Loves Me” and “Softly and Tenderly.” They even do some songs in Spanish and Hebrew. She noted that some of the songs she grew up hearing used as invitation hymns also serve well for the choir’s purpose.

Heatwole said being in this choir has changed her life. “It’s a wonderful gift, both for the people we sing to and to us,” she said.

They only go where they’re invited. A local hospital and hospice-care facility know about them and contact them to come sing. And the Virginia Mennonite Retirement Center (VMRC) uses them often, she said.

Eric Martin, chaplain at VMRC, learned about BRTC through his supervisor, Betsy Hay, vice president for wellness and community-based services. She invited the choir to a leadership forum gathering, then in the summer of 2017 suggested using the choir to supplement VMRC’s pastoral-care ministry, especially during end-of-life support for residents and families, he wrote in a July 23 email.

He noted that choir members, usually three to five at a time and not always the same people, come not only for nearing end-of-life situations but for any residents who may be struggling.

Heatwole, who grew up in Berne, Indiana, and attends Park View Mennonite Church in Harrisonburg, said the choir receives requests on an average of once per week, but sometimes it’s more often than that.

Martin wrote that the experience of the choir for residents and their families is “very positive.” He wrote that “they often say (usually with tears of emotion) that they had no idea it would be like this…such beautiful music and comforting.” Some families, he said, have asked the choir to come back later and sing at their loved one’s memorial service.

“They truly do have a ministry of bringing comfort and the peace of God,” Martin wrote.

And Heatwole said she’s already chosen the songs she wants the group to sing to her whenever she may be nearing her death.