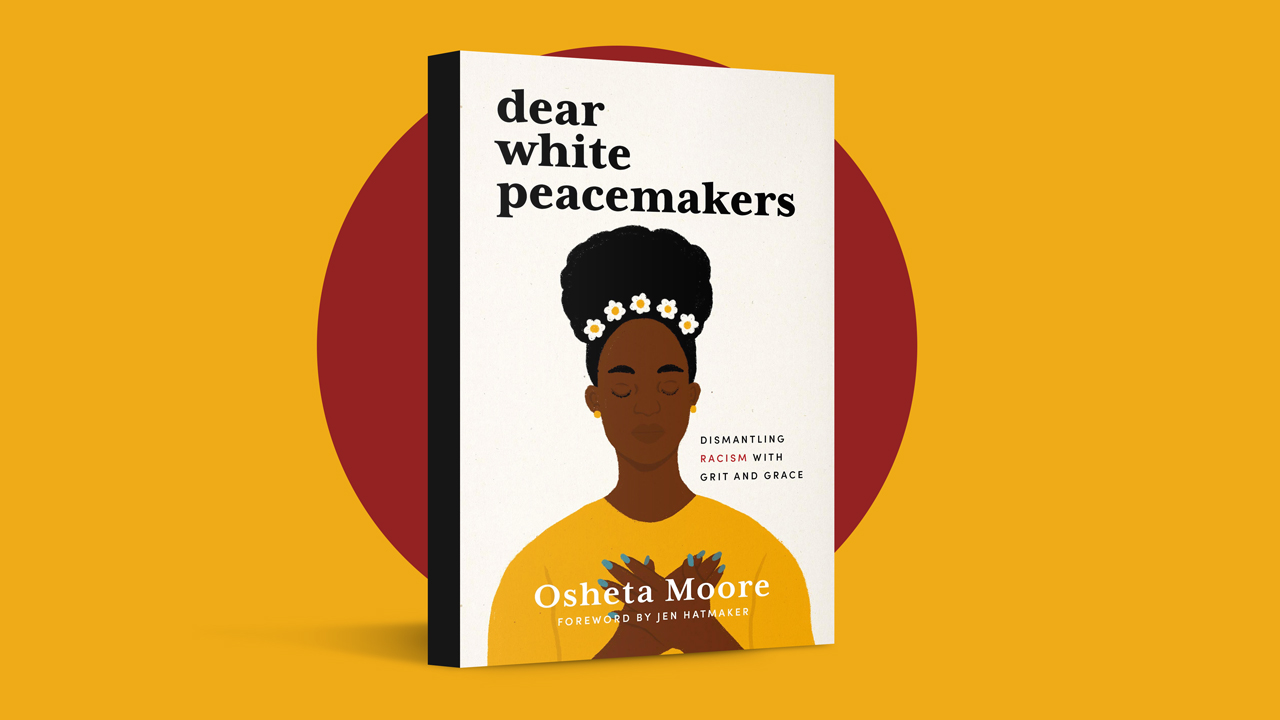 In the span of six weeks this summer, my hometown made national news three times, for all the wrong reasons. A teacher’s aide went to work in blackface to protest a vaccine mandate. High school students were caught “selling” their peers of color in an online slave-trade chat room. The Newberg, Ore., school board voted 4-3 to ban teachers from displaying Black Lives Matter or other flags deemed political in classrooms, setting off a cascade of racist-fueled conflicts, including a protest by the white-supremacist Proud Boys.

As I grieve the state of my community, Osheta Moore’s Dear White Peacemakers serves as an antidote to my sadness, as well as a guide to meeting the school district’s decision-making “with grit and grace.” Moore writes specifically to white peacemakers, like me, whose good intentions can be compromised by our complicity in systems that codify white supremacy and by misdirected rage that can harm the very people of color we desire to help.

Most chapters begin with a letter addressed to white readers and end with a prayer — an opportunity to reflect on the ideas Moore outlines, as well as to experience Jesus’ love for each of us. This love moves through every word of Moore’s book and is foundational to her antiracism work. Peacemaking must start with the premise that we are all loved by God, created in God’s image. We must acknowledge the humanity of others if we are to seek peace-filled community with them.

For this reason, Moore does not call people racist, even if they commit racist acts, but beloved, “because anti­racism is the work of reclaiming this essential part of humanity.”
It is because of our shared humanity that white people need to recognize the ways white supremacy has made them comfortable, at enormous cost to others. Events of the past few years have opened many people’s eyes to the injustices white supremacy perpetuates. These include the deaths of George Floyd, Breonna Taylor and Ahmaud Arbery and the disproportionate costs of COVID-19 on Black and brown communities. Uncoupling from the comforts of white supremacy remains difficult for most white peacemakers, who might recognize that white supremacy erodes their humanity but “are comfortable in that sickness.”

Moore prefers the term white supremacy to white privilege, because being white is not a privilege and because “supremacy” more accurately reflects the idea that “nestled in every aspect of American culture is the preservation of the social construct of whiteness.” Until people are willing to call this exactly what it is — giving white culture, white bodies, white communication and white history the status of “most important” — we cannot begin to dismantle white supremacy, nor will we live in the beloved community to which Jesus calls us.

For too long, Moore argues, Christian antiracism work has centered on grace without reckoning the damage caused by white supremacy and without recognizing the ways white supremacy not only oppresses Black people but also keeps white people from being whole. She says Christians should walk a third way: one that celebrates the humanity in each person while acknowledging (and dismantling) the systemic racism that keeps us all from flourishing.

Moore unflinchingly shares her experiences as a Black woman living in a culture shaped by white supremacy, including the many ways she’s been harmed by well-meaning white people — the “white moderates” whom Martin Luther King Jr. described more than 50 years ago as “more interested in order than justice.”

I appreciate Moore’s vulnerability, her willingness to share her story and her justifiable anger and sadness. The emotional labor of doing so takes its toll on Black bodies, a trauma she addresses. She writes that white people will experience trauma of a different kind if they are committed to peacemaking, because antiracism work is traumatic. Jesus is the healer.
The idea of a third way resides at the heart of Dear White Peacemakers. Moore enjoins readers to dismantle systems of white supremacy while checking the state of their own hearts and celebrating their own belovedness.

As I read her description of ways white people have acted toward her family and the Black community, I found myself saying, “I would never do that.” Recognizing this impulse to deny my complicity in white supremacy is important, and I appreciate Moore’s willingness to meet readers where they are in their antiracist journeys.

I will use Moore’s book as a guide to counter the white supremacy metastasizing in my own backyard.