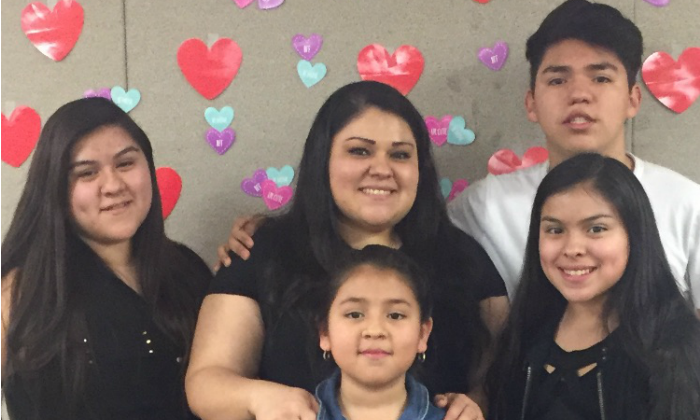 Photo: The Villatoro family in 2017 (from left to right): Etna, Gloria, Aileen, Angela and Anthony. Max, their husband and father, was deported in March 2015 despite nationwide advocacy. Two years later, the family still remains separated. Photo provided by Gloria Villatoro.

In March 2015, Mennonite pastor Max Villatoro was detained by Immigrations and Customs Enforcement and soon after, despite nationwide advocacy on his behalf, he was deported to Honduras. Two years later, his family remains separated and waiting.

Max, his wife, Gloria, and their four children are long-time residents of Iowa City, Iowa, and Villatoro served as pastor of Iglesia Menonita Torre Fuerte in Iowa City, part of Central Plains Mennonite Conference. Gloria works full-time at the University of Iowa Hospitals and Clinics but has Wednesdays and weekends off in order to continue providing leadership to the Torre Fuerte congregation.

Villatoro was living in Ensenada, Mexico, for a period of time, but had to return to Honduras on April 1 for visa reasons and was not allowed to return to Mexico. The Mexican government is tightening its own immigration policies as a result of heightened immigration enforcement happening in the United States.

Being in Mexico allowed Villatoro’s children to visit him twice in the past year. As legal citizens, all four children can visit their father anywhere, but travel is expensive. As a Deferred Action for Childhood Arrivals (DACA) recipient without permanent residency, Gloria cannot leave the country with assurance she will be allowed return.

Gloria has not seen Max since 2015. During the first period of time Max was in Honduras, Gloria traveled there as part of  a mission trip to provide backpacks and other school supplies to a school in Kele-kele, the rural village Villatoro returned to and is currently living.

Through donations from the Torre Fuerte church, as well as the wider Iowa City community, the Villatoro family led efforts to build a basketball court and provide other resources for the school. This is where Max now devotes most of his time and energy now.

Gloria mentions that Max provides encouragement to parents in the community to help their children pursue an education. “We’re very grateful that while he’s there, despite the pain of separation, he’s been able to bring hope to others,” she said in an April 19 phone interview.

However, the pain of separation is always present for the Villatoro family, especially as they wait and face unknowns at the mercy of the U.S. immigration system. Under President Barack Obama, more than 2.5 million people were deported between 2009 and 2015. According to CNN, since January, the number of arrests of undocumented immigrants has risen by one-third, with over 21,000 arrests being made between January 20 to March 31 of this year.

“Our lives are in limbo right now,” Gloria said. “We’re not sure yet what our plan is. We are just waiting on the Lord, that

he’s going to open a door for us.”

Max is living with his sister in the village but does not have work, other than at the school, because job opportunities are

slim. More opportunities would be available in Mexico if he were allowed to return.

The plan was for Max to return to Mexico as soon as possible. “But plans have changed,” Gloria said, “and now we are waiting on an answer from immigration and continuing our lives here in the U.S.”

The Villatoros say they feel the support of not only the Torre Fuerte congregation, but other Central Plains Conference members and leaders as well.

“I have seen God through them, through the people,” Gloria said. “I feel God has shown me his love through people. I believe God is in control and when I feel like I need a word or something I can always call someone from the churc

h or the conference or my mentor and they’re there, no matter what time it is.”

Gloria compares the support of church leaders to a healing balm, “bálsamo in Spanish,” she said. She says God is showing

her love, support and his control through other people.

The outpouring of community support has made the Villatoro family’s situation feel a bit more manageable, she says. The four children are growing up: Anthony, 17, will graduate from Iowa Mennonite School in Kalona this spring. Etna, 15, is a freshman in high school, and Angela, 13, is in seventh grade. Aileen, the youngest, is 9 and in third grade.

David Boshart, executive conference minister for the Central Plains Conference, is still working closely with the Villatoro family and immigration legislators in the U.S. to search for a potential pathway for Max’s return.

“Hopefully we will be able to hear better news soon,” said Gloria. “We need it.”