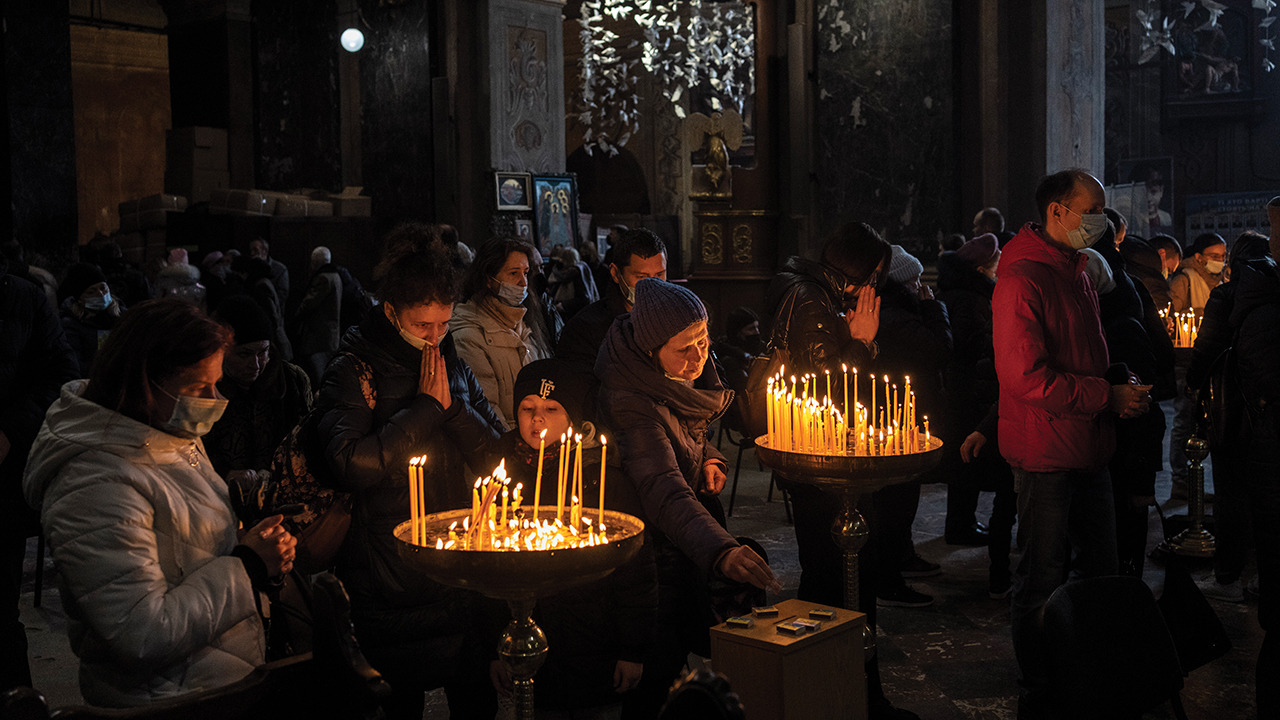 Worshipers pray for peace during a Sunday mass in the Saints Peter and Paul Garrison Church in Lviv, Ukraine, on March 6. — Bernat Armangue/AP

The first casualty of war is truth, U.S. Sen. Hiram Johnson said in 1917. Russian President Vladimir Putin is trying to prove those words accurate, while brave dissidents reject the lies.

Neither censorship nor fear of prison can stop Russians from speaking out against the war. By March 13, about 14,200 protesters had been arrested at antiwar demonstrations across Russia. On March 6, crowds streamed through Moscow and St. Petersburg chanting, “No to war!”

Putin can spill Ukrainian blood, outlaw free speech and claim his troops are fighting Nazis, but he cannot silence an antiwar movement rising from Russians’ shame and anger.

Even within the Russian Orthodox Church, normally compliant with the Kremlin, voices of protest rose. On March 4, more than 285 Russian Orthodox priests and deacons from around the world signed a letter opposing the “fratricidal war” and warning God’s judgment awaits those “who give murderous orders.”

The war has dealt Putin a moral defeat as well as military embarrassment. The world’s condemnation cannot turn back a tank, but it empowers resistance, including nonviolent action.

Mennonite Brethren pastor Maxym Oliferovski of Zaporizhzhia expressed the moral clarity of the Ukrainian resistance. “Join us in prayer that God stops the evil here from spreading,” he told the MB magazine Christian Leader. “Pray that people will be strong and fight for the truth.”

Oliferovski said he wouldn’t condemn those who take up arms in the fight. For his people, the hard questions about pacifism — “what would you do if . . . ?” — are not hypothetical now. This has happened before in Ukrainian Mennonite history. During the civil war that followed the Bolshevik Revolution, Mennonite men organized armed selbstschutz (self-defense) units to defend their villages.

When Oliferovski says “truth is on our side,” he expresses a spiritual principle that Scripture describes with metaphors of protective military garb. In Ephesians 6, Paul identifies the “belt of truth” as one accessory of the “whole armor of God,” our defense against “the spiritual forces of evil in the heavenly places.”

We pray that Ukrainian Mennonite Brethren and other partners of Mennonite Central Committee will be held secure within the armor of God. We should give generously to relief efforts.

Ukrainians draw spiritual power from the knowledge that they wear the belt of truth. The battle against deception runs deep in their history. The Soviet regime suppressed the truth of its cruelty and failure. Historians can only estimate how many Ukrainians (as many as 4 million) perished in the Holodomor — the intentional famine of the early 1930s — because Soviet leader Joseph Stalin did his best to conceal the genocide.

The Russian dissident writer Aleksandr Solzhenitsyn linked the power of truth with a call for nonviolent resistance in a 1974 essay, “Live Not by Lies”:

When violence bursts onto the peaceful human condition, its face flush with self-assurance, it proclaims on its banner, “I am Violence! Make way, I will crush you!” But violence ages swiftly. A few years pass and it is no longer sure of itself. To prop itself up, to appear decent, it will without fail call forth its ally — Lies. For violence has nothing to cover itself with but lies, and lies can only persist through violence.

Lies are a despot’s essential tool and greatest weakness. Solzhenitsyn called for exploiting this frailty ­peacefully. If Russians ­refused to “patch together [Communism’s] decomposing garb,” the fearsome but hollow regime would collapse. He was prophetic.

Fake news still deceives many, but Putin can’t hide the truth as ­easily as the Soviets did. Ukrainian President Volodymyr Zelensky says his weapon is truth. It is a nonviolent force that has prevailed in Ukraine and Russia before, but only after much suffering. Ukrainians’ courage inspires us to keep faith in the power of truth-telling.