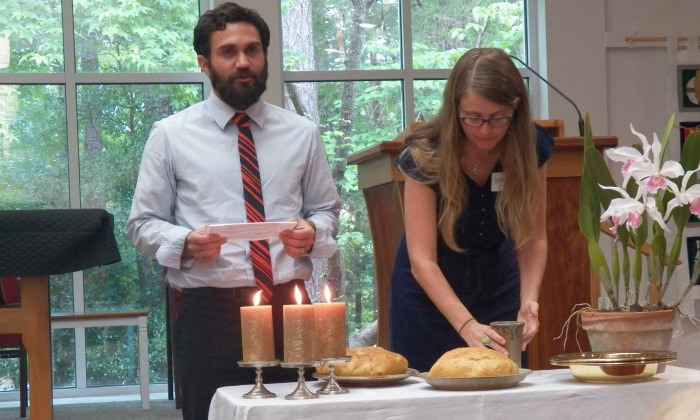 “We stand with Isaac, and we think you should, too.”

These words, sung by a group of children as an added verse in a rendition of “Do Lord, Oh Do Lord, Oh Do Remember Me,” set the tone for a June 5 worship service and celebration at Chapel Hill (N.C.) Mennonite Fellowship. Eleven days after his credentials were suspended for performing a same-sex wedding ceremony, the congregation reaffirmed Isaac Villegas as its pastor and celebrated his 10 years of ministry with the congregation.

The service included a liturgy of thanksgiving and blessing, read by representatives from the congregation as well as Duke Divinity School, the North Carolina Council of Churches and Raleigh Mennonite Church, a neighboring Virginia Mennonite Conference congregation, said, “We gather to give thanks for the presence, gifts and life of our brother and pastor, Isaac, as we celebrate his 10 years of ministry among us. We reaffirm his call to our congregation and his place within this community as our pastor.”

Megan Ramer, pastor of Seattle Mennonite Church, preached a sermon centered on the story of Jesus raising the widow’s son in Luke 7. She described Jesus stepping into a funeral procession and moving “toward suffering,” as an act of compassion, a word that “seems like a noun, but behaves like an active verb.”

Ramer also acknowledged the grief present in the congregation and denomination and celebrated the ways she observes the congregation “embodying Christ’s compassion,” including participation in prison ministry, participation in protests of North Carolina’s House Bill 2, Villegas running in the Palestinian Marathon in Bethlehem to raise money for Mennonite Central Committee work in the Israel-Palestine region, and blessing “the love and covenanting of two women in your congregation.”

Kate Dembinski, one of the two women Villegas married on May 21, shared her gratefulness to the

congregation for allowing Villegas to perform the wedding ceremony. “Both of us have profoundly deep wounds from the church,” she said, “and it has been so restorative to speak with you about what marriage means and to be married by Isaac. Him marrying us was a miracle…and so transformational for our relationship with church and one another.”

After the litany of thanksgiving and blessing, Villegas served the congregation Communion with bread he baked that day. After the service, attendees shared a meal, accompanied by a soundtrack of love songs compiled by Villegas as a thank you and expression of love for congregational members.

In response to the suspension, two CHMF members launched an online social media campaign, We Stand with Isaac. To date, 10 other MC USA congregations across the country have tweeted or instagrammed their support for Villegas.

On May 25, Virginia Mennonite Conference (VMC) leaders confirmed via email that Villegas’s credentials had been suspended, in keeping with a 2013 conference policy. This is the first time the 2013 VMC policy regarding credentialed leaders who perform same-sex covenant ceremonies has been used. Suspension means that all “ministerial privileges” granted by the conference are put on hold, including the ability to serve as a delegate at VMC assemblies. In addition, should Villegas ever hope to pursue employment beyond VMC, MC USA would not be able to process his ministerial leadership information form (MLI), the application that all pastors seeking congregational assignments must complete.  And, according to the MC USA ministerial handbook, A Shared Understanding of Church Leadership, credentials cannot be transferred from conference to conference unless they are in good standing (with a status of active, inactive, or retired).

In a policy developed in April 2015, the FLC reiterated that performing a same-sex wedding ceremony was considered pastoral misconduct and represented a “breach of trust.” The policy cites A Shared Understanding of Church Leadership, which lists a number of “breach of trust situations,” including, among others, use of pornography, intentional dishonesty, acts of violence, and financial irresponsibility. According to the FLC policy, performing a same-sex ceremony relates to criteria concerning “failure to be accountable to the conference that holds the credential,” “major theological deviation from Christian/Anabaptist understandings” and “behaviors that undermine the congregation, another congregation or the relationship with the wider Mennonite church.” According to MC USA staff, the language of misconduct has not been applied to someone for performing a same-sex marriage ceremony before.

On June 2, Patsy Seitz, chair of the Faith and Life Committee, the group responsible for credentialing in VMC, and Rev. Spencer Bradford, district minister for the Eastern Carolina region of VMC, confirmed via e-mail that the conference is following a process outlined in the April FLC statement, which calls for the formation of an accountability group to work on healing the breach of trust. Clyde Kratz, executive conference minister for VMC, was not available for comment.

Harold Miller, pastor of Trissels Mennonite Church in Broadway, Virginia, another VMC congregation, believes there is no easy path to conversation and healing among congregations with differing convictions on same-sex marriage, but hopes that conference-wide Bible study will offer a way forward. In February, Villegas and Miller met together as part of a group exploring biblical understandings “that we feel are central as we relate to brothers and sisters in same-sex partnerships.”

“A strategy of ‘agreeing to disagree’ is not doable when we are dealing with a matter of conscience—because both conservatives and progressives will still continue to feel compelled to break covenant: one by leaving the church, the other by not waiting for the church to change its agreements before violating those agreements,” says Miller. He hopes that across VMC and MC USA, people will focus on the guidelines laid out in the denominational Agreeing and Disagreeing in Love statement, which call people to “seek additional guidance in processes of biblical/communal discernment.”

Miller said that conference leaders “carry high respect and high trust in the eyes of virtually of the pastors,” even in the midst of conflict.

CHMF’s decision to affirm Villegas performing a same-sex wedding ceremony came after a long congregational discernment process and was unanimously affirmed by congregational deacons and members.

According to Sandra Vander Linde, a congregational deacon, the June 5 worship was both a celebration of Villegas’ ministry and a statement to the conference and wider church. “We weren’t looking to be poster children for same-sex unions,” she says, “but at the same time, because VMC has held [its] position, we feel like we are bearing public witness to a kind of faithfulness we believe in very strongly. And we want our conference and the denomination to make room for us, because we believe it’s the gospel.”

Vander Linde notes that the congregation is willing to live with some of the consequences and hopes to still be in relationship with VMC. CHMF is a young congregation, launched in 2003, when a Durham-Chapel Hill area small group from Raleigh Mennonite Church decided to form a church plant.