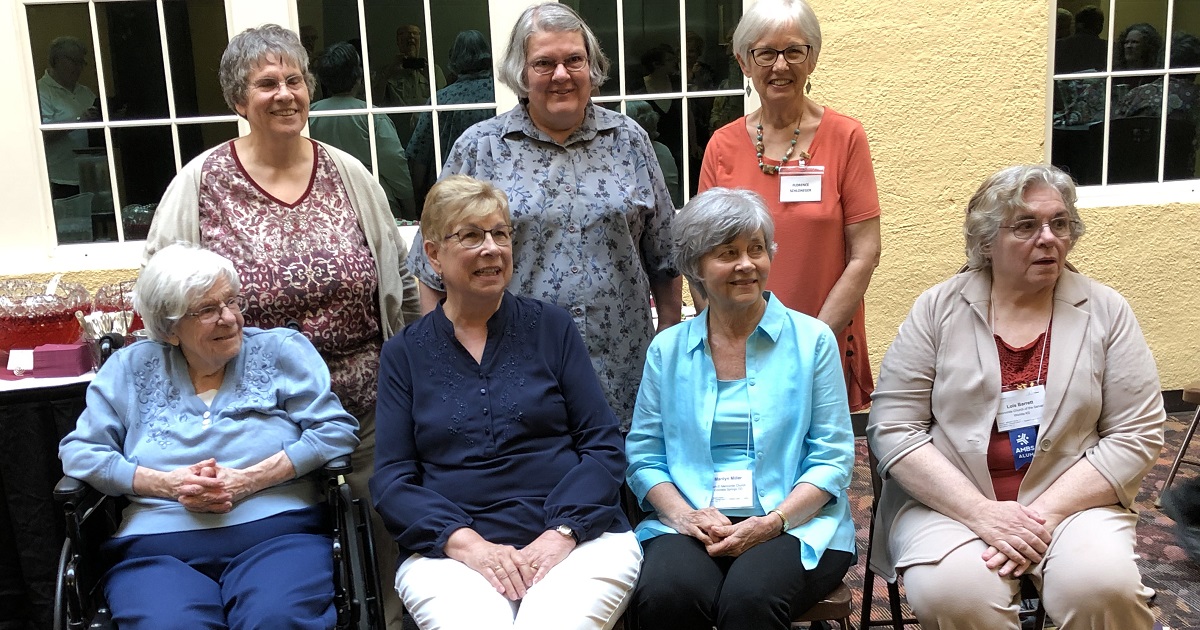 At its annual assembly July 26-27 in North Newton, Kansas, Western District Conference focused on being witnesses, hearing testimonies from congregations and welcoming a congregation into its membership.

Under the theme “We Are Witnesses,” participants in Mennonite Church USA’s largest area conference heard a testimony at the opening worship on July 26 from Sandra Luz Montes-Martinez. She gave thanks for a Mustard Seed grant from the Resource Commission of WDC, which her congregation, Iglesia Menonita Monte Horeb in Dallas, Texas, used for a health initiative on diabetes prevention in the Hispanic community there.

Up to a quarter of Hispanic people in her community have diabetes, Montes-Martinez said. The church’s women’s group reached out to about 25 people and offered screenings for diabetes and educational times to schoolchildren. In this way, she said, “they are bringing God’s message of good news to their community.”

In his sermon, MC USA executive director Glen Guyton shared his story of coming to the Mennonite church after serving in the U.S. Air Force. He said he joined the Air Force as “a way to get out, to get an education.”

Then a woman he was interested in dating took him to Calvary Community Church, an MC USA congregation in Hampton, Virginia. The church didn’t hide its peace stance but was open to people in the military, Guyton said.

Through its pastor, Bishop Leslie Francisco III, Guyton met Titus Peachey, who taught him about Anabaptism and the theology of peace. Guyton called him “a living witness of peace.”

“If Titus had not been open to me,” Guyton said, “if he had worried more about being pure, I would not be who I am today.”

Guyton learned about the courage of early Anabaptists, many of whom died for their beliefs. “We are more than conquerors through him who loved us,” he said, quoting Scripture, “because we’re tied to a power beyond us.”

In order to offer transformation to others, Guyton said, it is important to understand who we are.

On July 27, Moises Romero, pastor Iglesia Camino de Santidad in Liberal, Kansas, spoke about the important people to him in helping plant this congregation. “The church works to make disciples because God has told them to follow the peace of God,” he said. Later in the day, WDC delegates unanimously welcomed the congregation as a new member.

In his second sermon, Guyton said he likes the theme “We are witnesses,” especially “we are.” As our family of faith grows, he said, things get messy, and we need to accept people as they are. We are attracting people who don’t know all the rules, “like which pew belongs to grandma.”

He read from Ephesians 2:13-18 and noted that Christ moves the church beyond a place of rules and regulations to bring us together. “Rules are important,” he said, “but they are there to help serve the church, and when they don’t, we need something new.”

We need to recognize our role as witnesses, he said. We live in a world where people who are seeking asylum are abused. He worries about his son, who is entering a time when he is seven times more likely to be a victim of homicide simply because he is African American. “This is a time ripe for the message of peace.”

What if we moved beyond our fears and dividing labels (MC or GC, e.g.) and realized God is bigger than that, bigger than our problems? Guyton asked.

He cited Martin Luther King Jr., who said that when we don’t worry about suffering, we are hopeful and can make a difference. Part of our message is to be hopeful, Guyton said. We aren’t the first to have to endure pain and hardship.

“The worst thing in the world is an unhappy Christian,” he said. “We should have the joy of Christ, in spite of what we suffer.”

We all have a role to play in equipping disciples.

In her state of the conference report, WDC conference minister Heidi Regier Kreider noted that last December, at the gathering of conference ministers of MC USA and Mennonite Church Canada, she heard that being ambassadors of Christ calls us not to a comfortable place but to a brave place, to be people of courage.

“Let us take courage as congregations,” she said. “Let go of fears about the survival of the church and trust God.”

She went on to offer a litany of calls to “take courage”:

The WDC Executive Committee brought a proposed budget of $608,327. This was higher than the previous year because of added staff and taking into account the future need of repair to the roof of the conference’s office building.

Rosie Epp of Elbing, Kansas, asked, “We didn’t meet budget last year; how will meet a higher budget this year?”

Ray Reimer, moderator, responded that WDC kept expenses low last year, and that has been the case the past few years. Can we be more generous?

Despite the unanswered questions, the budget passed with only two opposed.

The Church Planting Commission reported that discussions are under way with a congregation in Miami, Florida, about possibly joining WDC. Byron Pellecer said that church planting today needs to take a multicultural approach because the people being reached often come from different nations.

The conference offered 17 workshops on a variety of topics, including making reparations, responding to the Israel-Palestine conflict, faith formation, Journey Forward, adaptive leadership, church planting, climate and creation care, and a 40-year review of women in ministry.

Next year’s assembly will be held July 31-Aug. 2 in Denton, Texas.