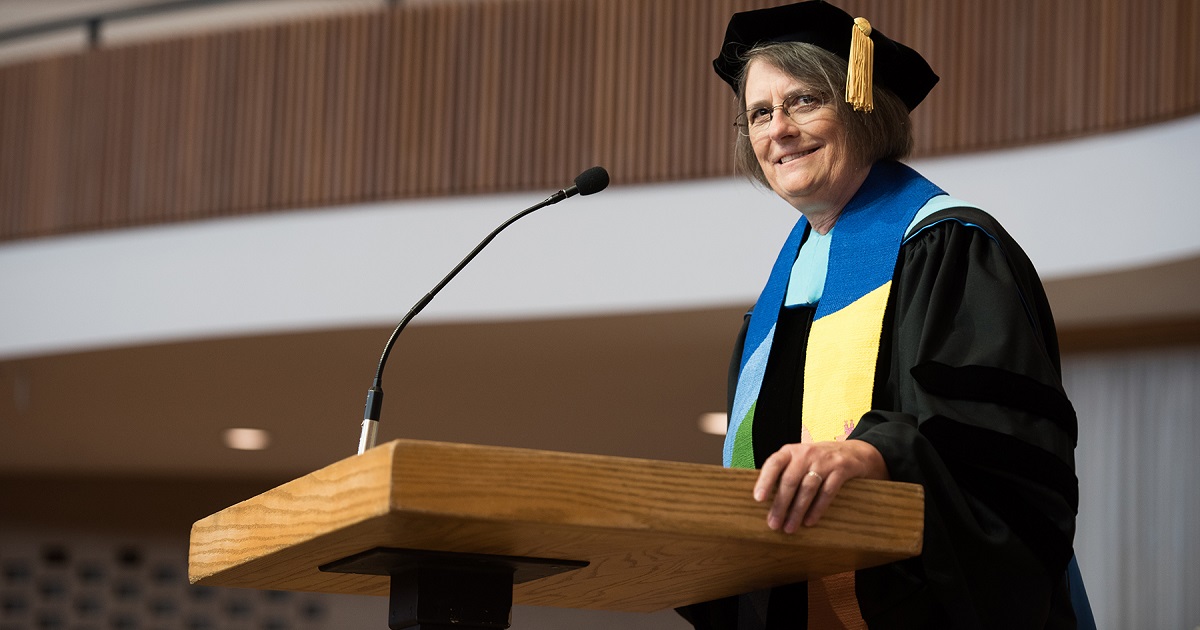 Photo: Sara Wenger Shenk, Ed.D., at her last commencement as AMBS president on May 4, 2019, at College Mennonite Church in Goshen, Indiana. Photo by Jason Bryant.

Since beginning in the fall of 2010, Wenger Shenk oversaw changes such as transitioning the institution’s name from “Associated” to “Anabaptist” in 2012, renovating the Chapel of the Sermon on the Mount in 2011–12 and degree program revisions that included the creation of a distance-friendly Master of Divinity program in 2013. She also led efforts to increase the seminary’s global reach through Global Anabaptist Education initiatives, including connecting with Meserete Kristos College in Ethiopia to offer AMBS’s new fully online Master of Arts: Theology and Global Anabaptism to graduate students based in Ethiopia.

As existing faculty members retired, nine new teaching faculty members and a new vice president and academic dean were hired during Wenger Shenk’s tenure. She initiated strategic focus conversations among the faculty that led to further integration of environmental, immigration and peace issues into the curriculum. She notes that these projects have all been team efforts.

“Sara’s ability to encourage collaboration and enable people to lead and be the best they can be—combined with her willingness to give strong direction when required—empowered AMBS to grow and thrive,” he says. “Her passion for the work and mission of the church encouraged and strengthened those around her.”

Wenger Shenk initiated AMBS joining the Seminary Stewardship Alliance in 2013, which helped pave the way for enhanced faculty and student attention to theological and practical engagement with environmental sustainability, including four Rooted and Grounded Conferences on Land and Christian Discipleship. With her counsel and support, AMBS received several Lilly Endowment, Inc., grants, including $250,000 to reduce economic challenges for seminary graduates, a supplemental three-year grant of $125,000, and a $1 million grant to establish Thriving in Ministry: A Process for Pastoral Leaders. She also worked closely with the Hearts on Fire Capital Campaign, which raised more than $9.6 million in gifts and commitments since 2015, as well as close to $7 million in annual fund gifts.

“Sara has been a beloved leader at AMBS, where her leadership is described as courageous, honest and pastoral,” Lapp says. “She is known for leading from a place of grounded personal integrity, a deep sense of service, and love for God.”

Wenger Shenk positioned AMBS to be transparent in naming and repenting for the seminary’s failure to respond appropriately in the 1970s and ’80s to abuse perpetrated by John Howard Yoder, a former AMBS professor and administrator—which included organizing services of lament, confession and commitment in 2015.

“Sara is part of a wave of women who have become prominent leaders in Mennonite higher education. She made important contributions to the sea change in how we view institutional risk and sustainability,” Berry says. “One example is, of course, the way Sara led AMBS to battle the dragon of John Howard Yoder’s legacy. Sara understood in her mind, her spirit and her gut that for AMBS to have a healthy future as a church institution, her task was to make it possible for the truths of the past to be heard and validated by AMBS’s president in the present. Her integrity has given all of us more options for what it means to be a leader.”

Prior to coming to AMBS, Wenger Shenk served in a variety of roles at Eastern Mennonite University and Seminary, Harrisonburg, Virginia, including seminary associate dean and associate professor and interim seminary dean. She has written and contributed to several books, including Meditations for New Parents (Herald, 1996 and 2014); Anabaptist Ways of Knowing: A Conversation about Tradition-based Critical Education (Cascadia, 2003); and “A Mennonite View of Life and Learning: Practicing the Way of Jesus,” a chapter in Liberal Learning and the Great Christian Traditions (Wipf and Stock, 2015). She continued writing regularly while serving as AMBS president in Practicing Reconciliation, a blog she launched in February 2013 that has consistently been one of the most visited pages on the AMBS website.

Wenger Shenk earned a Bachelor of Arts in English education from Eastern Mennonite College (now University) in 1975; a Master of Theological Studies from Garrett-Evangelical Theological Seminary, Evanston, Illinois, in 1986; and a Doctorate of Education from Union Theological Seminary and Presbyterian School of Christian Education (now Union Presbyterian Seminary), Richmond, Virginia, in 1999. While president of AMBS, she attended Prairie Street Mennonite Church in Elkhart, a congregation of Indiana-Michigan Mennonite Conference of Mennonite Church USA.

Wenger Shenk plans to live near Waynesboro, Virginia, with her husband, Gerald, where they will be closer to family, including grandchildren.