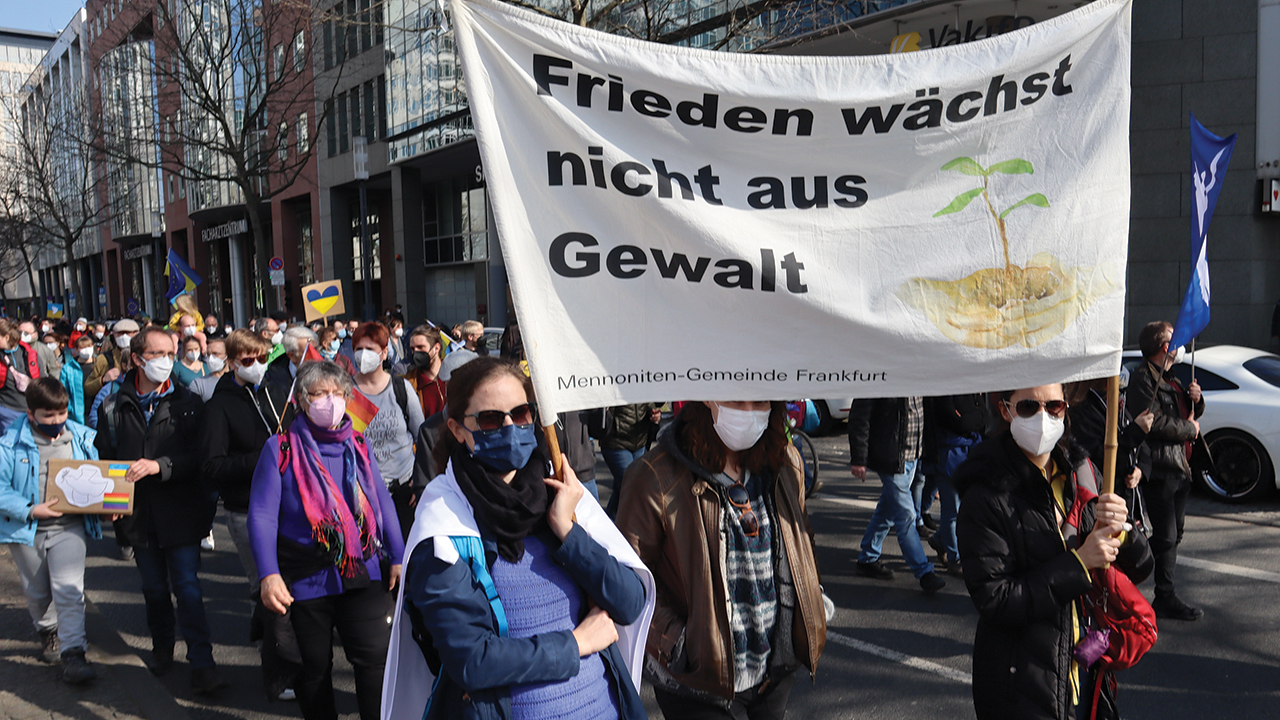 Members of Frankfurt Mennonite Church carry a banner during a peace rally March 13 in Frankfurt, Germany. The banner proclaims, “Peace does not grow from violence.” — Ulrich Leutbecher

“Peace does not grow from violence.” A few days before Russia invaded Ukraine, we discovered a banner with this message in our new position as pastors in Frankfurt, Germany. Originally made for peace marches against the U.S. invasion of Iraq, the banner expresses a seemingly simple and uncontroversial statement. Yet, when we took it to a big peace rally in town, we were stunned to realize the biggest applause was reserved for those who called for military aid to Ukraine and a NATO-backed no-fly zone.

While I support solidarity with the Ukrainian people against Russian aggression, I worry that my country is turning to the old ways of military deterrence without considering alternatives.
I also worry for our Mennonite community: Will our peace convictions stand the test of war at our doorstep? Or will we turn out to be “vegetarians between meals,” as the Catholic antimilitarist Ammon Hennacy called pacifists between wars?

The bitter truth is, Mennonites in Germany have not always been a peace church. In fact, in 1848 a Mennonite delegate to the first constitutional assembly at the Paulskirche in my hometown of Frankfurt argued that Mennonites should not be granted exemption from military service in the future democratic state, since equal rights entail equal responsibilities.

This line of thought became the dominant German Mennonite position. By the time of the World Wars, there were virtually no Mennonite conscientious objectors in Germany. Mennonite pastors regarded objection to military service and war as an antiquated custom. They joined the theological mainstream praying for a speedy German victory.

It took the double trauma of total military defeat and confrontation with the horrors of the Holocaust to break the spell of militarist nationalism. The void was filled by the Pax boys and Mennonite Central Committee workers whose relief work in feeding and housing thousands was a concrete example of the power of a peace conviction coupled with action.

The new peace theology crafted by the Concern group contributed to a theological denazification. This theology told a new story, in which the church exists as a nonviolent witness to a world at war, an experimental plot in which alternative ways of engaging conflict could be tried out and others invited into.

This story fit the mood of a nation weary of war and a world in which a militarized Germany was not welcome. While it was never uncontroversial to be a total pacifist or a conscientious objector to all wars, at times the burden of proof seemed to lie with the hawks.

The wars in the Balkans in the 1990s led some to argue that “Never again Auschwitz” and “Never again War” were in tension. But doing reconciliation work and opposing bombings was still seen as a force for good, albeit a naïve one.

The U.S. invasions of Afghanistan and Iraq were hugely unpopular in Germany, so the work of Mennonites in helping GIs exercise their right to conscientious objection was lauded by many. And while the German weapons industry always contradicted the facade of our pacifist national self-­image, the shock of Putin’s invasion has caused a seismic shift back to the mantra of peace through strength.

How resilient will our peace witness be in the face of this new militarization? Will we evangelize for creative nonviolent strategies, or will we return to being the quiet in the land? Will we build on the 100 years of witness built up through MCC and its German sibling organizations? How do we recover the inner freedom to nonconform boldly and make alliances for peacebuilding?

I was heartened that the leaders of the Associated Mennonite Churches in Germany not only drafted a statement condemning the Russian invasion and calling for nonviolent approaches but also joined a broad coalition of secular and church groups denouncing increased military spending as a robbery of the poor and calling for investment in a transition away from fossil fuels.

In a world on fire with armed conflicts and the climate crisis, we need to scale up our efforts to heal the wounds of those caught under the wheels of militarism and fossil-­fueled economies. Our mission is nothing less than to nonviolently throw a wrench into the wheel of death itself.

Benjamin Isaak-Krauss co-pastors Frankfurt Mennonite Church with his spouse, Rianna. He graduated from Anabaptist Mennonite Biblical Seminary in 2019 and serves on the steering committee of Community Peacemaker Teams. 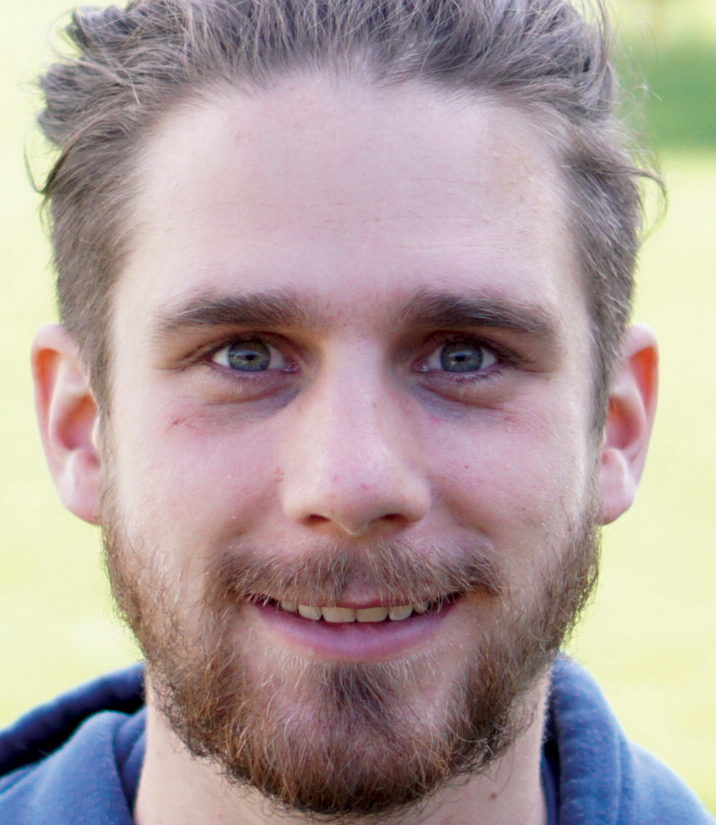