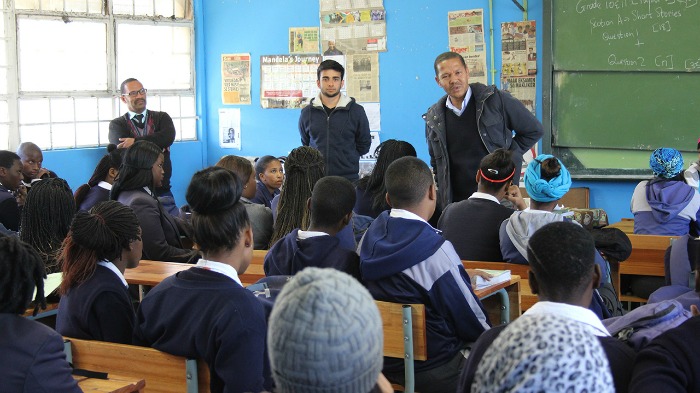 In some South African towns, students dodge bullets on their way to class. They brave the danger because they so desperately want an education, Mikhail Fernandes said. This summer, as a Mennonite Mission Network intern, Fernandes taught peace education and life skills at Silverstream School in Manenberg, a township outside of Cape Town, South Africa.

Since childhood, Fernandes dreamed of following in the footsteps of Nelson Mandela and Desmond Tutu, who both played a significant role in South African history. So it was a dream come true when Fernandes was offered an internship opportunity with Southern African Development and Reconstruction Agency (SADRA) through collaboration between Mission Network and Goshen (Ind.) College’s Summer Service Inquiry program.

Fernandes, a Renaissance man with gifts ranging from Western classical music to sustainable development to conflict intervention, embraces each moment of life with enthusiasm. In his teaching at Silverstream, he blended all these diverse passions. He could identify with the students’ desire to learn because of his growing-up years in a similar situation.

“I was once in their spot,” Fernandes said. “I wanted to show them they could be a success story, too.”

Although his roots are in Goa, India, Fernandes received most of his primary school education in Nepal during the Maoist revolution. He remembers gunfire in the streets as he walked to and from school, and a bomb planted in the church he attended.

As a child, Fernandes traveled with his parents throughout India to serve others. The desire to “give back to the community” was one of the values that guided their lives. His parents, committed Catholics, worked with several organizations. They met Mother Teresa in 1969, and continued to follow her example of ministering to people afflicted by leprosy and poverty. They also spent several years with a team of doctors and nurses delivering free medical aid to communities in southern India. Sometimes, the family traveled up to 10 hours a day to deliver medicine to remote areas.

Absorbing the life philosophy of his parents and his great “struggle heroes,” who made sacrifices working for justice, Fernandes resonated with SADRA’s mission to equip a new generation of leaders to re-build the societies of southern Africa that are devastated by apartheid. Currently, active in six nations, SADRA hopes to eventually offer nonviolence and peaceful methods of resolving conflict throughout the continent.

In these areas, called townships, there are few social services. This discrimination and inequality results in high rates of unemployment and widespread discontent. It is in the townships that foreigners are most resented and have been brutalized in recent outbreaks of xenophobia, as newcomers are seen to be competing for jobs and limited resources.

“SADRA works to mitigate the potential for violent conflicts in these communities, by training community leaders to be able to intervene appropriately before conflicts get out of hand,” Siwali said.

“Oscar is a wonderful pastor who is making a huge, huge impact on southern Africa,” Fernandes said. “This [opportunity] was a capstone on my senior year. It also put my interdisciplinary skills to the test because I’m studying music, communication and sustainability [which] helped me intervene in conflict situations through different perspectives.”

Fernandes was often able to pass as a South African citizen as people of Indian descent have played a significant role in the country’s history. He learned a few Afrikaans phrases from his host father, which added further credibility to his insider persona.

“South Africa was a life-changing experience,” Fernandes said. “The initiative was from God.’

Fernandes was attending a high school in southern India when his commitment to serving others caught the eye of Goshen College recruiters. He loves Western classical music and taught himself to play every low brass orchestral instrument through books and watching YouTube videos. He now performs with the college symphony.

After coming to Goshen, he taught himself music production and has built a small music studio in his apartment with money from his on-campus job. His goal is to use his musical talent for social change. Although Fernandes sees music as his “strongest asset,” the change he hopes to implement is multi-dimensional. He has also studied for a semester at Merry Lea (the college’s environmental learning center), helped with the native grasses restoration project on campus, and worked with state representatives on sustainable policies and practices.

“I didn’t know anything about Mennonites before coming [to Goshen], but, now, I have the highest respect for them. They believed in me and sponsored me during rough financial patches. I am deeply grateful for their support,” Fernandes said.

After graduation next spring, Fernandes plans to continue “giving back to his [global] community.”