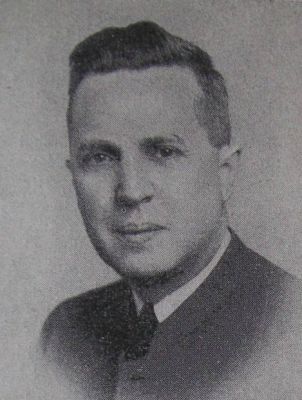 A new biography shines fresh light on Orie O. Miller, a 1915 Goshen (Ind.) College graduate, former professor and a founder of Mennonite Central Committee. He was also instrumental in setting up the Civilian Public Service program with the U.S. government during World War II.

Miller not only helped form organizations, but shaped the identity of Mennonites throughout the 20th century. As Robert S. Kreider, former president of Bluffton University, said, “Orie Miller may be the most remarkable Mennonite in our generation, perhaps of our century.”

Here are some things you probably didn’t know about Orie O. Miller.

1. “Orie” got his uncommon name (Ora Otis) from the names of the two sons of a local Mennonite bishop, Daniel J. Johns, whom his father admired.

2. He was the oldest of 11 children; he and his four brothers all had double initials like their father, D.D.

3. An Elkhart County native, Orie first visited the GC campus when it was still a wheat field.

4. Orie’s first date with his future wife, Elta Wolf, occurred somewhat by chance. As a student at GC, he chose to be paired with whichever of the two women came down the stairs of Kulp Hall last before a double date.

5. He once complained that the GC students who remained on campus one summer were “such a dead bunch,” because they didn’t take much initiative in organizing social activities.

6. He became head of the Goshen College School of Business the fall after he graduated from there, while beginning work toward a degree in English at the same time.

7. Although GC’s Miller Residence Hall is named for him, it is not because he gave the money to build it. (His generosity did help finance and construct several other campus buildings, though.)

8. Miller and Clayton Kratz, the students for whom Miller and Kratz Residence Halls are named, travelled together to Russia in 1920 to investigate relief possibilities among Russian Mennonites who were starving because of the war and famine. Kratz was arrested and accused of being a spy, and likely died in a Russian prison camp.

9. Thanks to Miller’s business acumen, he helped keep both Goshen College and Hesston College in operation during the Great Depression in the 1930s.

10. Miller traveled widely and frequently, and often came through Goshen on his way home to Pennsylvania. Whenever he was in town, college and community folks gathered at the college to hear him talk about his latest travels.

11. He was chief executive for both Mennonite Central Committee and Eastern Mennonite Missions simultaneously for 25 years, without drawing a salary from either one. He also served on more than 60 church boards, commissions and committees in his lifetime (never more than 25 at a time, though).

12. Like many men in the Mennonite Church at the time, Miller wore a plain coat. But as a businessman, he also wore a necktie under his plain coat.

15. Miller graduated from GC School of Business three months to the day after the Oreo cookie was trademarked.

Joe Springer is the curator of the Mennonite Historical Library, My Calling to Fulfill: The Orie O. Miller Story is available for $29.99 from MennoMedia at www.mennomedia.org, or in the Goshen College Bookstore. For more on Orie O. Miller, visit Sharp’s blog on the biography project: oriomiller.blogspot.com.