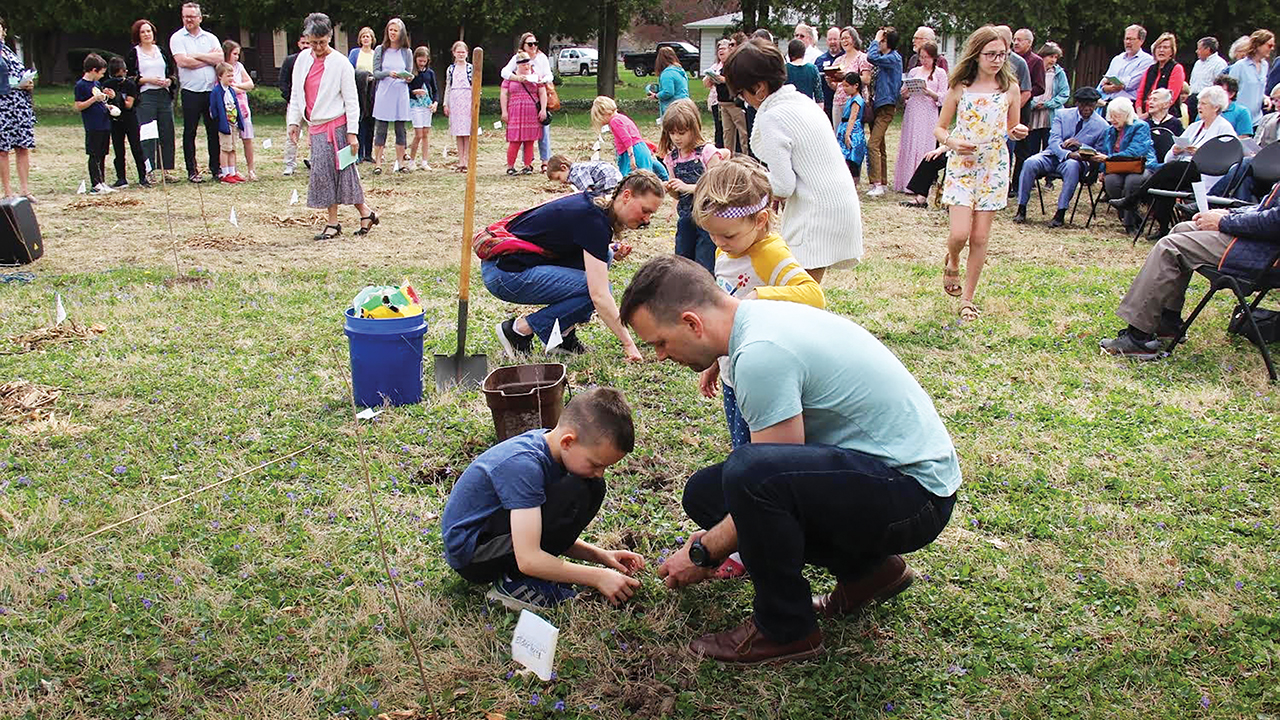 On Good Friday, congregants and friends of ­Berkey Avenue Mennonite Fellowship in Go­shen, Ind., began planting trees on an acre of land behind the church building. Bare-root seedlings, not more than 2 years old, were placed in the soil. Each vulnerable tree touched a person as it went into the ground. By the end of the Easter weekend, 700 trees, representing 17 species, were in the earth.

This bit of ground was part of a three-acre plot the church purchased in 2007. Some of it was used to create a large community garden. Another portion was seeded to wildflowers. The back acre was left to be mowed.

The land is surrounded on two sides by residential development and on a third by farmland.

At one time, this land must have been farmed, too, along with the rest of the neighborhood. And before that, it would have held forest, wetland and forested wetland.

And now an acre is being returned to trees.

James Yoder, who attends the church, saw an opportunity. While the garden and wildflowers represented certain aspects of church life and church values, something was missing. A committee to develop a memorial garden plan on the south end of the three-acre space was already in place. But how could the entire space be used as an outdoor sanctuary, consistent with the congregation’s mission of being a welcoming place to its neighbors?

In 2020, with the onset of the coronavirus pandemic, Berkey Avenue moved worship services outdoors. They felt fortunate to have green space to do this. By August 2021, the congregation decided to create a long-term plan for the entire three acres. They envisioned a memorial garden, outdoor worship space, community garden, wildflower meadow, prayer labyrinth and woods.

By the spring of 2022, funds were raised and the Berkey Outdoor Sanctuary Committee formed, led by Ruth Miller Roth, Bryan Heinz and James Yoder, to carry out the plan. Yoder’s role was to give leadership to the woods.

Site preparation for the memorial garden and outdoor worship space began this summer. The columbarium was scheduled to be delivered in mid-August. By late fall they hope to have everything completed, including connecting paths, plantings and a pergola marking the entrance into the sanctuary space.

The vision for planting the back acre to trees — reforesting a small portion of land — was a way to act out long-term care and hope. The trees will communicate something about who is welcome. Yoder imagined people in the surrounding neighborhoods would be drawn to the emerging forest as a place to walk and relax or play and explore — a sanctuary from everyday routines.

The woods will take on a broader sanctuary-life as animals are drawn to it. These nonhuman brothers and sisters will find their way back to the land some of their ancestors once inhabited. This ground will become a meeting place for a fuller chorus of the creation, reflecting a more diverse, truer aspect of the Creator.

Yoder began attending online seminars to learn about reforestation and scaled-up planting. He consulted with Steve Thomas, director of the Mennonite Men JoinTrees campaign, and Ben Wilson, a district forester, about tree species appropriate for northern Indiana and the space available at the church. He talked with members of the congregation to gauge and engage interest. With a charismatic smile, ­Yoder helped others to see the rightness of giving some land over to a wooded sanctuary. The vision caught.

The JoinTrees tree-planting campaign committed funding and expertise. The City of Goshen’s goal to double the tree canopy by 2045 became part of the motivation. The growing awareness of the important role trees play in land stewardship helped the congregation pull together the pieces.

A planting plan was developed and mapped. Trees were ordered from the Indiana Department of Natural Resources State Nursery. A planting date was selected, and the word was spread. The ground was prepared, and a spot for each tree was marked with a flag identifying the species.

The Sunday before planting, Yoder encouraged fellow attenders to consider planting a tree as a symbol of hope and resurrection.

On Good Friday, lots of people showed up with shovels and hand augers. There were demonstrations of proper planting: correct depth, making sure roots are respected. Crews were organized, family groups were instructed, and trees were planted.

By the time I arrived shortly after noon, Yoder needed to slow things down to make sure there were enough trees for the youth group to plant the following day. Indeed, by Easter, a small forest was planted.

Any planting requires faith. It takes work and maintenance. But, as anyone who has planted a garden knows, there is only so much a person can do. The actual growing is up to the intricacies of germination, nutrition, photosynthesis, cell division, molecular biology — things that merge toward mystery, where control is relinquished.

When a church plants trees — or anything — it is a signal of living faith. It is demonstrating a release of control (fertilizer, irrigation, mowing) and acting on trust that the Earth is capable of beauty, growth and grandeur well beyond human design.

When a church surrounds itself with trees, it is giving time and space to something much larger than itself in an act of faith that God’s good Earth is exactly that — God’s and good.

Trees are an expression of a tithe, or even jubilee — the idea that land should return to its original owner or state. When trees are present, we put aside ideas of practical use, optimal efficiency, maximum productivity. We content ourselves with a slow unfurling of bounty, which can test our faith and strengthen our trust.

Deepened trust is good for all of us.

Aaron Kingsley is director of the City of Goshen’s Department of Environmental Resilience and the city forester. He lives in Goshen with his wife and three children. This article is expanded from an article first published in The Goshen News. 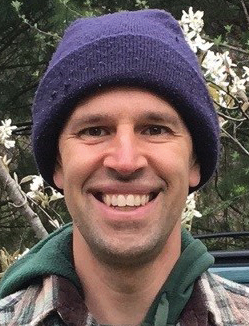