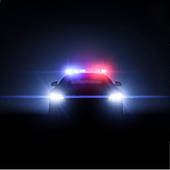 And all of this anger and outrage is bubbling over into a contemporary debate over what racism is and is not in America today.

As an affluent white woman it is clear something is missing. Who am I to speak into this?

I am the child of a habitual criminal.

Throughout my childhood it was not uncommon to have a Sheriff’s deputy pull into our drive way, walk up to the house and arrest my dad.

On multiple occasions our family car would be pulled over, police officers would ask my dad to step out of the car and then we four small children would sit there in complete embarrassment, while my mom cried in the driver’s seat as people drove by seeing my dad being cuffed and walked to the police car.

But even after a childhood, being told by our dad to be on the “look out” for cops, I have no fear of them. I trust them. I teach my children to trust them and I don’t think I would second guess their testimony.

So what’s missing? Why is my reaction to a childhood interacting with police different than black America’s reaction to “justified” police use of force on criminals?

Perhaps it is this: I never once saw a police officer pull a gun on my dad.

Even though he was constantly in trouble with the law. Even though he resisted arrest and led police through a multiple county police chase, ending only after he totaled a police car and ran on foot. He was never beaten, although he may have deserved it.

When police officers came to our home, they were always respectful to us and our mother. I think they worked hard not to scare us children.

Why was my father never injured by the white police officers arresting a man known for resisting arrest, could the difference be that he is a white man?

My father’s criminal acts were equal to that of Michael Brown’s and Eric Garner’s.

True, Michael Brown and Eric Garner may not be completely innocent victims, but I do believe America needs to start asking questions. Why do I not fear the police or distrust them while so many black American’s assume the police officer is lying?

White Americans, even us C.K.’s cannot easily be profiled. You cannot look at me and say, “She must be a convict’s kid, better watch her.”

I do not walk into a store and immediately get followed by an employee to make sure I do not steal anything.

I am not regularly pulled over for going “left of center” like so many of my black friends.

I can confidently walk through a nice neighborhood in the dark and not expect that a neighborhood watch person is going to pull a gun on me.

Why is that? Please somebody tell me.