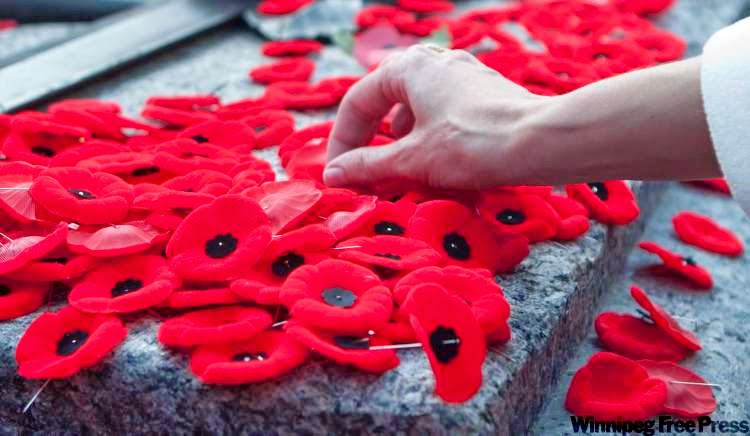 The answer is yes — I’m a pacifist, and I wear one. A few others I know do, too. But many people who oppose war have ambivalent feelings about poppies. I think they’re afraid wearing one will suggest they are, tacitly or otherwise, supporting war and militarism. 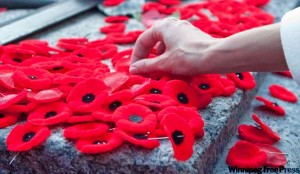 Some compromise by wearing red buttons that say “To remember is to work for peace.” Every year the Mennonite Central Committee distributes thousands of them. It’s a good message. If you aren’t comfortable wearing a poppy, that’s a good message to wear.

But I think a poppy can say the same thing; personally, I’ve never met a veteran who thinks war is a good idea.

As a veteran said to me, explaining his service in the Second World War: “Someone had to stop Hitler.”

I also wear a poppy for personal reasons. I wear it for my Uncle Harry, who was wounded in France in the Second World War. Each Remembrance Day, he would march with other veterans to the cenotaph in my home town, pausing to remember the dead.

Later, he’d go the Legion and drink and reminisce and cry with his buddies, remembering the friends who never made it home.

Uncle Harry, like most veterans, never talked about the war, even though I pestered him as a child. He’d just shake his head and change the subject.

I also wear the poppy for my father. Due to a medical condition, he was rejected for military service in 1944. This bothered him his whole life, especially since so many of his high school friends went overseas. Some of them were killed.

After he died, I went though his belongings. Among his prized possessions I found his “certificate for rejection for general service.” Why did he keep it all those years? I think it was his way of proving, to himself, at least, that he was no shirker — it was his special way of keeping faith with friends who served and died.

I wear a poppy for all the young men who fought and died in war — many of them teenagers.

Author and veteran Paul Fussell was in his early 20s when he fought in the Second World War. He was one of the oldest in his company.

In his book, The Children’s Crusade, he wrote: “At this distance, it may not be easy to remember that the European ground war in the west was largely fought by boys 17, 18 and 19 years old. Some of these men-children shaved but many did not need to. Not a few soldiers hopeful of food packages from home specified Animal Crackers, which, one soldier said, ‘can do wonders for low morale.’ ”

I wear a poppy for conscientious objectors — for those who bravely decided to follow their deeply held principles by choosing not participate in the military during this country’s wars.

During the Second World War, 10,782 Canadians chose to do alternative service — serving on farms, in hospitals, planting trees, building roads and other things. Over 3,000 were from Manitoba — more than any other province. By choosing a different path, they showed there are ways to serve your country other than fighting.

I wear a poppy for all who suffered in war. The widespread wearing of a poppy was popularized by a French woman in the 1920s; she sold handmade poppies to raise money for children affected by the Great War.

In Great Britain, the first poppies for the public were made by disabled veterans, as a way to provide them with work. It was designed to be assembled by someone with just one hand.

I wear a poppy because I am a pacifist. Over my career in international relief and development, much of my work has been in response to hunger and suffering caused by war — people uprooted by conflict, in need of food, shelter and safety.

According to Project Ploughshares, a Canadian peace organization, an average of one person a minute is killed directly or indirectly through armed violence. In the Democratic Republic of Congo, 5 million people have lost their lives due to war.

The World Food Organization says over the past 20 years, the proportion of food crises that can be attributed to human causes has more than doubled from 15 percent to over 35 percent — with most of these emergencies triggered by war.

In the developing world, conflict has displaced millions of people from their homes, leading to some of the world’s worst hunger emergencies.

The effects of war on hunger are also felt long after fighting ends. Fields are often unusable due to mines and unexploded ordnance; people either abandon their farms or risk their lives to grow food.

Finally, I wear a poppy to show that pacifists can be patriotic, too. By wearing one I can show respect to those who served in the military but also show you don’t need to put on a uniform to serve your country.

People can also serve by volunteering, by supporting charities that help needy people here and around the world and by promoting a vision of peace for everyone, everywhere.

That’s why I wear a poppy. Why do you wear one?

John Longhurst, of Winnipeg, Man., is director of resources and public engagement at Canadian Foodgrains Bank. This first appeared on his blog, onfaithcanada.blogspot.ca.