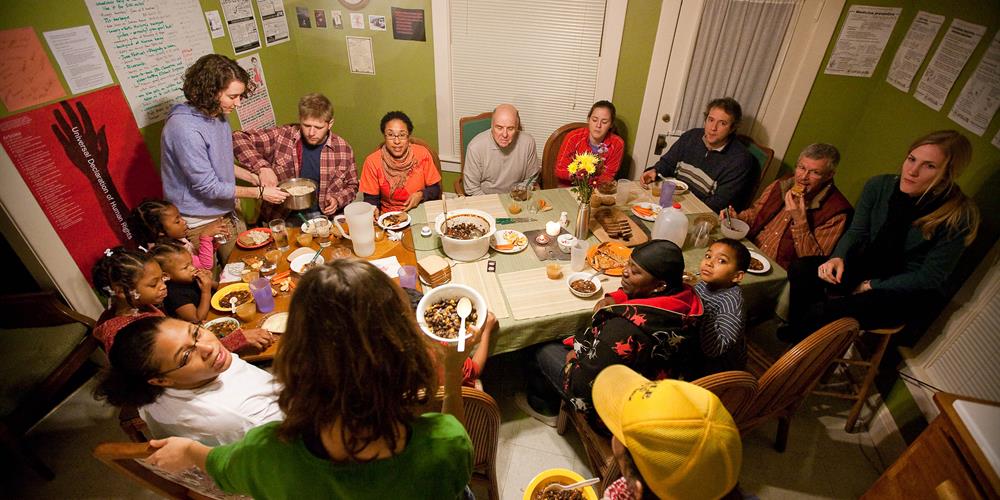 When Gilberto Perez was 12, he hung out with the older guys who came from their Brownsville, Texas, Mennonite Voluntary Service (MVS) unit to help his parents, Elizabeth and Gilberto, build a Hispanic Mennonite church in Robstown. When he was 19, he said those memories emerged as a powerful symbol of what he could do with his own life if he was willing to take the risk.

“That memory was buried for a long time, but it emerged again when I was making a decision about whether to take a break after my first year of music studies at Hesston (Kansas) College,” Perez said. “Because I had enjoyed relationships with those guys who stayed in our home and ate meals with us, I decided to try it for myself when I was uncertain about my future.”

Perez volunteered for MVS in 1988-1990 in the lab of a health clinic in San Antonio, Texas.

“My exposure to people who needed health, food and treatment tapped me into the values of my parents, who helped a lot of people when I was a child,” he said. “MVS led to my own purpose, passion and calling.”

As a result, Perez changed his major from music to social work and served as a social worker before becoming a social work professor at Goshen (Indiana) College, where he is now dean of students.

Perez’s story is one of many infused with similar themes regarding participation in MVS, a service program of Mennonite Mission Network.

Celebrating its 75th year in operation, MVS began in 1944. Today, the program invites young adults into communal living, engagement with a local congregation and work in the community.

Lizzy Diaz, MVS program director, said that for the past seven decades, MVS has solidified life direction and purpose for many participants, including herself. After graduating in sociology at Goshen College, she worked there for a year as a multicultural admissions counselor. She then pursued MVS, in which she volunteered in the advocacy office of World Vision in New York City in 2014.

“I had always dreamed of working at the United Nations one day, and I got the opportunity as I had to attend some sessions there for my volunteer role,” she said. After her term, she worked as a social worker in Harlem for a year before assuming the post as MVS program director.

Throughout its operation, staff and participants have experienced many shifts in society, in how MVS operates and the church’s attitude toward it, Diaz said. For example, when the U.S. Selective Service draft ran from 1940 to the mid-1970s, MVS participant numbers were high. Another busy period occurred during the 2008 recession when jobs were hard to find.

Today, high student debt and competition for graduate schools have caused a decrease in participation, Diaz said. “Graduates feel more pressure to pay down their student loans and get good jobs,” she said.

In each era, MVS strives to fit the current milieu, said Del Hershberger, director of Christian service at Mennonite Mission Network. For example, requests for shorter terms of service is requiring MVS to adjust. “Today, many possible applicants consider a two-year term almost an eternity,” he said. “We are getting more and more requests for six-month or other kinds of flexible arrangements.”

However, the “on-the-job” training in MVS is a plus in today’s competitive job market, he said.

“Many of our partners can’t afford to pay someone a competitive entry-level salary of $60,000,” he said. “But they are willing to take a chance on someone who has aptitude without experience.”

MVS participants sometimes stay on post-term to work as an employee. One example is Ryan Iafigliola. In 2007-2008, he served with MVS at The Fuller Center for Housing in Americus, Georgia. He served as special assistant to the late Millard Fuller, founder of Habitat for Humanity and of the Fuller Center.

Ten years later, Iafigliola is still there, serving as director of the Fuller Center’s international programs, and engaging deeply with Americus Mennonite Fellowship. He was asked to step into his new role in 2009 when Fuller suddenly died.

Iafigliola, a former Lutheran at the Catholic-based University of Notre Dame in Indiana, said he unwittingly stumbled upon MVS. Because he participated in a chapter of Habitat at Notre Dame, he had engaged with Fuller and sought to volunteer at Fuller Center. But he did not know how to make it possible.

“Then one day at a nonprofit career and service fair on campus, I ran across MVS and saw a reference to Americus in its brochure,” he said. “I shared my story with the recruiter, who connected me with the application process.”

Finding its way for the future

Iafigliola and Diaz, a former Catholic, are examples of how MVS candidates come from many faith denominations. In a similar vein, Perez believes greater openness to recruiting people from racial-ethnic backgrounds is important for MVS in an ever more multicultural church.

“The church is changing in terms of its makeup, and there is an increase of congregations of color,” Perez said. “Is the program predominantly for White, Germanic, Swiss Mennonites, or is it also for third-generation Mexican Americans and other ethnicities? How is MVS creating a strategic direction to tap into all the wonderful resources of young adults in cities such as New York and Miami? How is it saying to all its young people, ‘We love you, and we want you?’”

“MVS has always had volunteers with a heart for caring in a broken world, and a lot of our placements throughout the years have involved partners who serve marginalized people,” Diaz said. “We do not want to serve with a savior complex, but rather learn from communities in which we are immersed.”