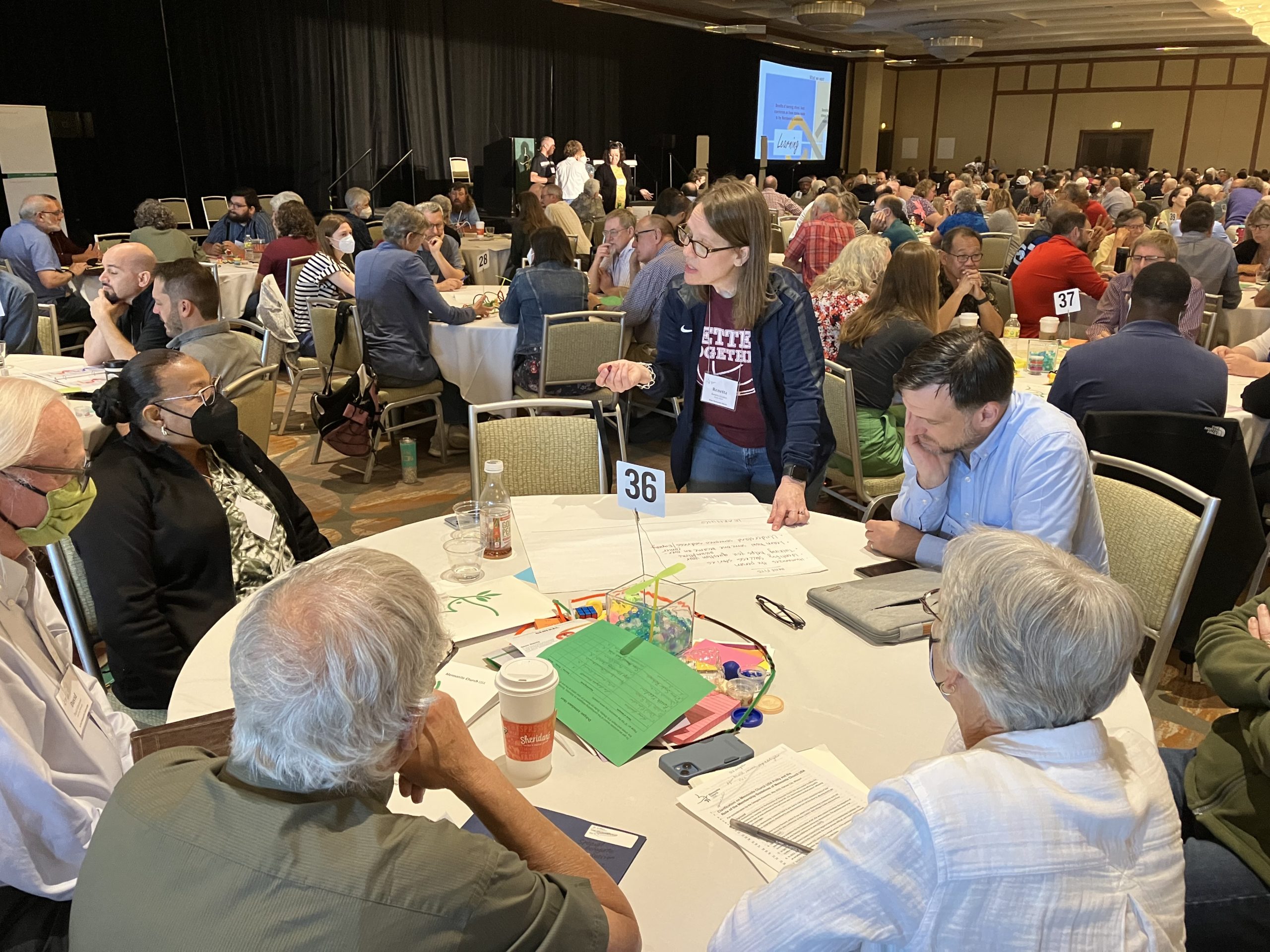 At a special assembly in Kansas City, Mo., on May 28, Mennonite Church USA delegates voted 357-135, or 72.6% in favor, to process an LGBTQ-affirming “Repentance and Transformation” resolution.

Their decision means a vote on the resolution will be added to Sunday’s agenda.

The guidelines — adopted in 2001 as part of a denominational merger — prohibit pastors from officiating same-sex marriages. But the majority of MC USA’s area conferences do not enforce the rule.

The first resolution, brought by the denomination’s Executive Board, would only repeal the guidelines.

The “Repentance and Transformation” resolution, written by the Inclusive Mennonite Pastors group, would not only repeal the guidelines but also confess harm, affirm the spiritual gifts of LGBTQ people and commit to inclusive actions.

During about 45 minutes of discussion Saturday afternoon, several delegates encouraged processing the resolution because LGBTQ inclusion is a vital issue the church must not avoid and because the church needs to model peaceful conversation on a difficult topic.

“As Mennonites, we talk about peace all the time, but often we push the hard conversations under the rug,” said Elinor Kosek of Madison Mennonite Church in Wisconsin. “We need to show people that even when we disagree, we can coexist peacefully. If we are going to practice what we preach, we need to have this conversation.”

Joseph Lee of Chapel Hill Mennonite Church in North Carolina said: “This issue is not going anywhere. Someday we are going to have to have this conversation. We can do it now and build on it, or we can kick the can down the road until the problems are worse and more harm is done to our communities.”

Paula Stoltzfus of Parkview Mennonite Church in Harrisonburg, Va., said discussing the resolution would be “an opportunity to lean into the difficult conversations” and “flex our communal discernment muscles.”

Reasons for opposing a vote on the resolution included a lack of consensus on LGBTQ issues.

Rhoda Yoder of Jackson, Miss., said she didn’t hear “enough agreement that we can make this a church resolution statement.”

Jerry Wenger of Neffsville Mennonite Church in Lancaster, Pa., said he was against the resolution being on the agenda because it “violates the integrity of the resolution process. . . . The resolutions committee should have done their due diligence before passing it on.”

Kurt Horst of South Central Mennonite Conference said more hard work was needed before bringing the resolution forward. He said the guidelines might be rescinded “because we don’t follow them anymore,” but “we are not going to rescind the forbearance resolution, we are going to violate it.” He said the forbearance resolution, approved by delegates in 2015, gives conferences the ability to move forward with progressive actions “while others hold the conservative side.”

Andrew Fairfield of Christiansburg Mennonite Fellowship in Virginia said he was unsure how to vote because, although he is “aggressively progressive,” he wanted to bring as many conservative congregations along as possible, and passing the resolution might cause losses.

Two Hispanic delegates expressed reservations about the resolution because it confesses guilt they do not feel.

“Even though I believe we should talk about it, I don’t feel a responsibility to say I’m sorry when I didn’t do anything,” said David Maldonado of College Mennonite Church in Goshen, Ind.

The session also included discussion in table groups on the Membership Guidelines, particularly what delegates have learned from others’ experiences related to the guidelines.

The special delegate session began Friday night with worship. It concludes Monday morning with discussion of a resolution on “Justice in the U.S. Criminal Legal System” and action on a resolution on accessibility for people with disabilities.