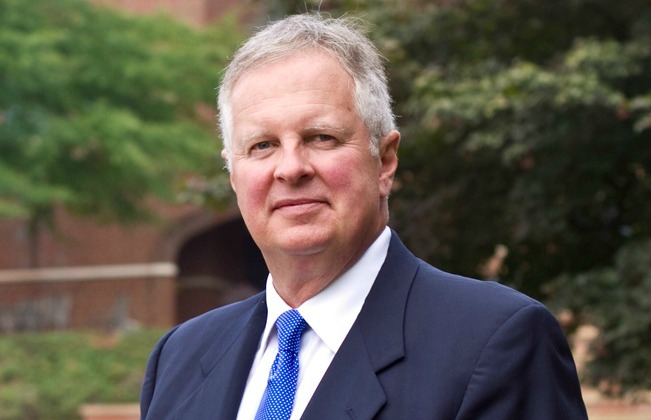 Loren E. Swartzendruber, president of Eastern Mennonite University (EMU), Harrisonburg, Va., announced to the university community today that he plans to retire next year, on June 30, 2016, marking 13 years of leadership as the university’s eighth president and 33 years in Mennonite higher education roles.

“I am immensely grateful for the opportunity to have served the cause of Christian higher education for more than three decades,” he said. “There is never a perfect time to leave this role, but I am confident that EMU and its wonderful team of faculty and staff is well-positioned to thrive in the coming years under the leadership of a new president.”

To the EMU community, Swartzendruber offered his own personal thanks: “No president stands alone. Everything that has been accomplished during my years here was built on the foundation of those who preceded me, and those accomplishments are equally the result of strong teamwork and support from so many contributors.”

Swartzendruber also noted the contributions of his wife, Pat, who had retired from a 35-year career in health and social services before his appointment to the presidency.

“She has been an integral part of our work in representing the institution,” he said. “With five grandchildren arriving in the past six years, it’s time for us to be more available to them.”

Prior to Thursday’s public announcement, Swartzendruber advised the EMU board of trustees at its fall meeting of his planned retirement.

“Under President Swartzendruber’s leadership, EMU has grown in enrollment and has expanded its reach in its mission to educate leaders throughout the world,” said Andrew Dula ‘91, chair of the board of trustees. “We are deeply grateful for his strong commitment to our mission and values amidst an increasingly challenging higher education environment.”

Dula said a national search for the university’s next president will begin in June, when the search committee is formalized.

Board member Evon Bergey ’79, vice president of public sector operations at Magellan Health Services in Newtown, Pennsylvania, leads the search committee comprised of EMU board members and faculty, representatives of the Mennonite Education Agency, members-at-large and one student.

Guiding EMU through growth and opportunity
In the context of nationwide challenges to institutions of higher education, Swartzendruber has guided the university, which includes a site in Lancaster, Pennsylvania, and Eastern Mennonite Seminary, toward growth and new opportunities.

During his tenure, Swartzendruber’s support has contributed to the strengthening of core programs, including the cross-cultural study requirement; science, technology, engineering and mathematics (STEM) studies with a focus on sustainability; the Center for Justice and Peacebuilding and its affiliated programs; and the seminary’s strong relationship with the United Methodist Church.

Additionally, the Center for Interfaith Engagement was founded in 2009 to engage in collaborative multi-faith relationship-building.

Swartzendruber also established and appointed members to the Crisis Management Preparedness Team in 2006 in response to worldwide concerns about a potential H1N1 pandemic. The team’s work was refined by realities following the Bluffton (Ohio) University baseball team bus accident and the mass shooting at Virginia Tech.

More than $65 million dollars has been raised for annual operations as well as capital projects and endowment.

In keeping with EMU’s sustainability initiative, the first phase of a two-phase solar power project was completed in a unique business partnership, contributing to significant cost-savings and sustainability targets.

Additionally, older campus buildings have been renovated and repurposed: Elmwood and Maplewood residence halls, both LEED-certified; the addition of theaters, art gallery, coffeehouse and a media lab in the former gym of the University Commons building; and the Roselawn office spaces, consolidating department offices previously scattered around campus and accommodating the expanding Intensive English Program. More than $8 million has been raised in a $10.3 million campaign to renovate the Suter Science Center, with the laboratory portion of the project on track for completion by July.

• “Flipping the switch” at a 2010 dedication ceremony for the new campus solar array on the Hartzler Library roof, at the time the largest commercial solar project in the state;

Recognized as a leader
Swartzendruber said his years at EMU have affirmed a personal belief in education’s role in the continued call to faith. “I believe more than ever that the Anabaptist witness is needed in our fragmented world, and that we are called as followers of Jesus to offer our gifts in peacemaking and to build a more compassionate and sustainable world.”

His unique background and empathetic personality, says Shirley Showalter ‘70, president emeritus of Goshen College, helped him develop a “gracious form of leadership that will leave a lasting mark on EMU.”

Showalter continues: “He knows that selecting and supporting a great team of other leaders, both administrators and faculty, is key to a successful presidency. He understands the needs of every constituent group—staff, faculty, board, community, alumni and church, and he never forgets that students are the reason for the mission. His humor stands out as his most endearing trait, but he will also be remembered for his courage, his willingness to change and grow, and his commitment to faith in action. Loren’s pastoral heart and keen mind have blessed thousands, and those blessings will yield dividends in the years ahead.”

Carlos Romero, Mennonite Education Agency executive director, also noted Swartzendruber’s legacy to the church and its educational mission: “His commitment to high academic standards is accompanied by a deep commitment, interest, care and love for those whom he has been called to serve. Dr. Swartzendruber is a compassionate leader, a tireless worker and an inspiring advocate of Mennonite education. He is in touch with those he serves as leader and is in turn led by God in all his efforts.”

Swartzendruber’s leadership has been widely recognized among his peers at Council for Independent Colleges in Virginia (CICV), which represents 28 accredited nonprofit independent colleges and universities in Virginia.

“Loren Swartzendruber has been an active, knowledgeable and highly respected member of our organization,” said CICV president Robert Lambeth. “One mark of that respect was his nomination and election as board chairman by fellow college presidents. Loren served in that capacity with esteem and devotion, and has always been a staunch supporter of and advocate for our various projects and initiatives.”

Jonathan Alger, president of James Madison University – a large public university in Harrisonburg, Va.— notes that Swartzendruber “personally fostered relationships and projects on many levels and in many different contexts with JMU.” The two developed a personal friendship that dates from Alger’s arrival at JMU in 2012.

“I have learned a great deal from Loren and from his tremendous knowledge of higher education, his keen perspective on the local and national landscape, his strong commitment to the community and public service, his humility and graciousness, and his delightful sense of humor.”

A Life of Commitment
Swartzendruber’s life has been characterized by “his deep love and commitment to the church and its educational mission,” says Romero. “He is known as a compassionate leader, a tireless worker and an inspiring advocate of Mennonite education.”

After graduating from EMU, he was associate director of admissions and part-time associate campus pastor. He was ordained in 1975, and served as lead pastor of Salford (Pennsylvania) Mennonite Church from 1978-83.

Swartzendruber was appointed associate executive secretary of the former Mennonite Board of Education in Elkhart, Ind., from 1983-93. He then served for 10 years as president of Hesston (Kan.) College.

He is actively involved, on behalf of EMU, with CICV and the Virginia College Fund.

Swartzendruber currently serves on the 14-member board of the Council of Christian Colleges and Universities, a higher education association of 181 intentionally Christ-centered institutions around the world. He also serves on the board of directors of the Evangelical Environmental Network and of the Southern Association of Colleges and Schools Commission on Colleges.