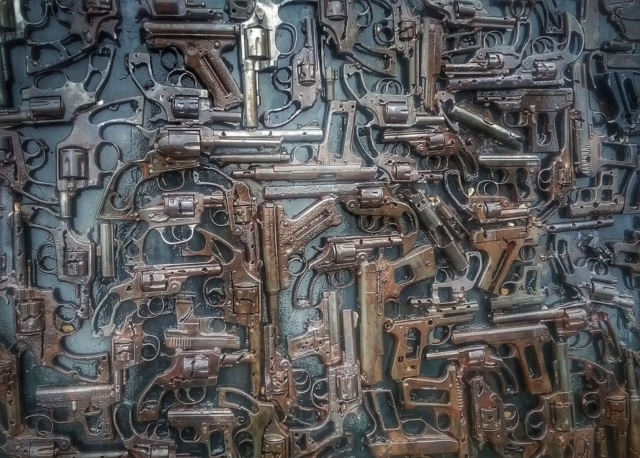 Closeup of “Guns into plowshares” sculpture by Esther and Michael Augsburger. Photo by Leann Augsburger

So much bad news, so little humor; so many groans, so few chuckles. But now and then, deep laughter. Like the ongoing story of male leaders silencing a woman in a book about silencing women is comedy not a wise remedy.

My Franciscan student explained his vows of poverty, chastity and obedience. “I would add, as a Mennonite, no gun,” I replied. Explain that to the Supreme Court. When we surprised a burglar in our home, and he ran (thankfully for us). We found he took nothing, but was going through dressers and night stands. “He was searching for your guns,” the Claremont police said. “Seeking a handgun in a Mennonite minister’s home is like looking for ham at the Rabbi’s” I replied. California is abuzz with our state leaders seeking “wiggle room” in the SCOTUS decisions to limit some, ban others, and thus reduce the wild profusion of weapons. There are as many firearms in the US as there are people. Let’s support wiggle room for life.

2. Ban and burn to make it immortal.

We are still having conversations about the news (AW July 2) that The Mennonite Brethren Executive Boards of US and Canada banned three pages from a book on women in ministry, On Holy Ground, in the chapter by our friend Mary Anne Isaak and subsequently burned the books already printed and recalled those sent out to authors. To make sure that the three pages will become known, quoted, and common knowledge, ban and burn, As the author pointedly notes, in a book on how women have been silenced, a woman is silenced. The verboten pages reportedly note that the marginalization of women in the denomination for generations is parallel to what is happening to members of the LGBTQ community today. Who could deny that she is telling the truth? Both groups silenced because of narrow interpretations of biblical texts seen through, some say,  “patriarchal or fundamental lenses,” both excluded from conversation and roles of service and leadership. To promote, ban; to create an icon of truth, burn.

In line at Trader Joes behind an old friend, we see her requesting brown paper grocery bagging. She looks up to see our cart and pile of cloth bags and apologizes, “So sorry, I forgot my bags,”  In the car we burst out laughing, It used to be that people were ashamed of buying beer (My older brother used to carry recipes for beer bread to give out when he bought a couple cans to bake). Or shame about a bottle of burgundy, (it’s for beouf bourguinon) and now the shame is about things that destroy the planet, We think this is a sign of progress, or maybe maturing?

We learned this new title for the glib or pious answers that are used to relieve cognitive dissonance, and end discussion. Phrases like “it is all for the good, God is in control, someday it will all make sense and so on, and on, ad finitum. My physical therapist remarked after my fall, “It all happens for a reason,” and I replied, “No, that is not true, I fell because I was careless. Those words are a shut down or an escape.”  “I guess you are right and I learned something today.”

“I hear your denomination voted for inclusion of LGBTQ people, are you comfortable with that?” The query came from an ex-Mennonite and now breakaway Conservative Presbyterian psychologist friend, “Comfortable? No, celebrating it, been for it since my first research on the gay experience of Mennonites back in 1978.”  My response was a conversation stopper, so I came back to the question a bit later after he fled to another.  Turned out he was fishing. How do we say people matter to someone who has spent a lifetime of living that truth with this exception? Besides, it is rarely wise to make decisions on the basis of comfort, but on uncomfortable conviction.