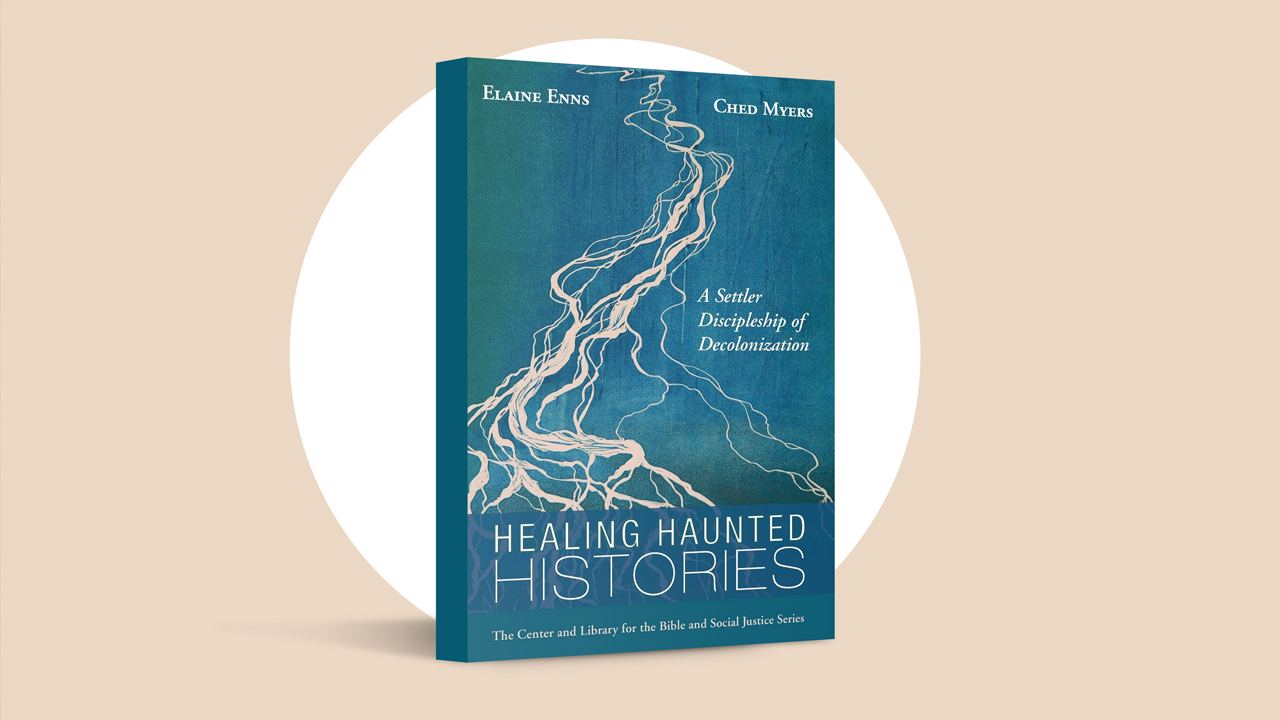 In the introduction of Healing Haunted Histories, Elaine Enns shares a horrible and unforgettable story. She describes walking home with a friend from her eighth-grade graduation in 1980 and seeing an Indigenous girl in the bushes. She knew the girl had been adopted by a white family. The girl was “on the ground on hands and knees,” and the adoptive brother was raping her. “I remember the vacant look in her eyes as she stared straight ahead,” Enns writes.

She remembers that she and her friend walked away in the opposite direction, not fully understanding what they saw, but also silenced by their ignorance of their racist culture.

“Witnessing this violation added to my sense of haunting,” she writes in the book, which she co-authored with Ched Myers. Haunting is a compelling concept threading throughout the book —one that will stay with me.

The United States is permanently haunted by slavery, genocide, violence, colonization. These ghosts rear up when they’re walked away from, pushed down or avoided.

The book includes contributions from Indigenous artists, writers and academics. The intended audience is white settlers — the descendants of European immigrants — in North America.

Past and present Indigenous dispossession is the “primal sin of settler colonialism, haunting us and demanding a reckoning,” Enns and Myers say.

Myers and Enns center the narrative on Enns’ family story. She discusses the parallels of Indigenous people’s trauma to the trauma her ancestors faced. She draws these comparisons in a way that does not minimize the destructive role of white settlers, the ongoing impact of white privilege and the genocide inflicted on Indigenous people.

The specificity of her stories invokes a curiosity to learn more about our own histories and hauntings. One example: Enns describes the experience of her great-grandmother, whose home in Ukraine was taken over by anarchist soldiers in 1917. Some Mennonites believe that they endured the Russian Civil War because they were “tough.”

Enns isn’t fooled by this assertion. She has uncovered serious trauma, including sexual trauma, in her family histories. She goes on to wonder if men were praised for sacrificing their lives or fleeing as pacifists while women survived sexual assault silently and shamefully.

Pushing down this pain — especially women’s pain and perspectives — or even eliminating it from family stories diminishes white settlers’ capacity to empathize with others and promotes victim-blaming, paternalism and superiority toward Indigenous people.

She moves on to describe other hauntings, for example, how Mennonites benefited from lands and protections in North America. She describes the cultural genocide of adoption of Native children and the abuse at Indian Residential Schools.

Enns Walks us through her own bloodlines as a community of German-speaking, Russian Mennonites on the Canadian prairies. Her narrative covers three bioregions (Ukraine, Saskatchewan, California), three centuries (19th to 21st), three communities (Mennonite settlers, non-Mennonite settlers and Indigenous people) and two countries (Canada and the United States). She names the contradictions as she inherited “both the racial privileges and brokenness of whiteness, the strengths of my Anabaptist faith tradition and the wounds of intergenerational trauma.”

The book is organized by three concepts: Landlines, Bloodlines and Songlines. Landlines are places of personal, communal and ancestral inhabitation, now and in the past. They hold deep stories of human placement and displacement. Bloodlines are social and kinship identities, not technical “blood relatives.” Songlines are traditions that inspire practices of justice and compassion and sustain resilience.

Enns acknowledges that her Mennonite community’s peace and justice work responds more quickly in Africa or Latin American than among Indigenous people in our North American communities. She reminds us that settlers’ primary responsibility is to decolonize where we are, not somewhere far away. This reminded me of Mennonites’ tendency to attend to violence in distant countries instead of talking about the sexualized violence in our own homes.

This book is personal, challenging and complex. It reminded me that my white-settler work to repair haunted histories starts within myself, my family and my community.

Anna Groff is director of Dove’s Nest: Faith Communities Keeping Children and Youth Safe. She lives in Tucson, Ariz., on Tohono O’odham land and is a member of Shalom Mennonite Fellowship.