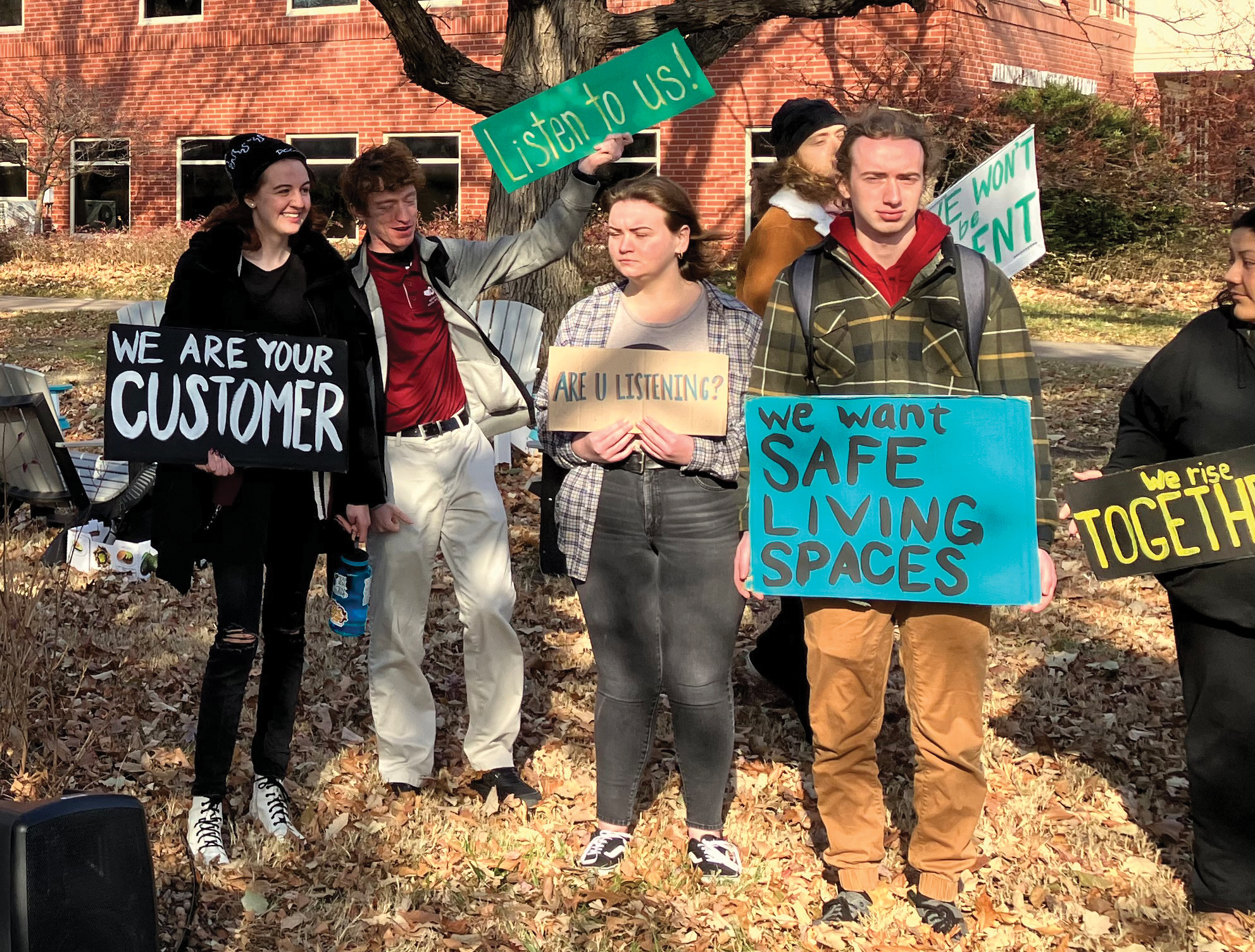 About 60 Hesston College students walked out of Formation (chapel) on Dec. 2 to protest what student leaders described as an unsafe campus where college staff minimized or ignored reports of sexual assault.

They walked from Hesston Mennonite Church to the “Community Healing Circle,” a new monument south of the Administration Building, where four students spoke to a crowd of about 90 people, mostly students. Two students told of being sexually assaulted.

“Numerous students have been hurt by Hesston College administrators and staff, and we will not let this continue any longer,” said a student who asked that her name not be used in Anabaptist World. “So far, we have had a lot of talk and a lot of emails, but no show.”

Kara Longenecker of Harrisonburg, Va., said she had “watched Hesston take inappropriate measures, invalidate feelings and turn people away. . . . Hesston seems to care more about the image of the college and meeting the needs of donors instead of meeting the needs of students.”

One student said she had been sexually assaulted but avoided going to Deb Roth, vice president of student life, because Roth had mishandled or minimized previous cases. The students’ list of demands included that Roth be fired.

The student said she knew of assaults students did not report because they did not feel comfortable doing so. “I pray that we are finally heard,” she said. “It is time to apologize to those who have been hurt and wronged.”

Another student said she was one of multiple students on her floor who were sexually assaulted. “I was sexually assaulted four times in one semester in my own living space,” she said. “I was discouraged of going to Title IX by the campus pastor because it wasn’t a big enough problem, it wasn’t serious enough. . . . We should not have to hide our stories and pretend they never happened.”

Three of the four students who spoke publicly asked not to be identified in AW.

In response to complaints, the college is conducting a review of its Title IX policies and practices. Title IX is a federal law that prohibits discrimination based on sex. During the review, Roth is not meeting with students or involved in discipline issues.

Responding to AW’s request for comment, Roth said: “When situations like this are reported, I am legally bound by the Family Educational Rights and Privacy Act of 1974 ­(FERPA) for all documentation of follow up or outcomes to remain confidential.”

Complaints about Hesston College’s handling of sexual violence reports were publicized by Into Account, an Anabaptist-led nonprofit that advocates for survivors of abuse in Christian settings.

On Sept. 26, Into Account cited “numerous reports” of sexual violence at Hesston. On Dec. 5, Erin Bergen, director of student advocacy for Into Account, said the organization had received “at least 14 more stories.” She said the majority happened in the last two years, but some reports did not include dates.

Del Hershberger, vice president of admissions, speaking on behalf of the college, confirmed three reported rapes on campus, in 2018, 2020 and the spring of 2022.

The students’ demands, sent to the college community before the Dec. 2 walkout, include hiring a female campus counselor and an additional resident director; not forcing survivors to face perpetrators and “reconcile”; creating a curriculum to educate students on Title IX policies, sexual violence and bystander training; enforcing no-contact orders; and training staff so that students can report incidents without fear of being ignored or dismissed.

“Hesston College has a sexual violence problem,” the student organizers wrote, adding that “survivors are dropping out while their perpetrators have been allowed to graduate without consequence.”

About 10 students were involved in writing the list of demands. It was “created over an extensive process of research, conversation and collaboration with survivors of sexual misconduct and Into Account experts,” the students wrote.

Responding to questions from AW, college officials said that they had re­viewed Title IX policies and practices twice over the last several years and that the current review was being done “to be sure we are still following best practice.”

The review is being conducted with the Cozen O’Connor Institutional Response Group, attorneys who investigate sexual and gender-based harassment and violence.

“The student demands will inform our work and that of Cozen O’Connor,” said Hershberger, speaking on behalf of the college. “The review process will be thorough, trauma-informed and sensitive, and, most importantly, be designed to gather information that will inform and drive action.”

He said that the college took the students’ demands seriously. “None of us can predict what we will learn and what decisions will be made, but we believe a healthy process will lead us to healthy solutions, including revisiting prior decisions,” he said.

The demands include taking down a portrait of founding president Daniel Bender or putting up a plaque about his sexual misconduct, the rape of his daughter.

According to the college’s 2009 centennial history, A School on the Prairie, by John E. Sharp, Bender in 1930 confessed to incest with teenage daughter Ruth Bender 10 years earlier. His confession came after a pastor made public a so-called “secret sin” Ruth Bender had revealed, under pressure at a revival meeting, to the pastor. A committee of the Mennonite Board of Education determined the abuse was more than a single event and continued for some time, Sharp wrote.

Daniel Bender resigned the presidency, and Ruth Bender, who taught French and Latin, was dismissed from the faculty, as “prominent townspeople” demanded.

Student organizers said administrators had been asked to take down “predator Daniel Bender’s” portrait, which hangs in the Administration Building, “multiple times, and they said no, due to it being part of ‘Hesston’s history.’ ”

The “Community Healing Circle,” where students gathered Dec. 2, was installed in May, with a plaque acknowledging “past shortcomings and errors” and “acts of violence that have broken the bonds of trust in our community. We resolve to listen and believe those who have experienced harm in our community’s care.”

In a statement, the college said the monument “was not addressing specific situations” but “speaks to our institutional values” and “creates a space for our community to interact in thoughtful ways.” A dedication is planned.