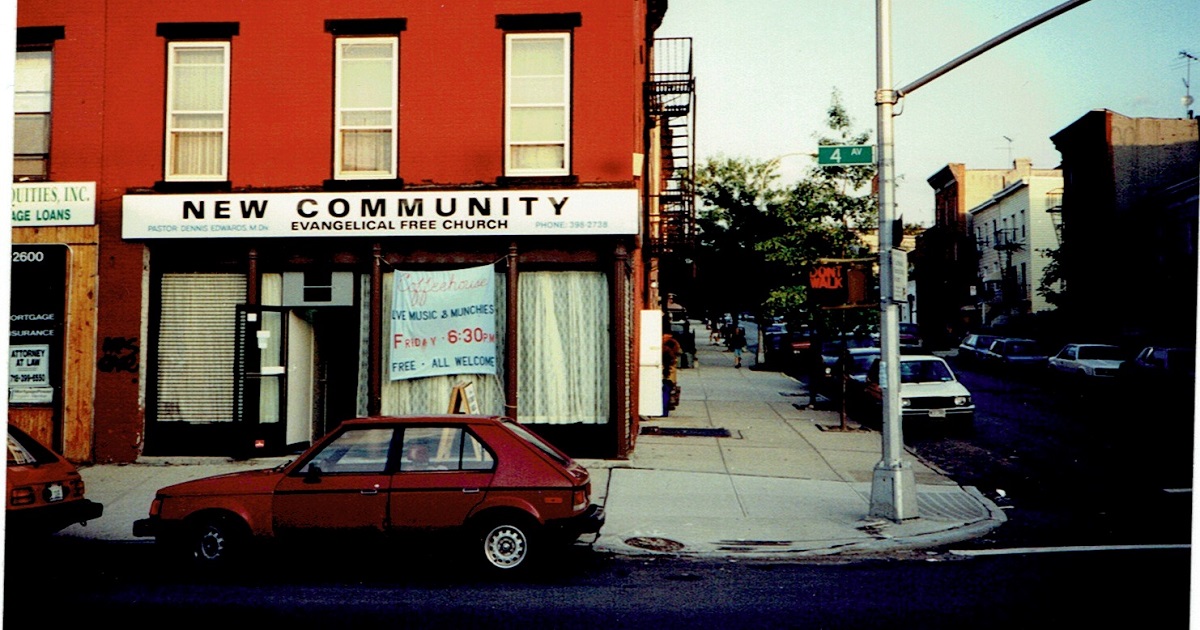 Photo provided by the author

This article comes from the November issue of The Mennonite, which focuses on “Journeys with church.” Read more reflections here or subscribe here to receive more original features in your inbox each month.

“Church is something I go to, not something I’m part of.” A young person made this statement as they were leaving the church I was starting out of the Brooklyn, N.Y., apartment where I, my wife and four small children lived. Surely there were people in the United States who felt the same way about church as this departing person, but I didn’t believe any in our group had that attitude. I became a church planter because I didn’t think church needed to be a spectator sport or be segregated and irrelevant—perspectives I held as a young man.

In the mid-1980s, as I was discerning my call to church ministry, I became enamored with the idea of planting a multiethnic church that would be active in its community. Even though I’d met several white pastors who claimed their church was “like the United Nations,” I realized we had different views of the United Nations. They seemed to view it as an organization led by white Europeans with dark-skinned people attending as guests but not sharing in power or decision-making. I viewed the U.N. as representing equality among various nations, with leaders who could be nonwhite and non-European.

In 1987 or so, I became acquainted with the writings of John Perkins, whose name has become synonymous with Christian community development. He influenced my thinking about church. And as a native New Yorker, I was struck at how churches—at least back then—were typically segregated by race and class, even when functioning in English. And few churches engaged their neighbors in constructive ways. New York has always been racially and ethnically diverse, but as I was growing in my Christian faith, I investigated and found few churches that reflected the diversity of the city and engaged in what was called holistic ministry—ministries of justice and mercy. I wanted to see churches that were not only integrated on Sunday mornings but viewed their diversity as part of a larger ministry of racial reconciliation. (That was the language in the 1980s. Now I speak of racial justice rather than reconciliation.) I worked with a denomination that sought to plant urban churches throughout the United States. For many whites, urban was a euphemism for dark-skinned and poor. But I understood urban to mean diverse—racially, ethnically, economically. After starting a group to study the Bible, I listened to them express the desire to worship more traditionally—on Sundays with a public service. It was at this point that the young person, mentioned above, said they would leave. Their answer to my inquiry as to why they were leaving was, “Church is something I go to, not something I’m part of.”

Ironically, a few weeks later, the same person called to ask for help. They were sick and needed someone to help pick up their medicine and do some light housework. The person asked for Susan, my wife, to stop by. I was frustrated and didn’t want her to go, but she wanted to help and did. The young person who left did not seem to understand that the reason they felt free to call and ask us for help is because we understood that church is indeed something to be part of, not just a place to attend.

The church we started in Brooklyn was named New Community, but it no longer exists as an entity. There were too many issues working against our growth. And we were ahead of our time. Today it is commonplace to hear Christians speak of multiethnic churches. Books abound by people half my age who seem to have discovered the secret to multiethnic ministry, often without acknowledging the groundwork pioneers laid. But back then, few people seemed to catch the vision for the power of diverse Christian community.

Since that Brooklyn experience, I’ve been a pastor of a church on Capitol Hill in Washington, planted a church in a different part of Washington and been a senior pastor of a young, urban, multiethnic church in Minneapolis, Minnesota. Despite all the pain and joy I experienced, I still believe churches serve an important role in the world. After all, Jesus told his disciples he would establish his church, and the powers of death (i.e., “the gates of Hades”) will not prevail against it (Matthew 16:18). This means the church will never die. Contemporary churches may have a lifespan, but the people who were part of those local congregations may be forever members of the one Church that is beyond the bounds of time and space. There are a few big-picture things I’ve come to hope for in local churches that serve as expressions of the one Church.

I hope for churches to be Jesus-centered. That may seem obvious, but I’ve noticed that in the United States, many churches are often centered around something else, such as the personality of a leader or children’s programming or nationalism or even partisan politics. The exuberant support President Trump gets from many white Evangelical churches casts doubt on how Jesus-centered those churches are. Churches also help people engage with the Bible, which should be read with Jesus as the interpretative center.

I hope for churches to be increasingly diverse. Diverse is a word that can be hard to define, as different people take it to mean different things. I encourage Christians to repeatedly define it. Let diversity refer to race, gender, economic class, varying degrees of physical disability or age. The list goes on, as do our efforts to live into the ideal.

I hope for churches to decentralize leadership. Some are called to be apostles, some to be prophets, some to be evangelists and some to be pastor-teachers (Ephesians 4:11), but no one is called to be a dictator (Matthew 20:25-26; 1 Peter 5:3). Too many people get silenced or minimized in church because of power-hungry or merely short-sighted leaders. The voices of women and people of color have been muted for far too long. In today’s climate, it would be quite a testimony to see more white people defer to leaders of color.

I hope for churches to foster genuine community among their members. Family is one metaphor for church that can appeal to a wide cross-section of people. In this family we learn to be disciples of Jesus. Online relationships are real, and social media can help keep us connected to others. We can learn from podcasts and books. But there is no substitute for sharing experiences and resources, living as part of a community that loves and respects you. It’s like the line from the old Cheers theme song by Gary Portnoy and Judy Hart-Angelo:

This isn’t to say church is a place. Church is the people. But we should gather as people who know and value each other.

I hope for churches to be agents of transformation. Jesus said the greatest commandment is to love God and love others (Matthew 22:37-40). When we strive to love God and love all people, we will be people who help bring positive change to a chaotic world. We will work against injustice. We will love those who are alienated. We will listen to those who have been shut out. We will break down walls and build more bridges.

Susan and I have four adult children and two grandchildren. I hope they’ll find churches they can be part of and not just attend—churches that are less concerned with their size than with how to serve Jesus by loving God and loving people.

Dennis R. Edwards is associate professor of New Testament at North Park Theological Seminary in Chicago. He is the author of What Is the Bible and How Do We Understand It? (October 2019, Herald Press) and the forthcoming Might from the Margins: The Gospel’s Power to Turn the Tables on Injustice (September 2020, Herald Press).