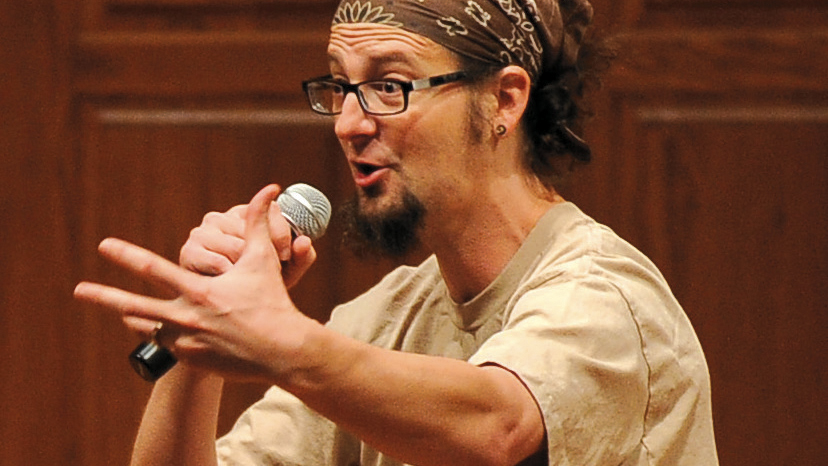 It started in 2004 as a little Bible study looking at the political implications of Jesus’ teaching and the social dimensions of the gospel.

Four years later, during the 2008 presidential election, I published a book with Chris Haw called Jesus for President and took the movement out on a national tour, traveling through nearly every U.S. state in a bus that ran on waste vegetable oil, hosting packed-out rallies in different cities each night.

We had some solid ideas for serious change in America back then. Like putting the Amish in charge of Homeland Security and melting all of our weapons into garden tools and enacting the biblical year of Jubilee, where property is redistributed and financial debts are forgiven. We were dead serious about some of those ideas (and still are).

One thing that has not changed is that Christians still have a hard time knowing how to engage with politics, especially during an election year.

Some Christians ignore politics altogether, preferring to focus on matters like saving souls and getting people into heaven. They often quote Scripture about how our “citizenship is in heaven” and insist that this world is not our home. Politics don’t belong in the pulpit, they say (unless it’s abortion or marriage equality). Jesus didn’t come to overthrow Caesar and take over Rome, but to establish an altogether new kingdom that is not of this world. So it goes.

Another group of Christians has totally bought into partisan politics and married itself to these Christians’ favorite candidate or party. If they are evangelicals, that usually means the Republican Party. As my friend Tony Campolo says: “Mixing our faith with a political party is sort of like mixing ice cream with cow manure. It doesn’t mess up the manure, but it sure messes up the ice cream.”

More recently, I have become familiar with the progressive version of the savior complex; it still messes up the ice cream.

As people of faith, we are desperately in need of a better political imagination — one not confined by party or candidate or the culture wars at all, but one wholly rooted in our faith. We need to be as peculiar as we are political. Jesus was both — political and peculiar.

Nearly every time Jesus opened his mouth, he talked about the “kingdom of God.” The word he used for “kingdom” was the same word as “empire.” But his empire is upside down. The first are last, and the last are first. The mighty are cast from their thrones, and the rich are sent away empty. The poor are blessed, and the peacemakers are “the children of God.” Literally, Jesus blesses the people this world has cursed and rebukes the people this world has idolized.

According to Jesus, the kingdom of God is not just something we hope for when we die. It is something we are to make “on earth as it is in heaven,” apparently while we’re alive, now. It is an invitation to join a revolution that transforms the world from what it is into what God wants it to be.

We know because he talked about the real stuff and real people — unjust judges, day laborers, widows and orphans: political stuff. The golden rule — love your neighbors as yourselves — can’t be followed if we ignore the policies and powers that are crushing the lives of our neighbors. Jesus was political in the sense that the word “politics” derives from “citizens” — meaning our neighbors.

As much as Jesus’ vocation was political, it was also peculiar. His entire life (and death) is a parody of power, political satire on a whole new level, a political photobomb that took attention off of the centers of power and put the spotlight on the margins.

Jesus came straight outta Nazareth: a brown-skinned, Palestinian, Jewish refugee from a town out of which people said, “Nothing good could come.” This was what determined his view of power. When confronted by tax collectors about whether he paid his taxes, he pulled money out of the mouth of a fish, questioning what really is Caesar’s and what is God’s.

He called Herod a fox and flipped tables in the Temple. He included the excluded and challenged the chosen. Entering Jerusalem, he did not ride a warhorse with a military entourage like Caesar, but a borrowed donkey. Political satire. Street theater of the holiest kind. Instead of the iron fist of tyrants, Jesus ruled with a towel washing his disciples’ feet. He was accused of insurrection, arrested, beaten, tortured by the state and finally executed.

His execution, directed by the Romans, was also political parody of the highest order. His throne was an old rugged cross. His crown was not made from olive branches like Caesar’s, but thorns. Nailed to the cross read a sign, “King of the Jews.”

Jesus outdid the Romans’ attempt to join in his parody by rising from the dead — the greatest act of protest in history.

The word “savior” was not just used for Jesus. It was also used for Caesar. On the imperial walls in Asia Minor, nearly a decade before the birth of Christ, these words were written: “emperor Augustus . . . who being sent to us and our descendants as Savior, has put an end to war and has set all things in order, having become god manifest. . . . The birthday of the god Augustus has been for the whole world the beginning of the good news.”

The words attributed to Jesus in the Gospels — Lord, savior, Incarnation — were already attributed to Caesar. The imperial calendar revolved around the birthday of Caesar, not Christ. You start to see why the politics of Jesus are so radical, so revolutionary and so controversial. Every time the early Christians declared “Jesus is Lord,” they were also declaring, “Caesar is not.”

That confession was deeply and subversively political. It was just as strange to say “Jesus is my Lord” 2,000 years ago as it would be to declare him commander in chief today. It was an invitation to a new political imagination centered on the person, teaching and peculiar politics of Christ.

One of the greatest temptations during election year is to misplace our hope. We are tempted to put our hope in a party or a candidate who we think will save us from the chaos we are in. But as the old hymn goes, “My hope is built on nothing less than Jesus’ blood and righteousness. On Christ the solid rock I stand; all other ground is sinking sand.”

There is a lot of sinking sand these days. Lots of big promises and empty words. We are bound to be disappointed if we put too much hope in a person or a party.

Joining the politics of Jesus is about joining God’s redemptive plan to save the world. It is about allegiance, hope and a new kingdom. So I am indeed hopeful in 2020 — not because I have found a candidate who fulfills my deepest hopes, but because I have learned how to hope differently.

My hope does not lie in Donald Trump or Joe Biden, or even America. My hope is in Christ alone.

Now that we’ve established that — let me be clear. I will be voting on Nov. 3. But I will not be looking for a political savior. I will be looking to do damage control. I’ll be trying to harness the principalities and powers of darkness that are hurting so many children of God. I’ll be voting for the politicians who I believe will do the least amount of damage to the world and alleviate the most suffering for the most people. Though that may sound cynical, I think that’s an appropriate theological posture to have.

There are those who will opt out because they don’t want to hold their noses and vote, and still others who refuse to choose between the lesser of two evils.

But opting out also has consequences. Privilege is being able to choose which issues matter and which ones do not. Privilege is being able to opt out of decisions that have life and death consequences for other people. I believe this election is a referendum, and we have power that we can steward on Nov. 3. I want to look back and say I did everything I could to stand against fear, and racism and violence — including vote. We need to use every tool in our toolbox.

Vote for love. When we vote for love over fear, we can rest confidently that we voted our faith and put flesh on our prayers.

Surely, Election Day is not the only day we make a difference. I will also vote every day before Nov. 3 and every day after Nov. 3. Change is not confined to one day every four years. Change happens every day. We vote with our lives. Social change doesn’t come from the top down. It comes from the bottom up — just like water boils.

The holy work of seeking first the kingdom of God is not confined to a ballot box. No matter who gets elected in November, we will need to be in the streets in January holding them accountable.

Shane Claiborne is a Christian activist and author who has spoken at Anabaptist churches and conferences.