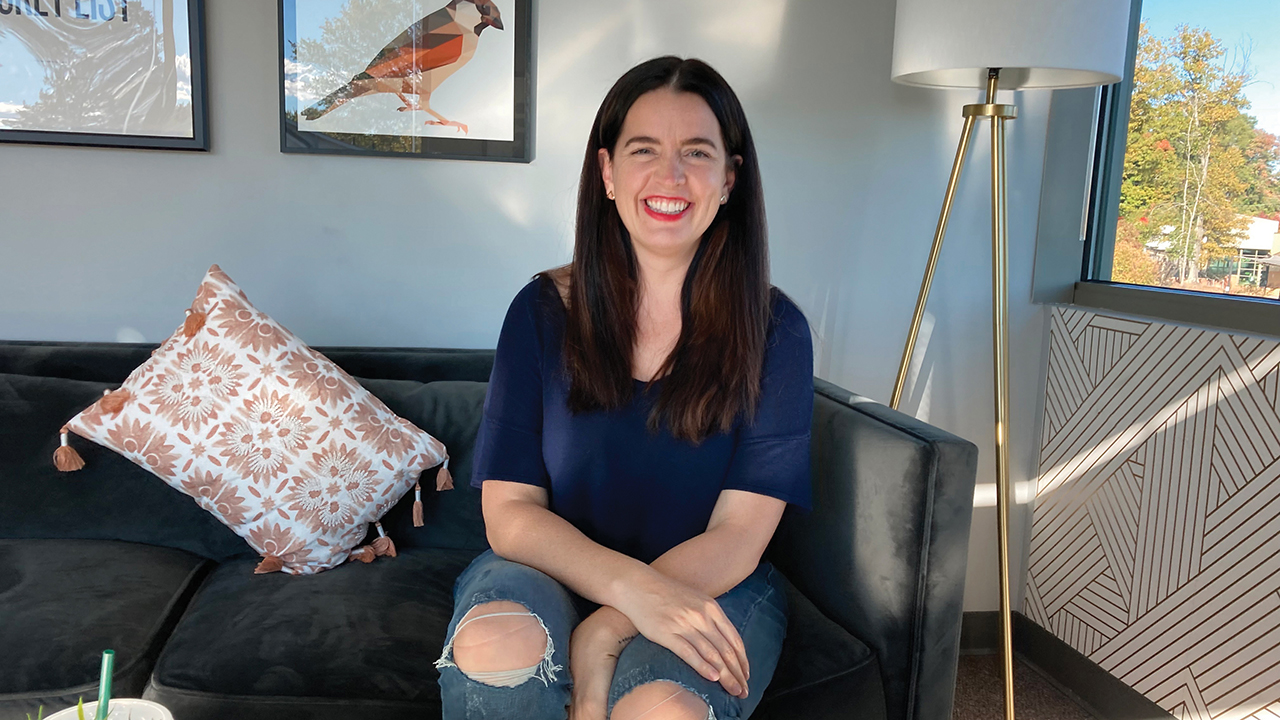 Kate Bowler in her off-campus office, where she produces her “Everything Happens” podcast. — Yonat Shimron/RNS

Atop a bookshelf in a room next to her office, Kate Bowler and her team have assembled a series of framed anti-self-help sayings. “The universe stabbed me in the back,” reads one. Another: “What doesn’t kill you might try again tomorrow.”

And perhaps the punchiest and most direct: “Okayest life now.”

The latter, a reference to the 2004 bestseller Your Best Life Now, is a direct refutation of a book by televangelist Joel Osteen, which preached that anyone can get rid of negativity by unleashing positive thoughts. Happiness and prosperity are within reach if people would only believe in themselves.

Osteen’s relentless positivity is precisely the mindset Bowler wants to take down.

As proof of the fallacy of positive thinking, consider Bowler’s life story. Six years ago, as a then-untenured professor at Duke Divinity School with a toddler at home, Bowler was diagnosed with Stage 4 colon cancer. After countless surgeries and years of immunotherapy, she survived, but her health is fragile and will likely remain so.

Her new book, No Cure for Being Human (And Other Truths I Need to Hear), her second memoir, looks at how she’s come to terms with her new reality and the knowledge that, actually, all things are not possible.

“I do not believe God will provide for every need or prevent every sorrow,” she writes. “Nothing will exempt me from the pain of being human.”

In 200 lyrical pages, she takes issue with bucket lists — a form, she says, of “experiential capitalism” that convinces people to take expensive excursions to jump out of airplanes or touch every continent without actually grappling with their mortality. She describes her grief at being told she should not have another child. She bemoans her scarred belly “studded like braille from surgical staples” and concludes that, despite all she’s gained in perspective, life “before was better.”

“There’s not a lot of books that open up the human experience in ways that are warm and funny but also allow for deep pain,” said Lyz Lenz, an Iowa writer who is friends with Bowler. “She doesn’t shy away from darkness.”

Bowler’s book, along with her popular podcast, “Everything Happens,” in which she interviews people about grief, living with uncertainty and staving off loneliness, have ushered her into a growing role as a public intellectual. Her work, though, is directed not at the academy or even the church — she is a historian of American Christianity who made her academic mark by writing a history of the prosperity gospel — but at a far wider audience that includes those who have suffered loss and others interested in making sense of their lives.

The offices for the Everything Happens Initiative lie 1.5 miles from the limestone neo-Gothic divinity school on Duke’s east campus. Here, she and a team of eight — four full time and four part time — produce the podcast and a host of ancillary products: most recently, a devotional by Bowler and her executive producer, Jessica Ritchey, called “Good Enough.” The team writes Instagram blessings, a newsletter and short videos.

Last year, during the COVID lockdown, she and her family (husband, Toban, and son Zach) retreated to their hometown of Winnipeg, Man. Bowler thought she’d produce six or so podcasts but ended up recording 40 — so great she felt was the demand for content around pain, fear and isolation.

The latest season of the podcast includes 17 guests, among them actress Julianna Margulies, writer Malcolm Gladwell and Franciscan priest and mystic Richard Rohr. The podcast has been downloaded 5.9 million times since it debuted in 2018. Like her first memoir, Everything Happens for a Reason: And Other Lies I’ve Loved, which sold more than 200,000 copies, these ventures have made her a cultural icon, not unlike the celebrity preachers she’s written about.

“When I started all this, I was incredibly lonely,” Bowler said. “I hated feeling I was on the other side of the plexiglass and all the normal people were living their gorgeous, dumb, lucky lives, while I was stuck with my tragedy. Now I don’t ever feel like that. We get to host conversations with these really beautiful people who truly understand, and we get to give that to people who are in a lot of pain, especially during the pandemic.”

Bowler’s renown continues to grow. Over the past few weeks she has appeared on the Today show and Good Morning America. The new book hit No. 4 on The New York Times Best Sellers list a week after its release.

Will Willimon, a retired United Methodist bishop who has taught at Duke Divinity for years, said the school acknowledges Bowler is a star.

“Behind a lot of her work is a prophetic critique of American consumerist culture, of American fantasies and our sense of exceptionalism,” Willimon said. “She’s a well-formed Christian in the Mennonite tradition who responds to pain, difficulty and challenges differently than others, and she’s so successful at communicating that.”

Before the cancer, Bowler loved to make five- and 10-year plans. Now she said she’s become good at making one-year plans and letting them go if life deals a setback.

“The worst version of this would be to try to do everything at a more accelerated pace,” Bowler said. “I don’t want that version. I’m aiming at the version of life that feels really full and beautiful and there’s all kinds of things to love in it, but there’s not going to be a sense of completion and doneness. . . .

“We can be people of deep hope. That is not the same thing as saying our lives are going to work out. I believe God is drawing us toward a future that is fundamentally a story of love and the salvation of the world.

“That’s not the same thing as saying that my life is going to play out the way I imagined.”