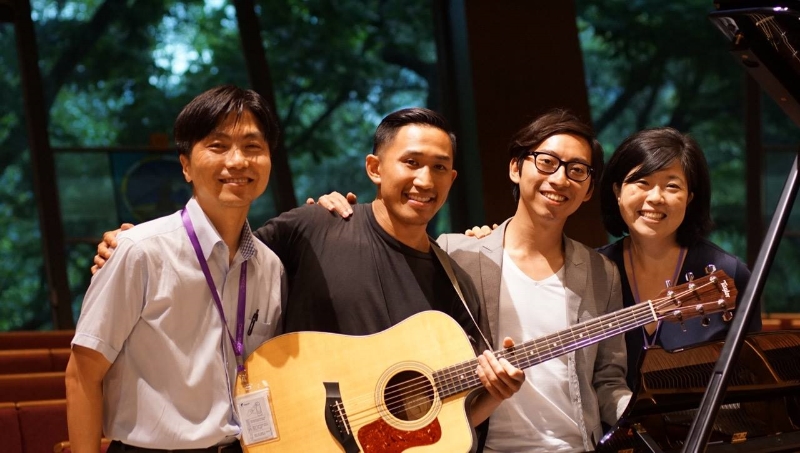 Sue Park Hur co-pastors of Mountain View Mennonite Church in Upland, California, with her husband, Hyun. The Hurs also lead ReconciliAsian, a peace center in Los Angeles that equips leaders in Korean and Asian American churches and communities to serve in ways that promote unity, justice and peace towards reconciliation. This blog first appeared on the ReconciliAsian website.

On May 22, I took the red eye flight to Hong Kong to attend the third annual Christian Forum for Reconciliation in Northeast Asia hosted by Duke Divinity School and Mennonite Central Committee. The forum brought together 55 Christian scholars, educators, practitioners, pastors, and church leaders from mainland China, Hong Kong, Japan, Korea, and the U.S with the purpose of strengthening our work for God’s ministry of peace and reconciliation in Northeast Asia.

This forum being my third, I looked forward to reconnecting with people who have become dear friends as well as meeting new participants with rich experiences and fresh perspectives. For five full days, we engaged a scriptural vision of reconciliation in the new creation, the need to lament the past, bear witness to the hope in the journey, and be equipped for the long road towards reconciliation.

One of the distinct elements of this forum was that it was highly participatory. I was invited to be part of the worship planning team coordinating the eight services for the week with other participants from various countries. I enjoyed learning the new songs in Japanese, Korean, and Mandarin, each of us proclaiming in our heart language that we serve the Prince of Peace who unites us in the new creation.

Chris Rice, the lead organizer of the Forum, always began the day by inviting us to name the gifts we received the previous day. There were so many gifts from the forum, but I wanted to share just two of them here.

Lament is a spiritual discipline: On the third day of the forum, Ellen Davis, the interim dean of

Duke Divinity School, gave a lecture on the Psalms of lament. She reminded us that lament is a spiritual practice that does not come naturally. Whining comes naturally, but lament is difficult theological work. Complaint is natural, but it does not transform us, whereas in the process of genuine lamenting to God, new vision unfolds and we can be transformed.

Her insights gave us a framework to lament the pain and despair we see so much in Northeast Asia. It provided a guideline to trust that the one we cry out to hears and transforms us, bringing us to a place of hope.

Discipleship is costly: After the morning session with Davis, we took a ferry and headed to Macau, a special region of the Peoples Republic of China.  I was aware that Macau is considered the “Vegas of China,” but did not know that the region possessed such rich Christian heritage. Professor Xi Lian of Duke University commented that Macau was the birthplace of Christianity in Northeast Asia, a place of learning for Asian missionaries returning to their homeland to share the gospel.

Sister Hae Young Choi from Catholic University of Korea told me that the statue was of Saint Kim Taegeon Andrew, the first Korean Catholic priest. It was in Macau in 1826, at the age of sixteen, that St. Andrew Kim first came to study at the seminary. Later, in 1844, he was ordained in Shanghai and returned to Korea to preach and evangelize. He was martyred for his faith in 1846 in Korea at the age of 25.

As a mother of a 16-year-old son, I considered not only the immense calling and sacrifice of St. Andrew

Kim, but of his parents. Would I have been able to able to let go of my son and send him on a perilous journey overseas knowing that I may never see him again?  Did they send St. Andrew to Macau knowing the danger of being martyred once he returned to Korea?

I don’t know to what extent they knew who their son would become, but they knew that it would be costly. Being a disciple of Jesus is costly.

In standing before the statue with other Korean participants, I recognized that this was sacred ground. The kernel of wheat that fell and died has indeed produced many seeds. We who gathered under St. Andrew’s statue were Koreans living in South and North Korea, Canada, and the U.S. Although we were from multiple denominational backgrounds, we have committed to the work of peace and reconciliation, recognizing that this is at the heart of the gospel. The work before us is a gift and a privilege given to us from the sacrifices of our ancestors, and we embrace the calling to continue following Jesus who unites us.