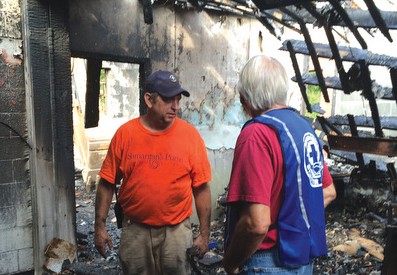 A Mennonite Disaster Service staff member and the MDS Region I director visited Briar Creek Road Baptist Church near Charlotte, N.C., July 29 to assess the needs for support in rebuilding a burned building on the property.

During the last week of June, several predominantly African-American churches were burned in southern states, charring either their main building or other structures on their property. Three of the five fires were determined to have been set intentionally.

While the fire at Briar Creek Road was declared arson, officials have not determined if it was a hate crime.

Samaritan’s Purse works with MDS in other disaster responses in the U.S. and Canada and invited MDS volunteers to assist in the cleanup and rebuilding of the church structures.

“Major damage was done to one of several buildings on their property,” Stoner said. “The goal is to remove all the debris from the floor and begin to remove some of the roof debris.”

Stoner and Troyer planned to contact their churches and MDS volunteers to assist in the project as needed. Taylor asked MDS to explore the situation of another church that was burned in South Carolina.