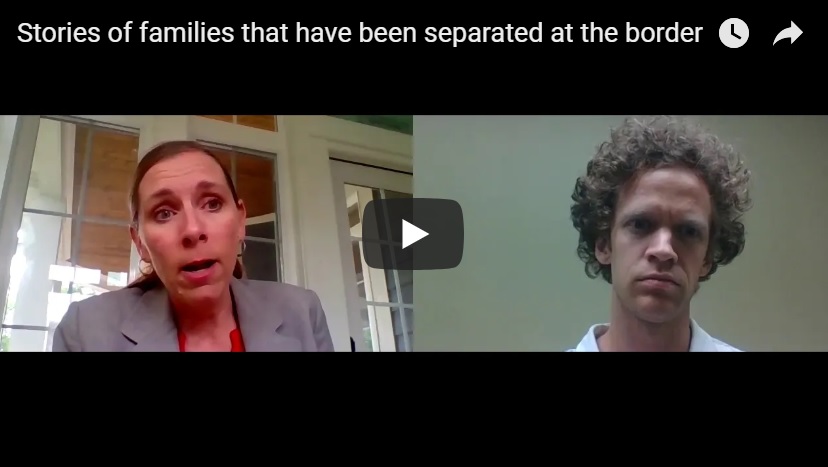 First, in this video, Koop tells the story of Ms. L, who is the named plaintiff in the ACLU’s family-separation litigation and is represented by National Immigrant Justice Center attorneys.

Second, in the written interview below, Koop describes what people can do to get involved and make a difference.

Good: There’s been a lot of conversation the past week around the federal government separating adults and children at U.S. borders. I want to ask you about what people can do in response, to take action if they wish. But first I want to make sure we’re on the same page about how to understand the Trump administration’s “zero tolerance” policy that was announced by Attorney General Sessions in April. My understanding is that the government separating families grows out of this zero-tolerance policy, which seeks to prosecute as many border-crossing offenses as possible and applies to all adults, whether or not they are crossing with children. Because a child can’t go into custody with a parent the government is prosecuting, the natural result is to separate them. Previously, the federal government declined to prosecute adults with children because they’re often seeking asylum and it’s not possible to prosecute everyone who is attempting to enter or who is entering the country without the proper documentation. Is this an accurate understanding of what’s going on?

Koop: The Trump administration has been talking about separating families at the border for months. When he was Secretary of Homeland Security, Chief of Staff John Kelly suggested he might order the taking of children from their parents in order to deter families from entering the United States to seek asylum. So, while the government talking points are about family separation being a necessary byproduct of their “zero tolerance” policy, inflicting this kind of harm on families has been an objective of theirs since day one. Even if one accepts the premise that the government is doing this because they wish to criminally prosecute all noncitizens who enter without documentation, that would require, at most, a few days of separation. Illegal entry is a federal misdemeanor for which most noncitizens are sentenced to “time served,” meaning their sentence is largely satisfied by the time they are convicted. We are seeing children held in facilities away from their parents for months, long after any criminal sentence is complete. What’s more, we see cases where families who presented themselves at ports of entry and therefore did not commit “illegal entry” were separated. This clearly belies the assertion that this is connected to criminal prosecutions for illegal entry and is only happening to the extent necessary to enforce that law.

Good: I’ve heard folks say, “If migrants would cross our borders legally, then they wouldn’t have to be separated.” How would you respond to that?

Koop: It is simply not true. At NIJC, we represent Ms. L, who is the named plaintiff in the ACLU’s family-separation litigation. She presented herself at a port of entry with her 6-year-old daughter, who was taken from her within days of their entry. They were held separately for about four months. It’s also important to note that it is not illegal to seek asylum, and the suggestion that asylum seekers deserve to have their children taken from them because they could not figure out a more “legal” way to come to the U.S. is odious.

Good: What can people who want to respond to this situation do? What are the best ways people can get involved and make a difference?

Koop: People of conscience need to keep attention on this issue until our government stops tearing children from their parents. Letters from churches, postcard campaigns, calls to lawmakers, op-eds and other demonstrations are critical. And communities should pay close attention as Congress considers laws that purport to end family separation. Some of the proposals would “end” family separation by rolling back legal protections for children. To stay up to date on these development, people could sign up for NIJC’s action alerts at immigrantjustice.org. It is also important to support groups who are fighting this and all the other policies of the Trump administration that hurt families and compromise due process and human rights. We are straining to respond to this crisis, and having resources to serve our current and future clients is critical.

Good: The Texas Tribune put together a list of organizations that are mobilizing to help immigrant children separated from their families, for those who want to get involved and contribute financially. Thank you, Ms. Koop, for sharing with The Mennonite.