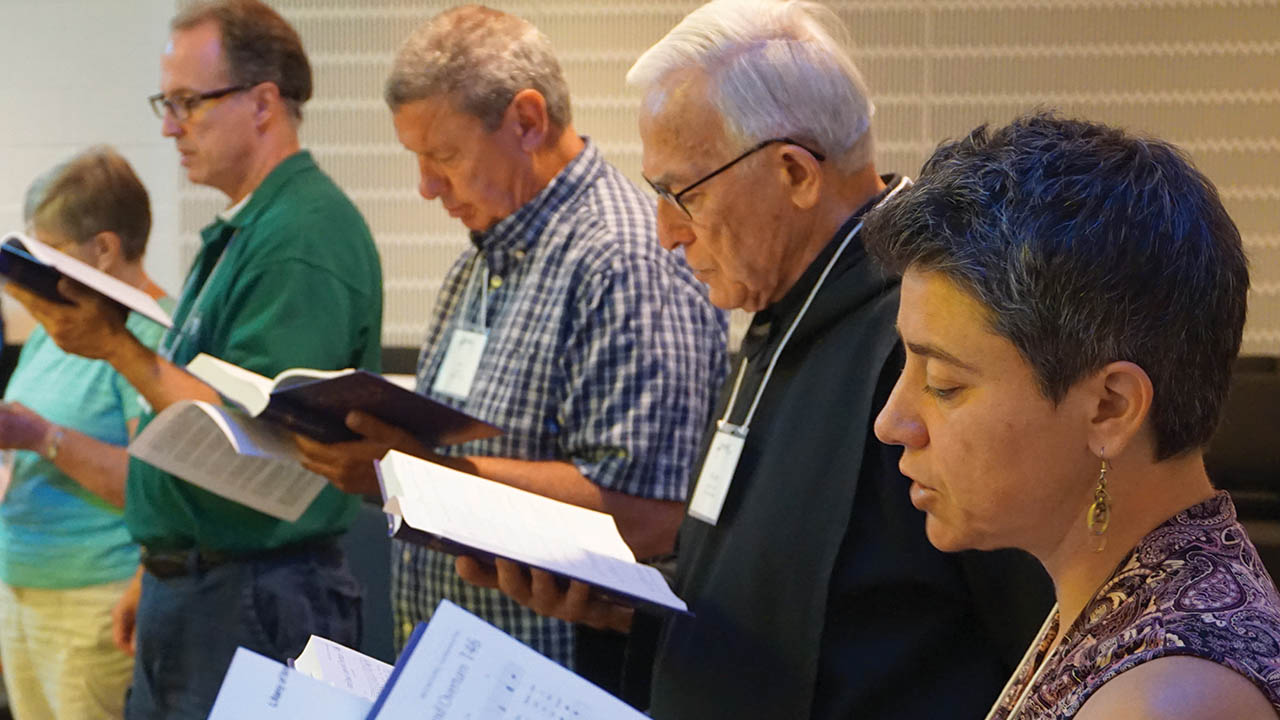 Participants in the Bridgefolk movement for dialogue and greater unity between Mennonites and Roman Catholics have long made “proceed through friendship” their byword.

Celebrating their 20th annual conference under the theme “Standing at the Crossroads” as they met at Saint John’s Abbey in Minnesota July 21-24, Bridgefolk found reason to hope that the steady relationship-building that is basic to its “charism,” or gift, might also help their churches face a challenge that their traditions share.

Both Mennonites and Catholics are at a crossroads, after all, reminiscent of the one where the prophet Jeremiah told Israel to “ask for the ancient paths” and walk “the good way.” The challenge is to find ways to repent and repair the legacy of harm done to Indigenous peoples in Canada and the United States through historic removal, European settlement and misguided mission efforts.

How to seek just peace through racial justice and Indigenous/settler encounter has been a theme in recent Bridgefolk conferences. This year’s theme proved particularly timely when the Vatican announced that Pope Francis would make an apology just days after Bridgefolk’s conference to the Metis, Inuit and First Nations peoples of Canada for the “deplorable” abuses they suffered in Canada’s Catholic-run residential schools from the late 1800s until as late as 1990.

Though church collaboration with governments in running residential or boarding schools did not last as long in the United States as in Canada, churches south of the border — including Mennonite ones — also face the legacy of their own mission efforts. Rather than sharing the Christian message as an uncoerced invitation consistent with host cultures, too often churches have joined in colonializing efforts to assimilate native peoples and strip children of their cultures and languages. Furthermore, Mennonites whose ancestors immigrated to the U.S. and Canada have begun to grapple with the fact that policies of Indian removal made possible their very presence on the continent, even if those ancestors participated unwittingly.

Introducing these challenges, Sister Pat Kennedy of Saint Benedict’s Monastery and Jaime Arsenault, tribal historic preservation officer for the White Earth Nation in northern Minnesota, shared the story of their communities’ collaborative project to reckon with their history. From 1878-1945 the Sisters of Saint Benedict operated schools on three sites, including the monastery itself, along with the White Earth and Red Lake Reservations. The Sisters have officially apologized for their complicity in the boarding school program, but Kennedy and Arsenault both insisted this can only be a beginning.

“My work on historical preservation for White Earth is future-oriented,” noted Arsenault, while Kennedy underscored that her community must now work to build relationships of trust with White Earth and Red Lake. Sharing long-forgotten documents and photos from monastic archives offers one opportunity for healing to Indigenous descendants. Artifacts are still being discovered among the archives, and, even if they were originally given to the community as gifts, the community is working with Arsenault to return them to families and communities where they will be treasured far more for their material and spiritual connection with ancestors.

Boarding schools and forced assimilation were part of a much larger set of policies aiming to strip Indigenous communities not only of their culture, Arsenault said, but of their resource-rich lands. In the following session, Jim Bear Jacobs of the Stockbridge-Munsee Mohican Nation stated the implication bluntly: “For white congregations there is no pain-free path forward in this. Reconciliation will cost you something. It should cost you something because it cost me everything.”

In what may be the most revolutionary text in the New Testament, Jacobs said, Jesus told his followers that making repair when someone has a grievance against them is even more important than “bringing your gift to the altar” in worship (Matt. 5:23-24). Jacobs called on every congregation in every denomination that was complicit in boarding schools “at the very least” to “commit a significant amount of your church budget to Indigenous language- and cultural-reclamation projects,” not simply as charity but as something “you wrestle with at every quarterly business meeting” just like salary obligations and light bills.

Jacobs also called on congregations and parishes to assess the stories that their buildings tell through their iconography, flags, symbols, stained-glass windows and especially their portrayals of Jesus. “Does he look like a good old-fashioned Swede? Or might I find a Jesus with brown skin?”

Jacob’s challenge was paired with a presentation by Jeremy Bergen of Conrad Grebel University College in Ontario in a session that asked, “How Does a Tradition Repent?” With expertise on the theology of church apologies, Bergen is regularly called upon to comment on the residential-school scandal in Canada and the Catholic Church’s response. But he also notes ways that the stories of his Mennonite ancestors’ flight as refugees from war and persecution in Europe has long blinded Mennonites to the realities and histories of the Indigenous people whose ancestral lands they settled.

That churches have begun to make official apologies — both to one another for past persecutions and mutual recrimination, as well as to the descendants of enslaved and displaced peoples — is a noteworthy historical development and a sign of the Holy Spirit’s work, but is not sufficient, Bergen said.

Tests of whether apologies are authentic and appropriate include: Are they vague, or do they confess specific sins? Do they use a request for forgiveness as a way to control relationships, or do they invite those receiving the apology to move toward reconciliation at their own pace, on their own terms? Do they merely seek to alleviate a sense of guilt, or do they contribute to a longer process of action and repair?

Perhaps the hardest task of repair for white settlers and their descendants is to return stolen land or the resources Indigenous communities need to recover land.

“It may be unrealistic to return all the land,” John Stoesz said in a final session on the topic of repairing the legacy of harm to indigenous peoples, “but it is unjust to return none.”

Erica Littlewolf, Indigenous Visioning Circle Program coordinator for Mennonite Central Committee Central States and a member of the Northern Cheyenne Nation, elaborated on that legacy of harm and injustice. The Doctrine of Discovery by which Europeans rationalized their displacement of Indigenous people from the American continents can seem “cerebral” at first, but its consequences continue to impact her people and their sense of identity.

“If you fail to see the roots of social ills, you will always blame the oppressed for their oppression,” she said.

Repairing 500-year wrongs may seem daunting, but as an advocate for land recovery, Stoesz has practiced what he preaches. When his family sold its farm near Mountain Lake, Minn., he turned over half of his share in the proceeds to the Makoce Ikikupe organization, which seeks to reconnect Dakota people to the homeland from which they were expelled in Minnesota in the 19th century. His personal story and his elaboration of the work Makoce Ikikupe is doing to return Dakota land, revitalize Dakota culture and renew the natural environment, underscored that the work of repair really is possible.

More than possible, the work of repair is joyful when it is grounded in deepening friendship, suggested various speakers. Speaking warmly of her relationships with the Sisters of St. Benedict, to whom she often brings wild rice or sunflowers, Arsenault told of her hope to return a hundred-plus-year-old pair of moccasins with a floral design to a family she knows in the White Earth community.

“No matter how difficult things get, there will be moments like that peppered throughout this experience, I guarantee you,” she said. “How interesting that I brought flowers to the sisters to bring joy and that flowers might return to equally bring joy back.”

Whether “reconciliation” is the right word for this work was a question some speakers took up, since Indigenous people see no time of right relationship between their ancestors and Europeans in the past to which they can return. When those who have benefited from past wrongs are willing to live with their discomfort, relinquish their need for control and do what they can to repair past wrongs in tangible ways, however, new and deeper relationship can bring healing for all.

Friendship itself may help us navigate a crossroads. Bracketing the Bridgefolk conference were two sessions commemorating the movement’s history and anticipating further work, and yet key themes and lessons carried through. The progress that Catholics and Mennonites in Bridgefolk have made by “proceeding through friendship,” noted Bridgefolk co-founder Marlene Kropf, may seem slow, but is real.

Even when our unity is incomplete, noted Bridgefolk co-chair Abbot John Klassen, new rituals like annual hymn sings and footwashing celebrate our work and relationships so far. Surely, they agreed, these Bridgefolk gifts have something to offer to other dialogues and processes of healing.