In The Good War That Wasn’t — And Why It Matters: World War II’s Moral Legacy, Ted Grimsrud attempts to prove that American involvement in the war was unnecessary and unjust, that tactics employed were fraught with excess and unworthy of being called “good” and that the “good war” myth has helped to justify further excesses in the decades since. Although Grimsrud makes a case that the “good war” was anything but, his lack of primary sources and his problematic, even ahistorical account of World War II will likely limit reception to those already of his persuasion. 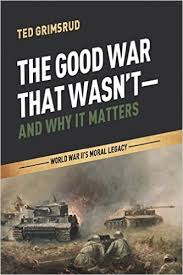 Grimsrud argues World War II was unnecessary. Although Japan and Germany declared war first, he asserts that prior American actions, including sanctions and embargoes against Japan and material aid to China and Britain, had already compromised neutrality. The Japanese decision to bomb Pearl Harbor was a natural escalation of colonial rivalry between Japan and the U.S., Grimsrud argues, neither portending invasion nor justifying the U.S. going to war.

Grimsrud postulates the United States was militarizing before Pearl Harbor, with Pentagon construction and the Manhattan Project under way. As early as Germany’s invasion of Poland, Grimsrud accuses Roosevelt of posturing for war in Europe. He argues Britain’s motives in supporting Poland were prestige and empire, rather than security. He condemns a Royal Air Force decision in July 1941 and subsequent allied decisions to disregard civilian life in bombing campaigns, which led to humanitarian disasters such as Dresden, Hamburg, Hiroshima and Nagasaki, each claiming thousands of civilian casualties. One cannot call this “good.”

However, numerous holes in his discussion of the developing conflict confound Grimsrud’s case and tend toward creating false equivalency between Axis and Allied leadership.

For example, his timeline leading to Germany’s invasion of Poland excludes the Sudeten Crisis and the invasion of Czechoslovakia, a clear demonstration that Hitler’s word could not be trusted regarding territorial ambitions. Regarding Poland’s response to Hitler’s demands that it cede Danzig and the Polish Corridor, Grimsrud makes an extraordinary assessment: “The Polish government refused . . . setting the stage for violence to come.” The implications are: 1) Hitler would have been content with Danzig and the corridor; and 2) Poland brought Germany’s attack upon itself in refusing Hitler’s demands. Primary documents overwhelmingly disprove the former; the latter is blaming the victim.

Germany’s bombing campaigns over England targeted civilians. Grimsrud portrays them as a holding pattern before Germany’s invasion of the Soviet Union in June 1941, which does not convey their carnage. Deadly campaigns over Coventry and London in spring played into the RAF’s decisions in July. German air raids and missile attacks terrorized British civilians throughout the war. Historians have argued that the RAF’s decision was reciprocal to Germany’s demonstration that indiscriminate warfare was fair game. Grimsrud’s book lacks the thorough analysis needed for a convincing counter to this quid pro quo argument.

It is impossible to think of Nazi Germany without the Holocaust. Grimsrud argues convincingly that it played no specific role in American entry into the war or in its military tactics. He makes the point that, prior to the war, the U.S. had the opportunity to provide refuge to hundreds of thousands of Jews through easing migration restrictions, but American antisemitism and economic concerns made this impossible.

Grimsrud touches on uncomfortable truths of an era when racism, antisemitism and xenophobia characterized American life. Legal segregation was at its height. Not only were Americans generally unconcerned about German persecution of Jews, but antisemitic conspiracy theories were so pervasive that newspapers feared discussing persecution at all, lest they be accused of inciting Americans to war against Germany on Jews’ behalf. Bigoted attitudes against Japanese-Americans permitted the U.S. to intern them. Greater exploration into these issues and some primary sources could yield compelling arguments.

However, Grimsrud makes some inaccurate assertions that derail his case. He claims the U.S. declaration of war precipitated Germany’s decision to exterminate Jews instead of deport them. Second, he claims allied pursuit of unconditional surrender, decided at the Casablanca Conference in 1943, worsened the Holocaust. Both arguments cast blame where it does not belong, ignore the nature of the National Socialist regime and disregard the timeline.

Mass murder began with Aktion T4 in 1939 and intensified with the use of Einsatz Gruppen during Operation Barbarossa in June 1941. The SS had Auschwitz II (Birkenau) and the extermination camp Bełzec under construction and the extermination centers of Operation Reinhardt ordered by October. Kulmhof/ Chełmno began exterminating Jews Dec. 8. American entry was Dec. 11. Grimsrud admits the unviability of his latter argument — Nazi leadership was prepared to torch Germany before negotiating surrender — even as he continues to pursue it. Even a negotiated surrender could not have prevented the murder of millions.

The second half of the book focuses on the postwar years. The Truman doctrine’s total opposition to communism ignored regional nuances, dooming the U.S. to conflicts in Korea and Vietnam and unhealthy relations with Cuba. Grimsrud laments that the tactics of total war, indiscriminate aerial bombardment and targeting of civilians worsened with each conflict, while the military industrial complex brought us to the brink of nuclear war. In the case of Vietnam, the “good war” legacy led presidents Johnson and Nixon to prolong and expand a poorly chosen engagement because losing was inconceivable.

Although his discussion of the Cold War seems compelling, Grimsrud’s problematic account of World War II leaves the reader uncertain the argument can be trusted. This is unfortunate. At a time when we imagine the U.S. to be the global arbiter of justice and freedom; when we demonize our enemies and rationalize their eradication, even reclassifying civilian dead as militants; the need for an alternative understanding is clear. However, an effective case must be adequately sourced, unassailable in evidence and its arguments narrowly targeted. Bending facts and history to fit a pacifist narrative is counterproductive.

James Regier is a historian living in St. Louis, where he works for Mennonite Peace Center.