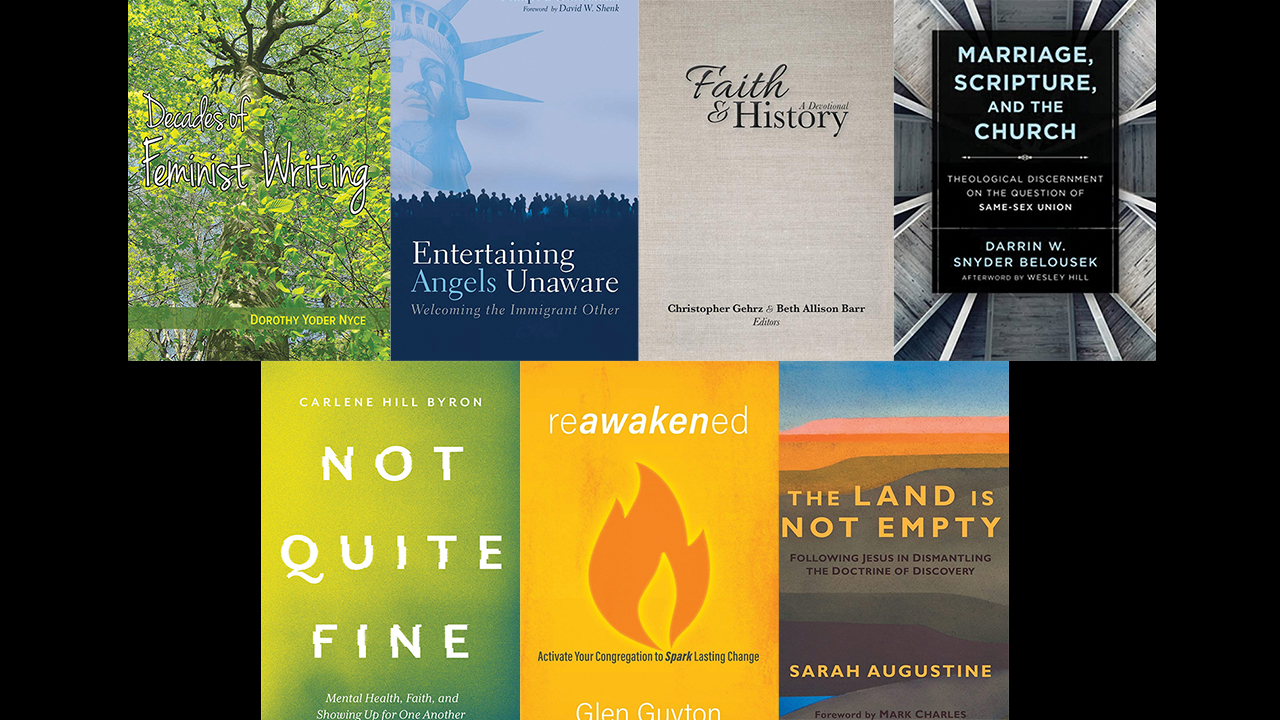 The Oct. 29 issue of Anabaptist World included several mini reviews of recent books. Some of them are books about church life.

In Decades of Feminist Writing, Dorothy Yoder Nyce, a retired college and seminary professor, offers a wide-ranging collection of writings drawn from a career in academia and congregational ministry. Ranging from a critique of traditional teachings about gender based on Genesis 1-3, to observations about male power asserted through “Bible, bishops and bombs,” to historical studies of women in early Anabaptism and the emergence of 20th-century Mennonite feminism, Yoder Nyce contributes a strong Anabaptist voice to the story of women shaping religious history and sacred thought. She dedicates the book “to all women who research into Scripture, history or theology in order to better promote worth for those who are disadvantaged by patriarchy.” — Paul Schrag

Do we really see who’s at our door? Or do we see who we expect to see? Eastern Mennonite Missions worker Philip Gottschalk believes there’s a war going on about perceptions of immigrants and refugees. In Entertaining Angels Unaware: Welcoming the Immigrant Other (Cascade), he challenges those perceptions and presents a Christian response to immigration. A professor at Tyndale Theological Seminary in the Netherlands, Gottschalk has lived in the former Yugoslavia, Austria and Belgium, where he had experiences with refugees. “The biggest misconception I see is that immigrants and refugees are dangerous and will become terrorists or that they want to flood Western countries and eventually take over,” Gottschalk says. “Most immigrants and refugees are fleeing war and abuse. Most, including Muslims, hate extremists like ISIS. Many have lost their homes, their cities and their relatives to extremists. Immigrants and refugees are looking for safety and a future.” — Eastern Mennonite Missions

Faith and History: A Devotional (Baylor University), edited by Christopher Getz and Beth Allison Barr, includes 47 three-page devotionals based on biblical texts, written by over 40 Christian historians, about 40% of them women. One, Darin D. Lenz, teaches at Fresno Pacific University. The writers point out the importance of studying history, which, as Karen Johnson writes, “can loosen the reins of the tyranny of the present, and of the tyranny of our own geographical, socioeconomic and even ecclesial contexts. By encountering the strangeness of the past and of others, we can see more clearly.” They demonstrate this by drawing on stories of figures in Christian history, some of whom I’d never heard of, such as M. Madeline Southard, Levi Coffin, Mary Lyon and John N. Mars. They also address issues such as racial and economic injustice. Each devotional includes questions for reflection, texts for further study and a prayer. This is a rich resource, particularly for preachers. — Gordon Houser

Mennonite theologian Darrin W. Snyder Belousek presents a biblical-traditional theology of marriage in Marriage, Scripture and the Church: Theological Discernment on the Question of Same-Sex Union (Baker). He was prompted to write the book by developments in Mennonite Church USA, in which acceptance of same-sex marriage has increased. Affirming a traditional view of marriage while engaging charitably yet critically with other views, Snyder Belousek approaches the topic from a different angle. He observes that the biblical debate has centered on what Scripture forbids in several specific texts. He believes this approach is inadequate because it divorces the question of same-sex unions from other matters of sexual ethics. He places the question within the broader context of the meaning of marriage as defined in Scripture and as traditionally understood in Christian history. — Paul Schrag

Medicine and therapy are important tools in addressing mental health problems. The church can also be a strong support. Not Quite Fine: Mental Health, Faith and Showing Up for One Another (Herald) by Carlene Hill Byron offers practical ways the church can promote healthier mental states for everyone. This is increasingly important, as the Centers for Disease Control and Prevention suggests half of all Americans will be diagnosable with a mental illness in their lifetime. Byron is a teacher and lay counselor who has been medically treated for depression or bipolar disorder since the age of 19 and is active in her Lutheran church. She writes that the assurance she is fully accepted by God has been essential to her survival as a person with a bipolar diagnosis. This happens in a congre­ga­tional setting when people connect to purpose, value and hope as part of God’s family. — Tim Huber

Reawakened: Activate Your Congregation to Spark Lasting Change (Herald) by Glen Guyton is geared to church leaders, but anyone interested in making the church more effective and relevant can benefit from it. Guyton, executive director of Mennonite Church USA, notes that “our culture is becoming increasingly skeptical of re­ligious leaders and institutions, leaving churches increasingly marginalized and isolated from the center of community life.” To counter this, he presents char­acteristics of an “activated church”: 1) know your identity and show your identity; 2) mission-focused spirituality; 3) intentional discipleship and faith formation strategy; 4) intentional diversity and inclusion; 5) holistic witness to serving the community; 6) developing strategic partnerships; 7) practicing sound stewardship; and 8) strategic leadership development. The book comes out of interviews with church leaders who demonstrate these characteristics. Each chapter comes with reflection questions, making this a good book for Sunday school or small group discussion. — Gordon Houser

The Land Is Not Empty: Following Jesus in Dismantling the Doctrine of Discovery (Herald) by Sarah Augustine provides a prophetic critique of the the­o­logical, philo­sophical and legal framework dating from the 15th century that “gave Christian governments moral and legal right to invade Indigenous lands and dominate Indigenous Peoples” by claiming that such lands were devoid of human beings — empty. This doctrine has been upheld through two U.S. Supreme Court rulings, the latest in 2005. Her argument is not only supported academically but is personal as she recounts her own story and the stories of others, including the Wayana people of Suriname. The devastating exploitation of people and resources is bad enough, but that it is done in the name of Christ is scandalous. She writes, “I will make you uncomfortable.” We need to be. — Gordon Houser