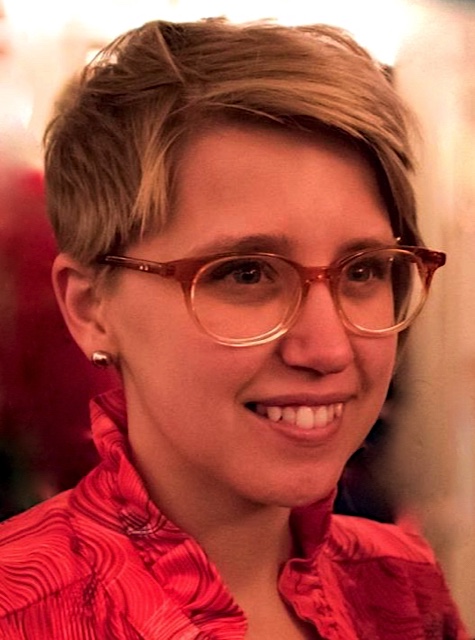 Annabeth Roeschley lives in Washington, D.C., and is a member of Hyattsville (Maryland) Mennonite Church. Annabeth is a Pink Menno leader and served on the Design/Theme team for the Future Church Summit in Orlando 2017.

There are lots of great things being written in response to our Menno-time together in Orlando. There is much to say. In this piece, I want to look at Orlando ‘17 specifically through a lens of power and unpack how I witnessed decision-making occur at convention. I reflect as a queer, cisgender, white, settler, able-bodied person and a member of the Future Church Summit Design/Theme Team. In this analysis I speak for myself, and not on behalf of this team.

The Future Church Summit (FCS) was an exercise in doing better process. We sought to create a framework for convening that would allow us to be together in ways that caused less pain and enacted less violence than in previous conventions, particularly at Kansas City. At least, this was the personal bar I set for FCS, a bar which, by those standards, was set pretty low. I had a lot of anxiety going into FCS.

Overall, FCS exceeded my expectations. It seemed that many participants were having a positive, even transformative time. Through the FCS Design Team’s connections to various communities within MC USA, additional people were drawn in whose voices have been underrepresented in the Delegate Assembly; in some cases, voices that have been explicitly excluded in years past.

Yet this process was imperfect. Among other things, we left out important histories in our timeline of MC USA, and we were still overwhelmingly white and older. However FCS was closer to a more representative body and equitable process than Mennonites have managed in past assemblies.

Essentially, the Future Church Summit was a de-centering of identities that have historically been privileged over and against others (white, male, straight, cis-gender, settler and the list could go on).This de-centering moves to center the lives and experiences of people of color, people who are women, people indigenous to the land we are on, people who are queer and/or transgender.

This means ending the violence of racism, colonialism, and heterosexim and transforming systems and practices that support such violence. This fundamentally means a redistribution of power.

FCS was so, so far from doing this right or doing it fully, and it was an attempt in this direction. People who were/are marginalized were in the delegate hall as part of the Summit, sometimes as a boldly visible community, and sometimes alone, “representing the unrepresented,” as Isaac Villegas, another FCS Design Team member, wrote.

All of this we saw challenged in the final Delegate Assembly when those who were uncomfortable with this movement re-exerted themselves and re-centered heteronormative white, male power. Sloppy proceduralism allowed this to manifest. Assembly leaders assumed consent of the delegate body and fostered a decision into being. Specifically, the moderator, Patricia Shelly, and the chair of the resolutions committee, Samuel Voth Schrag, perhaps with fine intentions, did not question what enabled their sense of agency over last-minute delegate decisions. They may have intended to pass something in support of FCS rather than nothing. They may have been acting in good faith to respond to numerous voices they were hearing, suggesting edits. But what voices were they not hearing?

In the swiftness of that session, as many delegates sat confused, how were our leaders to know what they could not hear? Suddenly the institutional weight and impact of the Future Church Summit was altered in the form of a resolution passed by the delegates. It goes from being a directive to serving as a document to be used for that most favorite of Mennonite processes: discernment.

We’re Mennonites; we’d likely finagle with any language in a resolution and we are inclined to treat them more as guides than directives anyways. This is what it means to be more “discerning” than “doctrinal.” Denominational resolutions only have so much weight anyways!

MC USA Executive Board members, this is what it looks like to bless a representative process, FCS, and then undermine it.

The undermining, in hindsight, seemed to begin early on. A desire for this resolution originated from our FCS Design Team as one way (of several) to empower the outcomes of FCS. In our formal way of operating as MC USA, resolutions are the way to do this, particularly in directing the work of our Executive Board. We did not wish to invite our communities into yet another process only to have it go nowhere. We sought to be clear and transparent and agreed that this resolution, which was basically a vote of affirmation for the visioning work of the Summit, should be known in advance to all FCS participants, including delegates.

However, it seems as though the existence of the proposed resolution was kept quiet by the Executive Board in the weeks leading up to convention, despite the Design Team’s intentions. The undermining continued just hours before the Summit’s opening night. FCS Design Team members discovered that moderator Patricia Shelly was resistant to sharing the resolution in the presentation she and Executive Director Ervin Stutzman were using to introduce and frame the Summit. Members of our FCS Design Team had to strongly advocate that the resolution text be read aloud, as per our agreed upon plan.

Again, I am focusing less on what was said, but how it happened. The manner in which this resolution was altered and approved reflects a system that privileges insiders, and one that, especially in moments of chaos, falls back on business as usual.

This is what it looks like to allow six months of leadership by a diverse FCS Design Team and two days of work by over 700 Mennonite constituents–who gave the FCS outcomes an 85 percent vote of confidence–to be changed, in an abrupt end, by a handful of people with power.

It’s astonishing to me to hear that some of these delegates able to alter the course of the final delegate session did not feel empowered to speak into the plenary sessions of the Future Church Summit of which they were a part. That some did not feel “safe” even. Where was their power, then? What was it about having fewer black, brown, indigenous, queer and younger bodies in the room and in charge that suddenly made it possible to speak up at the end? What is it about de-centering power structures that feels unsafe? Is “unsafe” a mask for discomfort? Or anxiety? Can we acknowledge for a moment the sheer amount of vulnerability and courage that it takes sometimes for people who are not straight, white and male to simply just show up in these church spaces?

***Except, MC USA, you can’t take back what is not given to you.

There is power at play that is not yours. There are fruits of the Future Church Summit that will not be amended by a misguided delegate session. There are FCS themes that shine for themselves. There is power as a force of love, justice and liberation and an FCS body empowered to enact it. There is the power of marginalized people in the Mennonite church intersecting, finding liberation together, befriending each other.

There is the power of difference and respect found on our FCS Theme Team as we “wrassled” (to use a favorite word of team member Chantelle Todman Moore) with one another and with the ideas from the FCS tables. There is the power of mutual care and support as we offered our vulnerable selves to this process. There are the bonds of trust and accountability, that you, the FCS body, extended to and affirmed in us as your discerning Theme Team. There is grassroots power here to be mobilized.

I hope, cautiously, that as we move forward we learn both from the gifts of the Future Church Summit and from its mistakes. Let us learn from the Summit’s model of power-sharing and representative process in stark contrast to a conventional wielding of power and procedure in the Delegate Assembly. Perhaps, when we look back, the Future Church Summit will not just be a footnote in our denominational story but a real turning point at which institutional power and polity truly shift. If so, we will operate more justly. We will convene ourselves more equitably.

If and until then, there is more to be done than can wait on institutional change. Beloved friends, the wacky, holy way of the gospel is ours. The one who calls us to love, resistance, and collective liberation is faithful. And, blessed by the Spirit, we have the power to make it so.