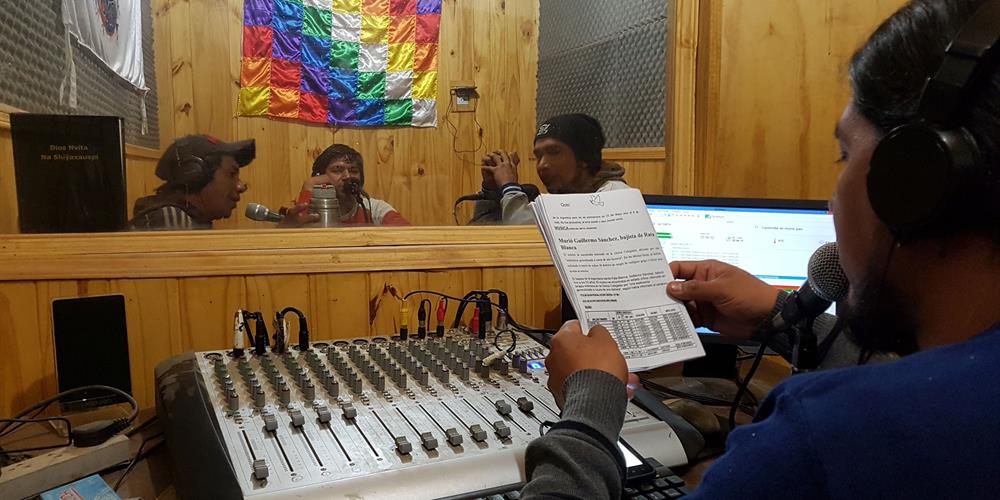 It’s where the Indigenous Toba Qom man brings the warmth of Scripture to listeners in the Chaco who look forward to hearing the hope of God in their language.

Created in 2010, the radio station brings spiritual input, health education and up-to-date news to its Indigenous listeners in some 14 villages, says José Oyanguren. He serves with his wife, Alfonsina, and their family, who have been sent as missionaries to the Chaco by the Bragado Mennonite Church in central Argentina, together with Mennonite Mission Network, where they serve as mission associates. Two Ohio churches, Pike Mennonite and Sonnenberg Mennonite, also partner in this ministry.

Indigenous communities in this part of the Chaco had been underserved by radio communication before Saỹaten began producing programs, which now run for 14 hours a day, seven days a week, Oyanguren says. Previously, the only other radio station in Castelli provided just an hour a week for cost-prohibitive Toba Qom programming.

Pérez provides two hours of the daily programming for a captive audience as he reads from biblical texts, shares news from neighbors and congregations, and conducts live conversations on the air.

“I really like doing a program; all the brothers and sisters listen to me,” Pérez said during a recent interview in early October at the station. “I am happy to be there. I will never leave the radio.”

The people who go to the radio station to do their programs have hope, Oyanguren said during that same interview. “They come smiling and bring an attitude of hope,” he said. “If it is cold, Vicente Pérez still comes. It rains and he arrives with his boots on. If he didn’t have hope, he would not come.”

Hearing hope in many forms

A sign of hope is that the people feel encouraged to speak of the word of God, Oyanguren said. Ninety percent of the programming is Bible-based in some way and includes news and inspiration from the life of the Indigenous churches. Toba Qom programs share stories, worship songs, Psalms and other texts from the Bible as well as many other forms of hope for which the indigenous community is grateful.

“The gospel generates this strength and encouragement for the Indigenous people” in the midst of many adversities, Oyanguren said. “We receive calls for people in the hospital. People call to get help on the radio, to raise funds. They have a problem and come to communicate via the radio. People feel moved with compassion. They share information about deaths, too, so people know and can go be present with the family.”

People in Indigenous communities from as far away as 40 kilometers (25 miles) go to great lengths to hear this hope, Oyanguren said. These listeners run a wire to a tree and attach an antenna to the wire. “Clearly, [this radio] station is something the people want,” he said. “In this zone, people get up and turn on the radio. There are no daily newspapers, so people learn what is happening by listening to the radio.” (The Internet does not give them local news.)

Many local connections are made that would not be made otherwise, Oyanguren said. For example, if someone has an ill family member and needs to travel, they get on the radio and tell their story.

“Within a day or two, they have enough money for the trip, because people come to the radio station and donate,” Oyanguren said.

Another connection includes addressing the violence and discrimination suffered by Indigenous people. A young woman provides a weekly program of local, regional and national news that affects the Indigenous community such as providing listeners with information on land justice and human rights efforts. One case discussed on a broadcast involved the state selling land that was part of an Indigenous reserve in Miraflores. The radio broadcasts reach about 8,000 in Miraflores. The Indigenous people went and took the land back.

In 2015, some of the Indigenous youth in Castelli offered to help run the station, which needs continual staffing while broadcasting, Oyanguren said. For two years, the youth worked for free. And then in 2017, a decision was made to charge a fee to churches, local hospitals and institutions for their programming, and then use these funds for a small stipend for the youth running the station.

The youth have even held fundraisers for new equipment such as earphones. “They got the firewood to cook food that they sold for 100 pesos per container,” Oyanguren said.

In addition to creative local fundraising and partnerships, financial support from Mennonite Mission Network, the Ohio church partners and grants from the Kansas-based Schowalter Foundation have provided resources to help develop Saỹaten.

“We are building a larger recording studio that also provides music for the radio … because God has blessed us with response from the people,” Oyanguren said. “Almost no other institution that I know about gives the Indigenous people autonomy…. Many times, there is still non-Indigenous supervision… This work gives me hope for the sustainability of future projects generated and run by Indigenous people.”