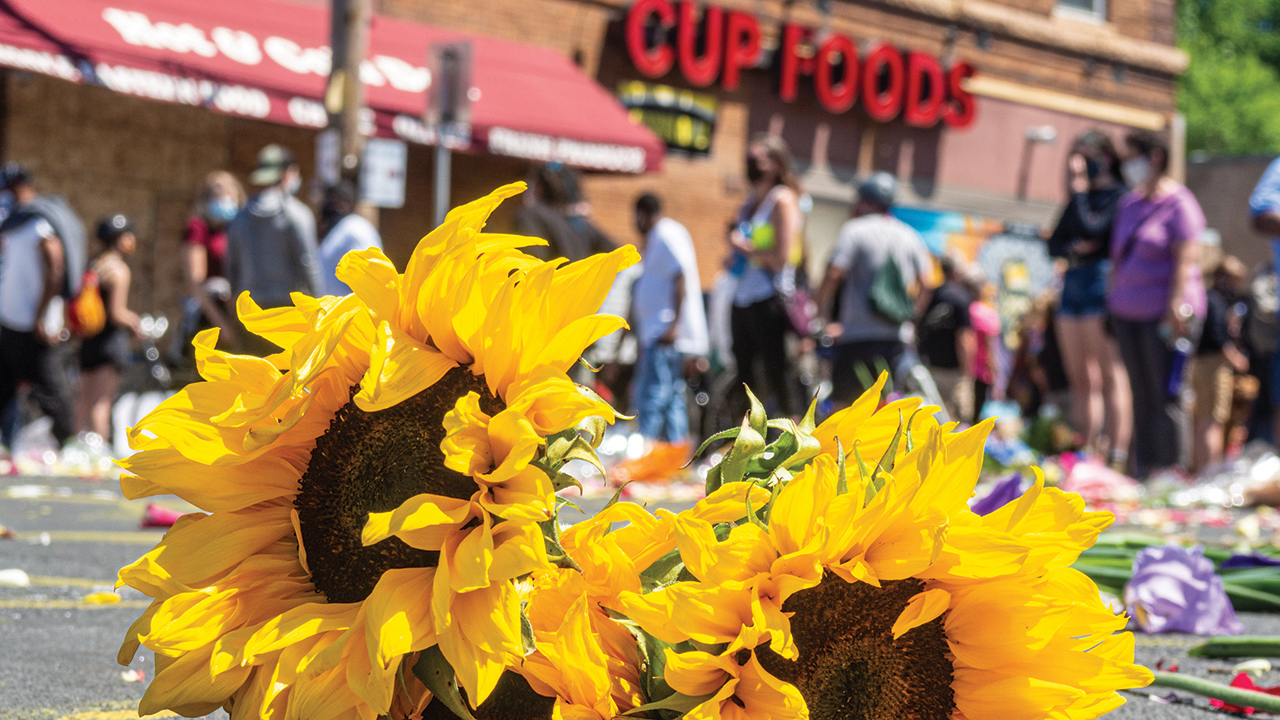 Flowers grace the memorial on May 30, 2020, where George Floyd died in Minneapolis. — Karla Hovde

Since I am now fully vaccinated, I have returned to riding the bus downtown to the Minneapolis hospital where I work. As a white person, I am in the minority on this bus ride. This leads me to reflect on life in Minneapolis for people of color.

Before May 2020, Minnesota was considered a bastion of progressive politics and policy, a place of prosperity, with an excellent quality of life. The people who ride the bus with me likely don’t live within that vision of our state. They experience, on average, a shorter life expectancy than white Minnesotans, unequal access to a good education, lifelong health disparities and, yes, many more negative interactions with law enforcement.

Often these incidents are due to over-policing. Many cause lasting harm. Some are fatal.

I think also of the once-thriving immigrant businesses that I pass, some shuttered, some with “open” signs scrawled on the plywood covering the windows, a few burned to the ground. I take in the always-being-evicted tent cities that appear overnight in vacant lots and even on sidewalks. The wounds that were here all along, when our city looked cleaner and more prosperous, are gaping and bleeding before us all now. They are part of our city and state’s broken promises of equity, opportunity and basic fairness.

Yet Minneapolis’ people of color are, despite these adversities, often much more resilient than I know how to be.

The Derek Chauvin verdict was a relief — even a joyful, triumphant relief — albeit for a short time. Black Minnesotans, especially, danced in the streets downtown and at George Floyd Square, shared food with the neighborhood and chanted a resolve to seek justice for police killings, which seem to happen all the time, here and elsewhere. Other people of color and white residents joined them.

Weepy and overcome, I listened from my garden at home. I heard fireworks and honking. I saw smiling faces as people walked by toward East 38th Street.

It was a triumph. The outcome — guilty on all charges — would likely not have happened if not for the brave teen girl who dared to record the murder despite threats from the police. It may well also not have happened — or would have resulted in a slap on the wrist — if not for the relentless, Black-led protest movement. Mostly, it’s the people who enjoy the least of Minnesota’s privileges who are leading this work.

It was a relief, but I worry that we tend to be relieved about the wrong things. While most of us worried for our city and for the many small businesses already struggling to rebuild or survive, we should not be relieved that we were spared Black despair and rage. We should be primarily relieved that for once there was a real consequence for the murderous violence far too often inflicted on Black bodies.

This, however, is not real justice. Justice would be no more lives like Floyd’s snuffed out through extrajudicial murders by police. No more tyranny of mostly white police officers over neighborhoods full of Black and brown Minnesotans. No more officers like Chauvin continuing to work in policing despite many serious complaints. No more pulling people over on “pretext stops” over air fresheners or expired license-plate tabs.

Ultimately, justice would be a reimagining of what public safety looks like, a commitment to de-escalation and peaceful encounters and not expecting armed officers to respond to every type of urgent need.

For real justice, people like me need to share power and opportunity in every sphere of our lives and play a supportive role in a more inclusive vision of what we are now and what we could be.

Minke Sundseth attends Faith Mennonite Church in Minneapolis and lives near where Derek Chauvin killed George Floyd on May 25, 2020.