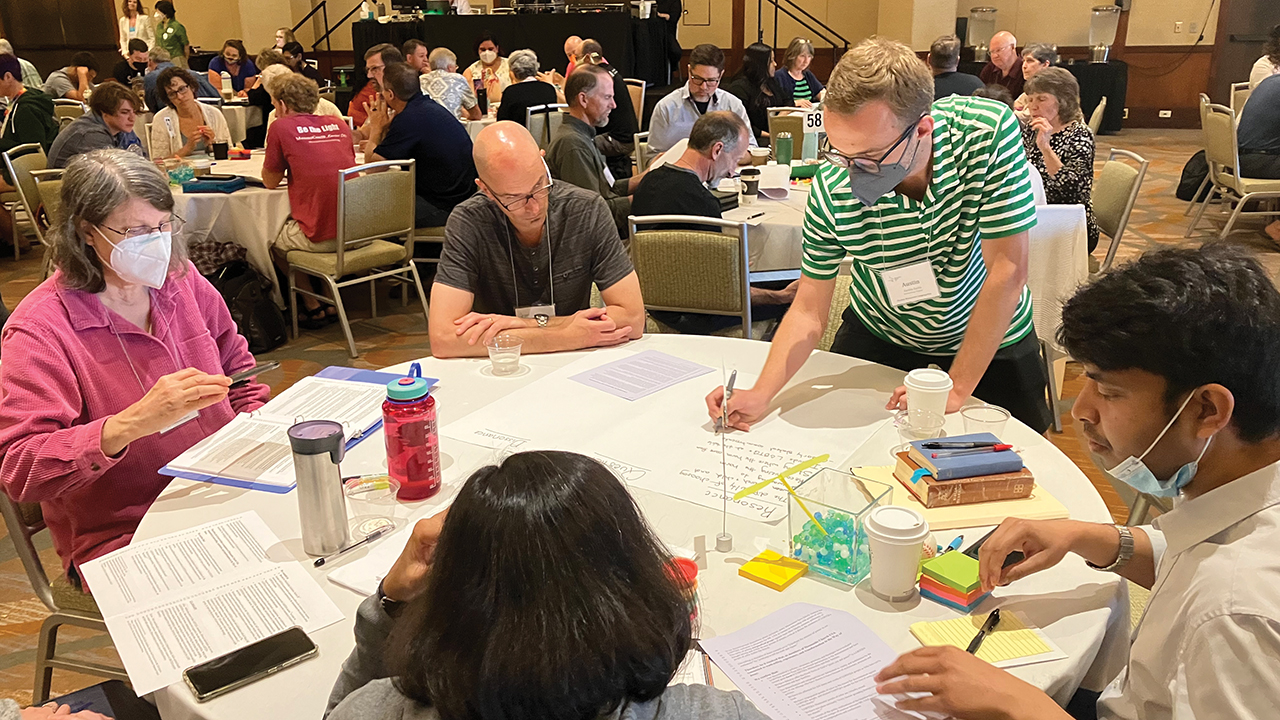 Delegates work during the special session of the Mennonite Church USA delegate assembly May 27-30 in Kansas City, Mo. — Paul Schrag/AW

Passage of the “Repentance and Transformation” resolution was an LGBTQ-affirming action no one imagined 20 years ago. Two dec­ades marks a relevant span, because that is the age of Mennonite Church USA and its Membership Guidelines, which delegates repealed at a special assembly May 27-30 in Kansas City, Mo.

But one could just as well draw a contrast between today’s increasing LGBTQ acceptance and attitudes from earlier points in time. One delegate cited a memory from 39 years ago.

There she watched as her father, David Dutcher, staffed the table of the Brethren Mennonite Council, an LGBTQ advocacy group. She observed church leaders and other conference attendees admonish him “in loud, stern tones.” Later, she learned that some of those leaders had gay or lesbian children. At assemblies in later years, LGBTQ advocate displays were barred from convention sites.

“I’m here today because my gay dad and my straight mom taught me to love the church,” Dutchersmith said in an interview after telling the story during a delegate discussion. “My dad kept showing up and testifying to his faith and his hope for change. He is an inspiration for me to keep showing up.”

David Dutcher died in 1989. But the hope and persistence he modeled have borne fruit. Today, LGBTQ Mennonites have gained a degree of acceptance he could not have imagined. On May 29, MC USA delegates validated that acceptance with a resolution that included confession of past harmful actions, like those Dutchersmith observed as a teenager in 1983.

Affirming LGBTQ people in an official church statement may come with a price: the loss of more conservative congregations. This would be one more Mennonite contribution to the sorting of North American Christians into liberal and conservative camps. Mennonite or Methodist, the trend is the same. We gather with like-minded people. A big-tent church seems like a thing of the past.

Yet we do not lose hope for being a diverse church. It is possible for people who disagree on some issues to find common ground on the most important matters and have a positive influence on each other.

The people of MC USA have shown they are willing to do hard things — like dedicating a holiday weekend to talking about church politics. Staying in fellowship is hard when Christians disagree on an issue that involves sex. Can those who remain in MC USA do this hard thing?

In Kansas City, leaders of predominantly conservative congregations and conferences said the “Repentance and Transformation” resolution would make it more difficult to keep some of their people in the MC USA fold. We hope their unifying efforts succeed. But if they do not, we will bless those who follow their consciences and sense of God’s leading to the place where they fit best on the spectrum of denominations in the Anabaptist-Mennonite tradition.

The fact that “Repentance and Transformation” passed narrowly, with 55.7% support, leaves room to interpret the result a couple of different ways. One conclusion would be that the resolution lacks a strong mandate. Another is that support for LGBTQ affirmation actually is larger than the percentage shows.

Some delegates believed a resolution with bridge-building words of forbearance to those who affirm only traditional marriage would have gained more votes. Randy Spaulding of Boulder, Colo., a member of the Inclusive Pastors group, told me: “Between the 55 and the 82 [the percentage who voted to ‘retire’ the Membership Guidelines] is a group of people who support LGBTQ inclusion but struggled with the challenging nature of the [‘Repentance and Transformation’] resolution.”

He was right that votes and percentages don’t tell the whole story. The most important story is the one we tell every day in our lives and our faith communities.

For years, for lifetimes, LGBTQ Mennonites like David Dutcher were treated as outcasts or hid their identity. It is good for MC USA to say officially that the future shall be better than the past.