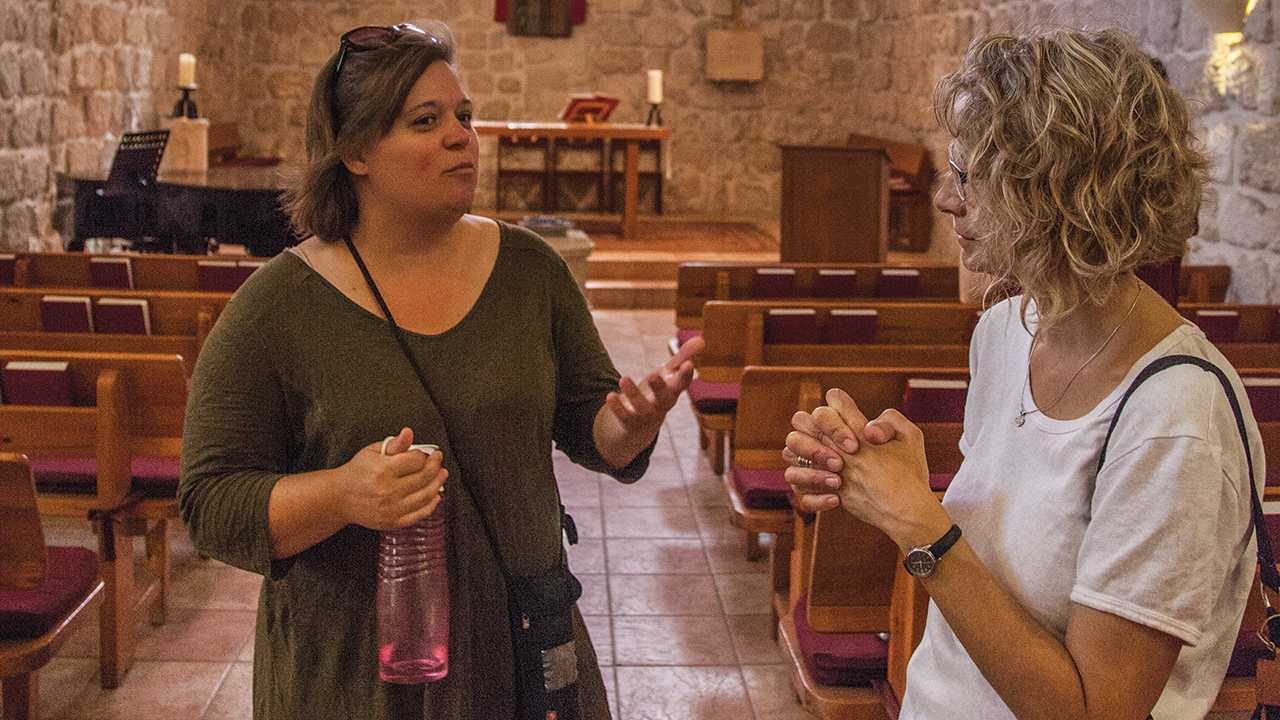 Amy Yoder McGloughlin talks with a member of Redeemer Lutheran Church in Jerusalem after their English-speaking worship service on Aug. 16, 2015. — Lowell Brown

Whose side are Anabaptists on in the conflict between Israelis and Palestinians? As Christian peacemakers, we stand with both sides and against all oppression and prejudice.

The urgency of building Arab-­Jewish peace drew the world’s attention last month. Nearly two weeks of violence claimed the lives of at least a dozen people in Israel and hundreds in the Palestinian territory of Gaza. A ­barrage of rocket attacks and a rash of street fighting left both Arabs and Jews shaken.

Despite the recent bloodshed, there are signs of hope in rejection of old ways of thinking among diverse people of faith.

Anabaptists contribute to positive trends by opposing the twin evils of antisemitism and the oppression of Palestinians.

On the political front, two key constituencies — U.S. Jews and evangelical Christians — are beginning to turn away from unqualified support for Israel. Last month, 12 Jewish members of the U.S. House of Representatives condemned the rocket attacks by Hamas against Israeli civilians and also denounced “violence in Jerusalem, including Israeli police violence, which preceded these attacks.”

A corollary to recognizing shared blame is affirming legitimate needs. At the risk of oversimplifying: Israel needs security, the Palestinians dignity, beginning with basic human rights.

Further, both sides need to reject violence, as it fails to achieve their goals. A 2017 Mennonite Church USA resolution on Israel-Palestine observes: “Violence has not been effective for either Palestinians or Israelis and threatens to dehumanize and corrupt both communities.”

Anabaptist activists traditionally have shown solidarity with Palestinians. The 2017 resolution takes a balanced approach, with a strong emphasis on opposing antisemitism. This is especially important as violence against Jews in the United States increased after last month’s clashes in Gaza and Israel.

The 2017 resolution admits participation “in harms against Jewish people,” including “failing to fully examine the historical record of Mennonite complicity in these atrocities” — specifically, the Holocaust.

In our June 18 issue, Alain Epp Weaver reviews a new book, European Mennonites and the Holocaust, which takes a significant step to correct this failure.

The MC USA resolution also confesses “embracing or tolerating Christian Zionist theology, which too often has disregarded the well-being of the Palestinian people.” Christian Zionism advocates the gathering of Jews in Israel, typically as a prerequisite for the Second Coming of Jesus, and asserts that Christians should always support the state of Israel.

Recognizing the role of biblical interpretation in Christian views of the Arab-Jewish conflict, Amy Yoder McGloughlin, a Mennonite pastor whose call to peacemaking has led her to visit Israel-Palestine several times, warns against conflating the modern state of Israel with the people of God in the Old Testament.

In an article in our June 18 issue, she suggests more Bible study on the topic, because our traditional reading of the text “tends to be imbued with Zionist thinking.”

In a positive trend, Zionism may be waning among Christians and Jews alike. According to Religion News Service, younger Jews in the United States are using social media to openly question their relationship to Israel and Zionism.

Writer Marisa Kabas says American Jews like herself “were raised to believe in the infallibility of Israel” but now sympathize with Palestinians as well.

“Why does a safe homeland for us mean the subjugation of another?” she said on Twitter.

A poll shows a similar trend among young U.S. evangelicals. While their elders have been a driving force in U.S. policy backing Israel, evangelicals in the 18-to-29 age group reveal a shift: 42% support neither Israel nor the Palestinians; 24% support the Palestinians; 34% support Israel. A possible reason: movement away from an end-times theology that puts modern Israel at the center of prophetic fulfillment.

As a younger generation shows the way to a more peaceful future, Anabaptists can support Middle East peace initiatives through agencies like Christian Peacemaker Teams (as Amy Yoder McGloughlin does) and Mennonite Central Committee.

A report in our June 18 issue tells of an interfaith peace venture in Lebanon supported by MCC and a local partner. Two Lebanese young women, a Muslim and a Christian, discovered that interacting with people of other religions — a novelty for them — broke barriers of suspicion.

“It’s very weird to have friends from different religions,” said Rayan Dagah, an 18-year-old Muslim. “But this [avoidance] is completely wrong. . . . We should always accept others regardless of our differences.”

How simple. Too simple to solve the problems of the Middle East? In fact, there will be no solution without it.