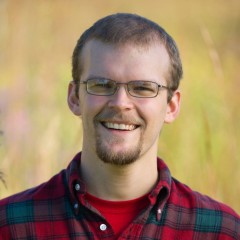 In an effort to highlight the many Anabaptists engaged in important work and ministry across the country and around the world, we’re starting a new series. Each Thursday, we’ll publish a seven question interview with a different Mennonite talking about their life, work, spiritual disciplines and influences.

1. You discovered Anabaptist-Mennonite faith during your undergraduate. Can you share the “cliff notes” (quick) version of that story?

I had become a Christian during my last semester of high school. I had planned for most of my teenage years to join the military (either the Army or the Navy). I had already received two ROTC (Reserve Officers’ Training Corps) scholarships, one through each branch (Army to Truman State University; Navy to Kansas). Not long after becoming a Christian, I learned that I had been given a full academic scholarship to Truman State. An older friend warned me that I might change my mind about the military and that I should, then, take the academic scholarship and “just try” ROTC.

So, I was in the ROTC program, but I hadn’t yet committed to serving as an officer after graduation. During that first year, I read Shane Claiborne’s The Irresistible Revolution. Through Shane’s words, I realized that I couldn’t do both. I couldn’t be a soldier (or a politician) and be a Christian. Shane’s second book mentioned Anabaptists and the Amish. I did some googling, found John Howard Yoder’s books, and I was hooked. At the time, I was dating my now wife, Brenna. This was all new to her, too, but as we were falling for one another, we together fell for the vision of church that we were finding in Shane’s writings, and from Yoder and others. Long story short, here we are.

2. What was it about the Mennonite/Anabaptist faith that drew you in and keeps you here?

At first, it was the pacifism/non-resistance. But as I continued my study of the Bible, I found again and again that the Anabaptists had gotten their ecclesiology right. The picture of God’s people that I got from the Bible (Paul especially) was one of an alternative society:God’s holy, set-apart people distinct from the world. In that, we receive and live out the life that God hopes for humanity and makes possible in Jesus.

This was what the earliest Anabaptists said (I had read Menno Simon’s writings during this time, too). So, I always say that Shane Claiborne, John Howard Yoder, and Menno made me Anabaptist, but Paul kept me here.

Reading about the agrarian heritage of the Mennonite church keeps me excited about being here.

3. You studied (and now teach) at Anabaptist Mennonite Biblical Seminary (AMBS). What interests drew you there? What’s your degree program and area of concentration?

As soon as I became a Christian, there was no question: I was going to be a pastor. So, in my mind, seminary was a no-brainer. I applied to six seminaries, and AMBS was last on my list. I wanted the prestige of Princeton or Duke. When Brenna and I visited AMBS, though, we felt like it was a seminary that would form me as both a disciple and a biblical scholar. Try as I might to end up at a seminary with a bigger name, the Lord’s calling to AMBS was abundantly clear to both of us.

I love the Bible, and I love homesteading/organic farming. I knew that AMBS was the kind of seminary where I/we could cultivate both of those. So, I received my Master of Divinity in Biblical Studies, and now I teach Greek.

4. What communities or mentors have been influential for you? Why or how did they make an impact?

I grew up without really any healthy male mentors, but since college, some really important men have shown me what it means to be a man of God. First was my campus minister in college, Derrick Rohr of Campus Christian Fellowship. I had a lot of stuff to work through, and he walked alongside me with patience.

Second was my pastor at Pulaski Mennonite Church, Darrell Zook. I did and still do look up to him tremendously. He exhibits the kind of pastoral patience, grace and determination that I hope to model.

My wife has also been a patient mentor and friend to me. She grew up Christian, so it took a lot of patience for her to date and eventually marry me. In very many ways, she has taught me to be a Christian.

Lastly, Ben Ollenburger at AMBS has been important to me. He’s taught me to read the Bible patiently and faithfully.

5. How do your beliefs and your faith impact your day-to-day interactions and your teaching style?

I hope that, were you to ask those who know me, folks would say that I am passionate about the Gospel and that it shows in the way that I live my life. Obviously, I mess up all the time (ask my wife!), but I hope that is what you’d hear.

I think about my calling as a minister often, especially when I’m teaching. I’m continually amazed how much my training as a minister is needed in the Greek classroom. I tell my students all the time that I’m not interested in punishing them for not knowing something; I’m interested in helping them to know the wonders of the Greek language in order to become more faithful and committed readers of the Bible.

I think of my life in something like concentric circles of discipleship. The first and most important is how I live my faith in my own home. What kind of a disciple would my wife say that I am? What about my mother, my siblings? Then, I think about my neighborhood. How would my neighbors describe us and our way of life? Our gardens are the primary place I see this take fruit. We often have kids coming to our house to learn about what we’re doing in our yard. We’re known as the gardeners. I think that’s key. Then I think of my larger community. It’s a gift to be a part of a learning community; it’s a gift of God’s grace that I try not to take for granted.

6. If you could dream up anything for the future of Mennonite Church USA, what would it be?

I dream that Mennonite Church USA would rediscover the radical call of the Gospel, a call that extends so far beyond “ethics.” It’s a whole identity that starts first with an orientation of openness to God’s gracious gift of life. Then, prayer and worship. Through these things, we’re formed to be who we (together, as the church) are called to be. I’d love to see us rediscover the ecclesial vision of the earlier Anabaptists that I talked about above. I’d also love to see the church rediscover its agrarian heritage.

7. If someone could only read three more texts (theological texts, Scripture passages, articles, poems, novels, etc.) in their lifetime, what three works would you recommend to them?

These have probably been the most formative texts for me over the past several years.