The authors of this book are friends of mine. I have long admired their commitment to the Christian task of peacemaking and vigorous activism for social justice. In this volume they invite us “to read the Bible the way it was written — as a collection of arguments about life, love and power.” 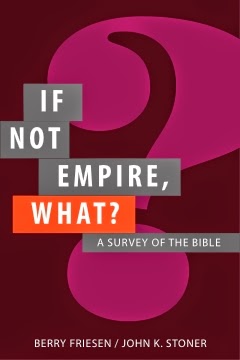 “Empire” is a concept one finds increasingly in political analysis and ethical thinking. The contrast between those who promote imperial ways of thinking and those who emphasize peace, love and reconciliation permeates what Friesen and Stoner label the First and Second Testaments. The contrast is similar to the way peace-minded churches emphasize the separation of church and state or hold to a two-kingdom means of understanding the Christian stance in the world.

In this study of politics and Scripture, “empire” is defined as a system of coordinated control that “exalts itself, establishes its own secret purposes, resists accountability to anyone or anything, thrives through deception and violence, co-opts or suppresses all alternatives and delivers us into the hands of death.”

Friesen and Stoner are not anarchists. They “understand government to be a helpful structure to serve limited purposes within the requirements of justice and public accountability.” They trace political interaction and insight from Genesis to Revelation. They focus on how each biblical personality, situation and analysis “speaks to the political dimensions of life: the framing of public issues, how collective action is organized, what purposes and tactics are judged to be legitimate and how power is exercised.”

The authors cite every book of the Bible, sometimes for only one paragraph, other times for many pages. Friesen and Stoner adopt a chronological approach rather than the sequence used in the two testaments. The close reading means both context and interaction with other themes are severely limited. This is an intense study that surely will strain some readers. Indeed, the intensity is so great that striving to read from cover to cover is not an easy task.

Nonetheless, this is a significant book. By concentrating on the politics of the Bible, the reader soon realizes that this is no peripheral topic. Indeed, each critical moment in the biblical story has a political context and political message. For example, Jesus was born during an imperial census, was protected by Egyptian authorities, lived his life in the midst of religious, imperial and local political tensions and died at the command of these three authorities.

Readers will be challenged by the underlying claim that “there is a way of life within our grasp that leads to social justice, peace and prosperity.” I wish the authors would have spelled out the implications of this claim.

This inductive study — unraveling the biblical texts — also illustrates some limitations. Bible texts frequently borrow from other parts of Scripture, which also provide helpful interpretation. The Bible was written in a historical context. Some reference to ancient history and comparative political theories would strengthen the analysis. Indeed, the history of biblical interpretation could be helpful in identifying differences in language usage and in how words and concepts have been defined then and now.

In the concluding chapter, the authors say the Book of Revelation’s “grim scenes . . . are all about the consequences of the way the empire runs the world.” Yet the writer of Revelation envisions “the kingdom of this world becoming the kingdom of our God and his Messiah.” The authors might have more strongly suggested the role of the faithful in the realization of this hoped- for future.

My critique of this book has little to do with its contents. I wish the authors would have said more about why they addressed this topic at this particular time and place and provided a more comprehensive narrative.

The book is available free as a PDF document at bible-and-empire.net, which also features a blog by the authors.