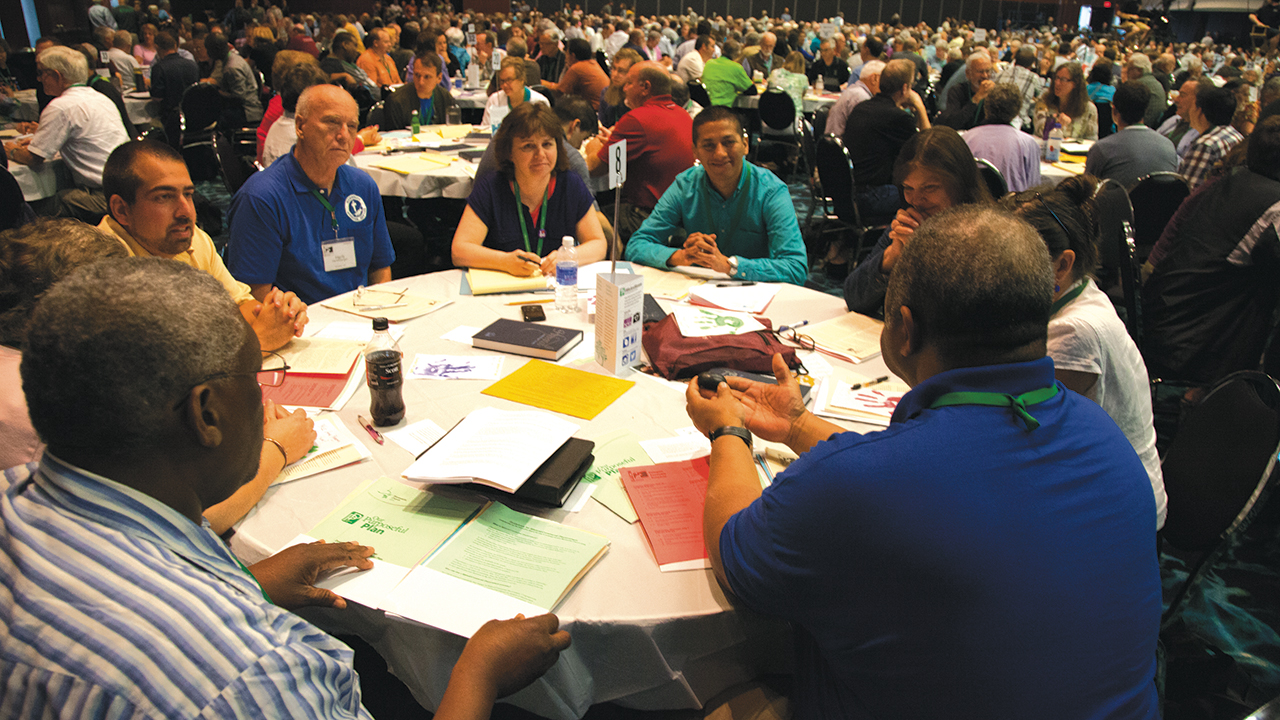 Mennonite Church USA delegates in Kansas City, Mo., in 2015 passed resolutions to forbear with each other in the midst of differences and to reaffirm the Membership Guidelines. — Lowell brown for Mennonite World Review

At a special assembly of Mennonite Church USA on May 27-30 in Kansas City, Mo., delegates will consider lift­ing a ban on same-sex marriage and taking a more dramatic step if they expand the agenda to weigh a broad proposal for LGBTQ affirmation.

Delegates will look at two resolu­tions to repeal the Membership Guidelines, a document that cleared the path for a denominational merger 20 years ago by barring pastors from officiating same-sex marriages.

Preserving the current policy seems unlikely. The Executive Board does not have the power to enforce it. The majority of conferences allow pastors to break the rule with impunity. It doesn’t make sense to keep it on the books.

The simplest action would be to pass the Executive Board resolution to “retire” the Membership Guidelines. This would align policy with practice — and stop there. Although in essence a housekeeping action, it would still be an LGBTQ-inclusive step: The church would no longer be on record as disapproving of same-sex marriage in this key document.

But neither would it be LGBTQ-­affirming. This is the difference between the Executive Board resolution to “retire” the guidelines (which some interpret as saying they served well) and the Inclusive Mennonite Pastors’ resolution to “rescind” them (meaning: good riddance). The latter would not only repeal the guidelines but also confess harm, affirm the spiritual gifts of LGBTQ people and commit to inclusive practices.

With these unprecedented statements and directives, the In­clusive Pastors’ resolution, called “Repentance and Transformation,” proposes a major step toward LGBTQ affirmation.

The resolution needs to clear two hurdles: Delegates will process it only if they first vote to add it to the agenda.

One of the resources for delegates says the Executive Board ­resolution “does not speak to the merits of LGBTQ inclusion.” Its introduction ­offers neutral comments; the resolution itself is only one sentence long.

By contrast, “Repentance and Transformation” speaks extensively about the merits of inclusion and the harm of exclusion. It delivers a stinging rebuke to a peace church: Current MC USA policies, it says, “do violence to LGBTQIA people by failing to affirm their full, God-given identities.”

The resolution commits the denomination to several inclusive actions. Among them are creating an LGBTQ constituency group with representa­tion on the Constituency Leaders Council, providing support and resources for LGBTQ leaders and “embody[ing] a theology that honors LGBTQIA people and relationships with all future MC USA theological statements” such as revisions of the Confession of Faith.

“Repentance and Transformation” could reasonably be understood as putting MC USA on record as LGBTQ-­affirming — in contrast to the denomination’s Confession of Faith. It could also be read as a rejection of statements passed in 1986 and 1987 by MC USA’s predecessor denominations that define same-sex sexual activity as sin.

Presented by the MC USA Executive Board, this resolution would “retire” the Membership Guidelines.

“Resolution for Repentance and Transformation”

Written by the Inclusive Mennonite Pastors group, this resolution would “rescind” the Membership Guidelines, confess that MC USA “policies, struc­tures, practices and theologies . . . have caused great harm to LGBTQIA Mennonites and their families” and commit to inclusive actions at the denominational level. Delegates will discuss and vote on this resolution only if they first vote to add it to the agenda.

“For Justice in the U.S. Criminal Legal System”

Presented for discussion but not a vote, this study resolution calls MC USA to confront injustice in the U.S. criminal legal system. It advocates reforms, including “ending cash bail, enacting policies mandating reductions in police violence [and] ending mandatory minimum sentencing.” It says the “U.S. criminal legal system, at its core, promotes violence and punishment, not reconciliation and peace.”

MC USA staff will work with the writers of the resolution and various groups over the next biennium to explore and discuss the concepts and resources outlined in the resolution.

This resolution would commit MC USA members, congregations and organizations “to deepen our understanding of barriers for people with disabilities, to take action to make our community life and facilities accessible and welcoming to all, and to discern and affirm the gifts of each person for our common good.” It suggests actions for congregations, including “developing a plan to increase accessibility.” Its purpose is to help members “recognize and seek to remove barriers to belonging in architecture, communications and attitudes that prevent individuals with disabilities from participating in church life.”

“Repentance and Transformation” stands in contrast to past ­documents and policies that put LGBTQ-­affirm­ing members in the position of dissenters. In the past, LGBTQ Mennonites and their allies measured progress by the extent to which they were tolerated. With this resolution, the dissenter label would not entirely ­disappear; the Confession of Faith still affirms only heterosexual marriage. But the stigma of dissent would diminish. LGBTQ Mennonites would gain official affirmation “to give and receive every gift in the body of Christ.”

This proposed affirmation leads some to ask: Where would “Repentance and Transformation” leave traditionalists? Some say that if delegates pass such an unreservedly LGBTQ-affirming resolution, it will feel like there is hardly any place left in MC USA for those with conservative views. They say traditionalists would become the dissenters, the ones asking to be tolerated.

Certainly, it is hard to read a resolution that clashes with one’s beliefs and not feel discomfort, perhaps even rejection. If “Repentance and Transformation” passes, it might lead to more departures from the denomination.

However, it is important to note what the resolution does and does not do. The commitments it makes are at the denominational level; it would not force any conference or congregation to violate their beliefs. Conferences and congregations will continue to do what their people generally want — credentialing and hiring LGBTQ pastors, or not; allowing pastors to officiate same-sex marriages, or not. In MC USA, most authority is held regionally and locally, not nationally.

One Point in “Repentance and Transformation” that draws attention is the prospect of changing the Confession of Faith. The impact of the commitment to “embody a theology that honors LGBTQIA people and relationships with all future MC USA theological statements” is not clear. Some doubt that the Confession is revisable or that it’s possible to give orders to the future writers of a new one.

Some would like a shorter and simpler Confession — similar to Mennonite World Conference’s “Shared Convictions” — that takes no position on same-sex marriage.

The list of points delegates might debate is long. All of MC USA needs to be in prayer for their deliberations on all four resolutions, including the ones on criminal justice and accessibility for people with disabilities.

By April 25, 383 delegates from 202 congregations had registered.

The special assembly will be an opportunity to show whether or not MC USA is locked in an intractable conflict over human sexuality. It will be a time to forbear with each other, as previous delegates have promised, and to listen with special care to those who’ve been excluded and hurt.