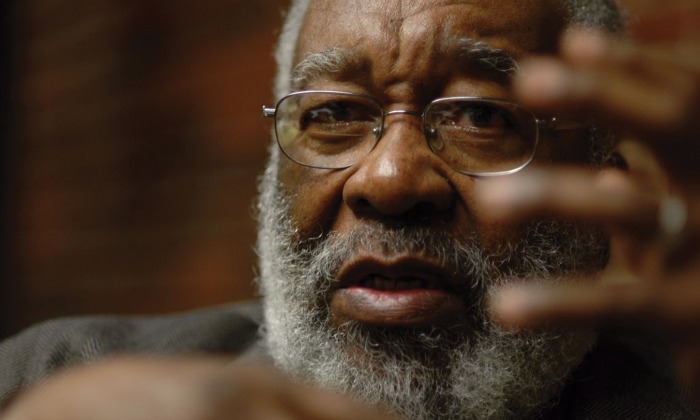 In January 2012, I was driving in the flatlands of northern Indiana with historian and democracy activist Vincent G. Harding. I was Harding’s tour guide and chauffer for the week. As we drove he asked me what I hoped to happen at an upcoming meeting.

“We’re open to whatever you feel inspired to share with us,” I responded.

He replied, “Joanna, this is your community. I want to hear from you what is important in this conversation. You know better than I what your community needs to be discussing right now.”

This was the organizational formula Vincent Harding had been using for more than 50 years: Bring people together, remind them of the strength of their roots, listen to their wisdom, and connect them to a broader biblical and historical movement.

Harding, who died May 19, 2014, was a lifelong activist for the development of a compassionate, multireligious, multiracial democracy and a leading historian in the black-led freedom struggle in the U.S. Harding and his spouse, Rosemarie Freeney Harding, who died in 2004, had been colleagues of Martin Luther King Jr. and Coretta Scott King in the 1960s, and Vincent later became the first director of the Martin Luther King Jr. Center in Atlanta.

When historian, author, and longtime friend P. Sterling Stuckey heard about Harding’s death, he said he found it hard to believe because “Vincent was larger than life.”

Harding’s effect on movements for justice in the U.S. was far-reaching. He was a convener of scholars, activists, artists, youth, and people of faith. He believed that transformation happened when everyone was engaged and contributing—and he believed that everyone had something to offer in the creation of a compassionate, multiracial democracy.

In 2012, Harding served as the distinguished Martin Luther King Jr. scholar-in-residence at Morehouse College in Atlanta, where he taught a course on King and the future of America. A trained historian, Harding valued much more than the historical record found in books. He valued the embodied texts of the living. History is also found in the songs of lament and defiance, he said, the poems of hope and despair, the wailings of anger and mourning, and the dances of freedom and beauty.

Baker was a powerful teacher in the movement, especially mentoring younger organizers. After Harding spoke during a mass meeting in Albany, Ga., in the mid-1960s, Baker gave him critical advice. “The people are hungry,” she told him. “You must not merely excite them. Do not stand in front of them unless you have something to teach.”

These formative words were emblematic of the mutual learning that happened throughout the Southern freedom movement. When speaking of King’s legacy, Harding often recalled that teachers such as Baker put King in his proper context. “[King] was created by the movement, and he also created parts of the movement,” Harding told me in 2011. “We were brothers. And sometimes we were just two short guys, at 5 feet 8 inches and 5 feet 9 inches, trying to play basketball at the retreats.”

Part of the reason Harding was able to envision such sweeping social change was because his own life told the story of transformation.

Born in Harlem in 1931, Harding was raised by his mother, Mabel L. Broome, and the close-knit congregation at Victory Tabernacle Seventh-Day Christian Church. Harding said it was a place where “everyone knew my name, and everyone loved me, and everyone pushed me to be my best self.”

At 22, Harding was drafted into the Army. He set his sights on officer candidate school with a commission in military intelligence. But during basic training he began studying the Bible, and something in him began to shift. While his church had focused on the Old Testament, he now found himself drawn to Jesus and the New Testament. One day in bayonet training, Harding recalled a familiar song: “Jesus loves the little children, all the children of the world.” Then in his mind he heard a chilling addition: “And when they grow up, and your country declares that they’re enemies, you’re going to cut their guts out.”

“I did not know that, in those long wrestlings with the text and Spirit, I would be engaging in a major step on my journey beyond the borders of the loving family-tribe of believers at Victory Tabernacle.” It became clear to Harding that he could not pursue a life in the military and be a follower of Jesus.

After he was discharged in 1955, Harding attended the University of Chicago for a graduate degree. While studying Christian history, he came across the Anabaptists. “I [was] deeply impressed by the fact that, for hundreds of years, some people within the Christian faith had believed all the things that I had recently come to believe,” Harding said.

In Chicago, Harding met Elmer Neufeld from Woodlawn Mennonite Church and Delton Franz, Woodlawn’s pastor, both of whom were white. Seeking to build a multiracial congregation, they asked Harding to join as a co-pastor. In 1958, those three—along with Glen Bayes and Ed Riddick, who was also black—traveled south to learn about the freedom movement. It was the first time Harding had been in the South. In Montgomery, Ala., he met Martin and Coretta Scott King for the first time.

King was recovering from a stab wound, so the visitors were ushered into his bedroom. In his pajamas, King jokingly congratulated them on making it through Mississippi. As the visit ended, King looked at Harding and Riddick, saying, “Now you guys, you’re Mennonites, and you know something about nonviolence. You understand what we’re trying to do down here. You ought to come back and help us.”

This powerful encounter was a turning point in Harding’s life—one that would move him beyond the borders of the Mennonite Church and into the heart of the black-led movement for the deepening and broadening of democracy in the U.S.

The Hardings traveled across the South, speaking, teaching, organizing, and meeting with white people who wanted to support the freedom struggle. “[King] wanted us to do this because we weren’t on staff with any of the movement organizations,” Harding said. “We were in our role as Mennonites and were representing the Mennonites. This opened doors because we were a young black couple—and eventually a young black couple with a little baby—who were a part of this crazy group of people called the Mennonites. What could be less threatening than that?”

Most critical, this work drew the Hardings—and they drew King—deep into the heart of the Albany Movement, in Albany, Ga., the first mass movement with the goal of desegregating an entire community. More than 1,000 African Americans were arrested, but the campaign ultimately failed to make major change. It was, however, King’s first major involvement in such a campaign, and it set the stage for the organizing strategy and ultimate success experienced later in Birmingham, Ala.

Over Christmas break in 1966, Harding drafted for King what became one of King’s most incisive and controversial speeches. King delivered “Beyond Vietnam: A Time to Break the Silence” at Riverside Church in New York City on April 4, 1967, in which he spoke out against the Vietnam War and took on “the giant triplets of racism, extreme materialism, and militarism.” Many civil rights leaders, as well as major newspapers, publicly condemned King for the speech. A few months later, King called Harding to say, “Vincent, you see what kind of trouble you got me into?!”

“[King] was more exposed as a result of taking that stand,” Harding said in a 2007 interview with Sojourners, “but he knew he was going to be more exposed. When he was assassinated, precisely a year to the day after that speech, on a very personal level—in addition to all the sense of loss I felt in terms of my friend—I also had some deeply difficult feelings about the possible ways I had contributed to the forces that led to his assassination. I was working on that guilt and grief combination for a while.”

In the 1980s, Vincent became professor of religion and social transformation at Iliff School of Theology in Denver and served as chief historical consultant for Eyes on the Prize, the award-winning documentary on the Southern freedom movement.

Producer Orlando Bagwell recalls Harding telling him, “Brother Orlando, stories are not useful unless they serve the public learning and questioning.”

Over the years the two men worked together on numerous historical and cultural films. Harding became Bagwell’s teacher, confidant, and friend. “Vincent helped me see that life was not about how well people spoke about us in death but about how much our deeds and actions contributed to living,” Bagwell said.

In 2003, the Veterans of Hope Project, which Vincent and Rosemarie founded in the late 1990s, launched Ambassadors of Hope, a youth leadership program. Drawing on history, culture, and spiritual traditions, these young leaders learn about the development of democracy.

One Ambassadors of Hope participant was Lalo Montoya, a Dreamer who grew up in Denver. Often, Montoya said, he felt caught between two worlds—never being Mexican enough and never being American enough. “Uncle Vincent [as Harding was known to many younger people] encouraged me to see my bicultural identity as a gift rather than a burden, and as an opportunity to help others learn,” said Montoya, now a seasoned immigrant-rights organizer.

A few years ago at an Ambassadors of Hope gathering in Denver, two teenagers from Philadelphia had a question for Harding: “Uncle Vincent, why do you love us so?” These teenagers articulated what many felt in Harding’s presence—a deep abiding love. Harding never shielded himself from pain or despair. Instead he looked at it all with unflinching hope. His hope was not optimism, but an unfaltering belief in the human capacity for transformation through love.

Harding would be the first to say that the story of his life is the story about the movements that shaped him and that he helped shape. It’s about the people that “loved him into life,” the theme of his unfinished memoir. He was not looking for a hero’s pedestal in life, or in death. He knew that movements for justice were not about the heroes. Rather, they happened because of the commitments of multitudes of people hidden from the public eye. They happened because communities were willing to take risks together, to sing songs of resistance, to learn from their young people, and to remember the elders who had gone before.

Joanna Shenk, associate pastor of First Mennonite Church of San Francisco, is editor of Widening the Circle: Experiments in Christian Discipleship and co-producer of the Iconocast podcast. Photo by Photo by Ryan Rodrick Belier.