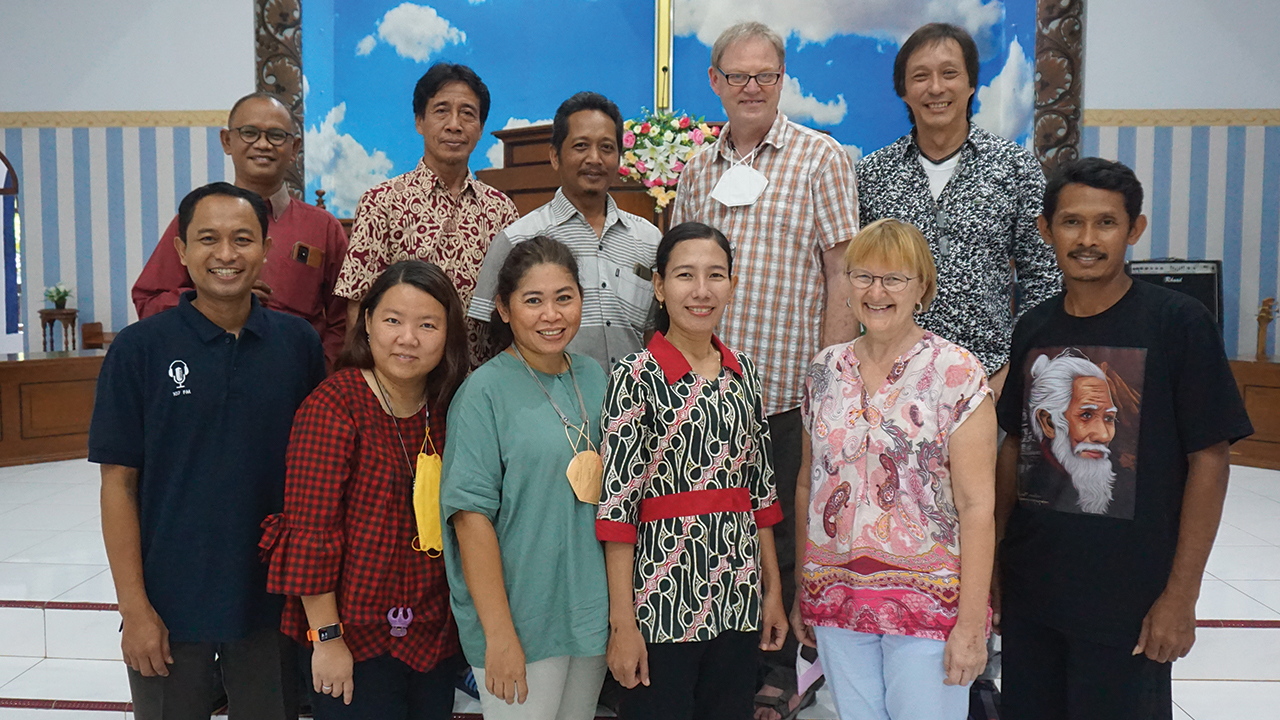 Pasaduluran is Javanese for “brotherhood” or “sisterhood”

For more than 300 years, the Anabaptist family consisted almost entirely of European-background people. That changed in the 1850s when Dutch Mennonite missionaries arrived on the island of Java in what was then known as the Dutch East Indies.

The introduction of Anabaptism to Indonesia began the process of the Anabaptist churches becoming no longer mostly white. Today, 81% of Mennonite World Conference members reside in the Global South.

The Mennonite presence in Indonesia has expanded global Anabaptism’s interreligious relationships. In the nation with the world’s largest Muslim population (over 230 million, 87% of Indonesians), Anabaptist-Mennonites are part of a 10% Christian minority.

In Indonesia, churches are known simply as Christian. People generally do not have much interest in denominational distinctions beyond the broad categories of Catholic and Protestant. Indonesia officially recognizes six faith groups: Muslim, Protestant, Catholic, Buddhist, Hindu and Confucian. (Protestants are about 7% of the population, Catholics 3%.)

With a total membership of nearly 108,000, Indonesian Mennonites are organized into three conferences, which are known as synods and abbreviated as GKMI, JKI and GITJ.

Indonesian Anabaptists are active, interfaith peacemakers. The gospel of peace is an expression of paseduluran, a Javanese word for brotherhood or sisterhood.

One example of boldly paving a new frontier is the relationship between GKMI’s Mennonite Diakonia Service and the Hezbollah Muslim group in Solo. Partnering on disaster relief, MDS director Paulus Hartono has developed positive relationships between Mennonites and Muslims.

Assisted by Mennonite Central Committee, Indonesian Anabaptists have opened a master’s-level peace and conflict studies program at Universitas Kristen Duta Wacana. This was the first peace studies program recognized by the Indonesian government. It has resulted in peacebuilding courses being offered in many Christian universities.

Anabaptist-Mennonite churches and individuals have created education projects and communities that foster peace. These include:

— Creating a peace village that mobilizes people to work together in developing economic welfare and peace values;

— Doing joint efforts with Islamic boarding schools to establish a peace library; and

— Networking with institutions and individuals from various religious backgrounds to foster peace.

— The church’s mission is understood not as proselytism, or trying to win converts, but as reconciliation.

Birth of a closer relationship

In July 2009, leaders from the three Indonesian Mennonite synods, or conferences, found themselves in conversation outside a dormitory in Asuncíon, Paraguay, where they had come for the 15th Mennonite World Conference assembly.

Although they were not strangers, their paths rarely crossed. Singing together at one of the assembly’s worship services was their first time completing a task together.

The three groups they represented had complex histories that included separation and division. But that day, when they sang together, they chose a popular Indonesian song, “In Jesus We Are Brothers and Sisters.”

Something changed in their relation­ship.

“We realized that all of us were of a similar age and that we shared many of the same concerns and values,” said David Meijanto, vice president of JKI (Jemaat Kristen Indonesia).

For the first time, they asked: Why don’t we get together more often back in Indonesia?

The church leaders returned to Indonesia with a commitment to meet every three months to share together and encourage each other.

At one of these “Indomenno” meetings, the idea emerged that the three groups could together host the 2021 MWC global assembly (later postponed to 2022). The MWC General Council accepted their proposal during its 2012 meeting in Basel, Switzerland. — Elina Ciptadi, Mennonite World Conference

The JKI synod has been exemplary in outreach, especially to youth. The church founded and continues to support the largest interdenominational youth conference in Indonesia, Unlimited Fire Youth Conference, which brings together hundreds of churches and thousands of young people.

Jakarta Praise Community Church raises passionate disciples who love serving God through music, multimedia, teaching, technology and the arts. Music written and composed by members of the JKI church makes an impact not only on Indonesian Christians but all over the world. Albums have been translated into English, Thai, Japanese, Mandarin and Korean.

JKI supports a mission base in Sumba. Children are sponsored for school, and villagers are trained to weave traditional tenun fabric, which is sold nationally and internationally. JKI is building an irrigation system and promoting alternative agricultural methods to help communities raise their standard of living.

Near Batam, JKI is reaching out to the “Sea Tribe People” (Suku Laut) who live on Indonesia’s outer islands and on boats. With minimal electricity and internet connection, many live far from stores or restaurants. They used to have to travel eight to 10 hours by boat to hear the gospel at church services in Batam. Now there are several churches among the Sea Tribe People.

The mostly rural congregations of GITJ live out peace in their communities. They are involved in social assistance like medical care, regardless of religion. A congregation in Magorejo has begun a project of reforestation of mangrove forests.

GITJ shares the gift of contextualization. Using art and traditions from Javanese culture, its members show how the gospel is relevant in Indonesia.

As Christians in a Muslim-majority country, Indonesian Mennonites face challenges. Sometimes there are restrictions on when and where people can gather for fellowship or worship. There are obstacles to obtaining permission to build a church.

For 12 years, one GITJ congregation in the Jepara region petitioned municipal officials for permission to use a church building. With persistence and peacefulness, they built relationships with government officials and people from different religions. The request was finally granted.

The rise of identity politics — especially religious and ethnic identity — has made it difficult to promote peaceful coexistence. Social cohesion breaks down when a privileged group feels superior and disrespects others.

Violence — in the form of hate speech, discrimination and exclusion — easily follows. Conflict takes place not only between groups but within groups. Indonesian Anabaptist-Mennonites are not exempt.

Other challenges include secularism and modernization, which lead young people to avoid churchgoing. Churches connect with the younger generation by engaging through multimedia, ­social media and creative activities.

Indonesia’s Mennonites love their neighbors in a holistic way. When parts of Semarang were flooded in February 2021, church members traveled by raft to help families escape their submerged houses. They delivered food to families in need and provided shelter for people who evacuated.

In the past, the relationship between the three synods was not intimate. An exception is the Mennonite seminary in Pati, the fruit of a partnership between GITJ and GKMI.

In the last decade, “Indomenno” has created a new way of partnering. This effort of the three synods includes partnering with MCC and hosting the Mennonite World Conference assembly July 5-10. After postponing the assembly in 2021, leaders had to rework the agenda to prepare for the event once again.

“We remain solid and one-hearted in supporting this assembly,” said Eddy Suyanto of JKI. “We are blessed and honored that our global brethren can visit and see what God is doing in Indonesia.”

The writers are leaders in the three Indonesian Anabaptist-Mennonite synods. This article was distributed by Mennonite World Conference.